U.S. President Donald Trump will reportedly sign an executive order as early as today that would modify Section 230 of the Communications Decency Act — a critical law that protects online platforms that moderate or censor offensive content from charges such as libel and First Amendment violations. The order appears tailored to hurt the largest platforms like Facebook and Twitter the most.

Kate Klonick, a fellow at Yale Law School's Information Society Project, published a draft of the executive order that she was able to obtain overnight. The gist is that the Department of Commerce would petition the FCC to clarify Section 230 as to not protect online platforms from First Amendment lawsuits for editorial conduct, which includes actions that are:

On Tuesday, Twitter embedded links to fact-checking articles within two of Trump's tweets about the likelihood of voter fraud with mail-in ballots. California had announced earlier this month that it would conduct this November's general election completely by post.

....living in the state, no matter who they are or how they got there, will get one. That will be followed up with professionals telling all of these people, many of whom have never even thought of voting before, how, and for whom, to vote. This will be a Rigged Election. No way! 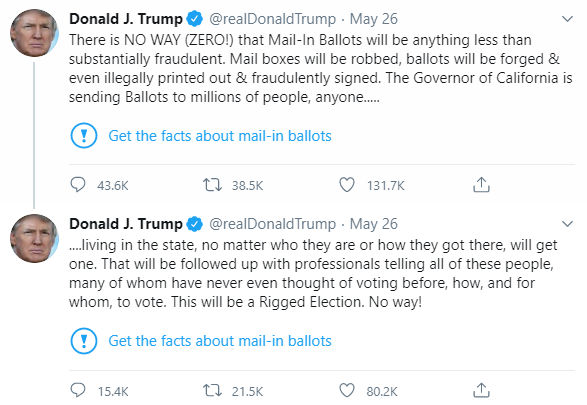 Twitter stated that it had taken this action in line with its civic integrity policy. The president quickly snapped back at the social media company, saying that it was stifling free speech, then promised "big action to follow."

The order as drafted would also ban federal ad spending on sites that practice editorial conduct, have the Department of Justice collaborate with state attorneys general to target bias on tech platforms, and require the FTC enforce the new rules and bring lawsuits based on complaints.

CNN reports that FCC officials were alarmed when they were made aware of a draft order as far back as last summer.

After further revisions, President Trump signed the executive order last night. In addition to social media platforms, the commander-in-chief also made mention of a U.S. company that was interested in creating a modified, censored search engine for use in China — presumably referring to Google and its shelved plans for Project Dragonfly.

As the order provides, the executive branch will attempt to enforce Section 230 under its narrow interpretation as described in the story above, then file a rulemaking petition with the FCC within the next 60 days.