If you ask Verizon, they'll tell you gigabit 5G is only possible with the power of (seriously difficult to deploy and expensive) mmWave technology. Recent tests of T-Mobile's fully live 5G mid-band network in New York City would like to have a word with Verizon on that point, though: testers have begun cracking the gigabit barrier on some handsets, as revealed in SpeedTest.net's latest reporting.

There are certainly asterisks to the 1.2Gbps Milan Milanovic observed in his testing, but they're obvious ones: the network is very lightly burdened at present, and he was only able to get the very highest speeds using LTE-5G EN-DC (Dual Connectivity) mode, which aggregates LTE and 5G signal into a single, powerful connection for large downloads. Phones like the OnePlus 8 Pro support this feature (weirdly, the Galaxy S20 family does not), and that's what got Milanovic through the gigabit ceiling. He estimates that around 75% of that speed came from the 5G mid-band network alone, while the remaining 25% (~300Mbps) was via T-Mobile's LAA (Licensed Assisted Access) band over LTE. LAA is essentially Wi-Fi that your phone picks up as mobile data signal, and T-Mobile has significant deployments of this technology across the US. While LAA has very limited range (about the same as your home router's), it can offer far more speed in dense environments. But let's talk a bit more about that mid-band stuff.

The biggest change in the last month to T-Mobile's 5G has been in increasing and widening deployments on the 2.5GHz band. T-Mobile is now leveraging up to 60MHz of bandwidth in key markets like NYC and Philadelphia, and it's paying off in a big way. 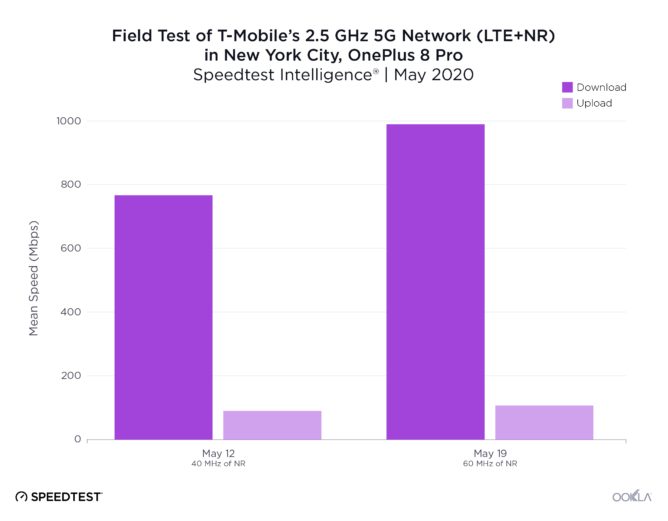 While these figures are on a network with very, very few active connections and during a time of particularly low cellular congestion, they speak volumes about mid-band 5G's promise. Even if a fully loaded T-Mobile mid-band network offered speeds were just twenty percent of what's been observed here, that'd still have it hovering around 200Mbps. That's far faster than typical American home broadband internet, and about six times as fast as typical US LTE coverage.

While the true average speed of T-Mobile's 5G network in NYC remains relatively low (around 100Mbps according to SpeedTest.net), that's largely a result of coverage taking time to deploy. By the end of the year, T-Mobile will have thousands upon thousands of new mid-band 5G sites around the US, and I suspect it will absolutely tear away from the pack in national speed tests. AT&T and Verizon have essentially nothing to counter T-Mo's mid-band network, either: both will rely on DSS (Dynamic Spectrum Sharing) low-band 5G, which should offer speeds about 20% better than LTE where available, but they're otherwise hamstrung. Neither will have significant mmWave deployment even in the markets they cover, as that really is a block-by-block operation. And for all Verizon's mmWave bluster, no serious commentator in the industry disputes that mmWave simply cannot provide the kind of saturation coverage mid-band 5G enables—it really is just physics.

T-Mobile's newly-acquired Sprint spectrum will only speed these improvements along, as it now controls a total of over 300MHz of sub-6GHz bandwidth across key markets in the United States, setting the stage for a truly massive capacity expansion. AT&T and Verizon's low-band 5G will achieve breadth of coverage, but it will quickly become apparent just how deficient they are on speed compared to the new T-Mobile, and I suspect subscriber bleed may start to follow. The one downside for T-Mobile is 5G handset penetration: it remains incredibly low. The Galaxy S20 launched just as coronavirus locked down much of the United States, and along with help from their legitimately shocking prices, sales have been terrible. The second half of the year should see 5G phones pick up steam again, though, as Apple's entire iPhone 12 portfolio is set to include compatibility for all carriers' sub-6GHz 5G implementations. Once those phones go on sale, T-Mobile's 5G impact will really start to be felt, and I suspect reviewers and other tech notables will pick up on T-Mobile's 5G advantage pretty quickly at that point.

The potential upshot here for those on the larger two US networks could be pricing, though. If AT&T and Verizon feel T-Mobile's competitiveness on network is starting to really cut into their post-paid subscribers, the likelihood they'll react with promotions and discounts increases substantially. At that point, the ball is in T-Mobile's court, and as a company, it's never been shy about cutting prices if it means growing the business. So, perhaps we'll see a bit of a coronavirus wireless price war this fall.

AT&T and Verizon will have to wait until December to plan their next 5G moves, when the FCC will auction 300MHz of the C Band, prime mid-band real estate. Even then, that means the resulting network deployments won't get underway until Q1 2021 at the earliest, and it remains unclear how or if Verizon and AT&T will be able to get compatible handsets out the door fast enough. By Spring of 2021, T-Mobile will be on its second generation of mid-band handsets—AT&T and Verizon probably won't get their first ones until summer, and realistically won't see any significant adoption until fall of 2021 with the iPhone. This gives T-Mobile a truly enviable amount of runway to work with as its mid-band network scales and its competitors are essentially left with their hands tied behind their backs. And whatever T-Mobile is doing to capitalize on that, it already seems to be working: the company netted a staggering 450,000 new subscribers in its most recent earnings report, while Verizon lost 500,000.

All in all, it seems the stage is set for the new T-Mobile to become a much bigger player in the US wireless landscape, and its progress should have AT&T and Verizon worried.

This viral video shows how the Pixel's live voice transcription absolutely destroys the ...