The new bands that the upcoming Wi-Fi 6E standard depends on have only recently been approved for use by the FCC, but Qualcomm's been ready and waiting. The company has just announced two new products that will be Wi-Fi 6E compatible when they eventually land in as-yet-unannounced chipsets, with the higher-end version available in hardware as soon as the 2nd half of this year. 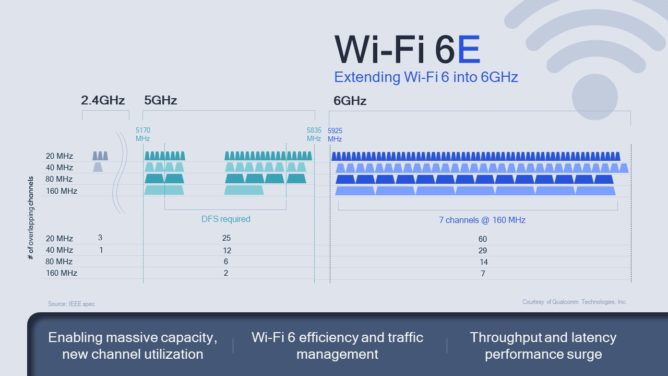 Look at all those new channels in Wi-Fi 6E.

If you're not familiar with Wi-Fi 6E, the (very) short version is that it's a new Wi-Fi standard that takes advantage of newly freed-up 6GHz bands. Right now, the 2.4 GHz and 5GHz frequencies are pretty damn congested and noisy in dense areas like city apartments or downtown offices, and neither is actually a very big chunk of spectrum in the grand scheme of things. The new 6GHz band is huge, with plenty of new channels just waiting to be used, offering between 2-6x the capacity of existing bands in Qualcomm's varying estimations. More capacity means less congestion, bigger channels, and faster speeds. Unfortunately, your existing hardware can't take advantage of these improvements, and hence today's announcement.

As the company told us back in April, there weren't any big technical challenges waiting to be resolved, Qualcomm has been preparing for the spectrum to be made available for years, and it implied to us then that hardware was basically ready and waiting to be revealed. And here it is. 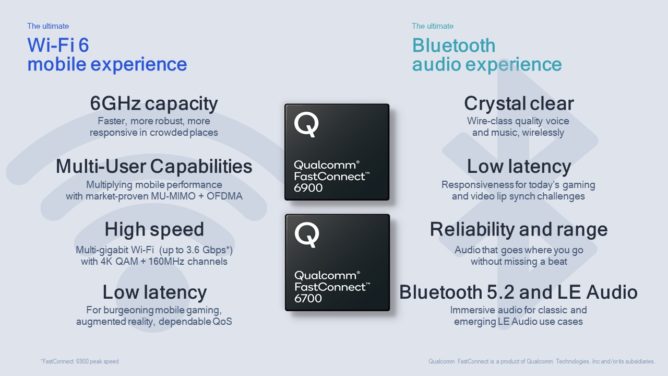 The new FastConnect 6900 and 6700 both support multi-gigabit Wi-Fi using Wi-Fi 6E based on the currently drafted standards, as well as Bluetooth 5.2. There's one big difference between the two: the 6900 can do 2x2 dual-band simultaneous connections, while the 6700 can't. In practice, that means you'll see a difference in maximum speed between the two products — up to 3.6Gbps for the 6900, and near 3Gbps for the 6700. They otherwise support the same standards, including 4K QaM, 160Mhz channel sizes, MU-MIMO, and OFDMA, all with lower potential latency. New Bluetooth benefits include support for two antennas with intelligent switching, multi-point audio, and Qualcomm's aptX.

As with its modem pipeline products, Qualcomm is offering end-to-end solutions for smartphone makers that don't want to waste their time working out engineering kinks with amplifiers and antennas, though it isn't forcing that bundling on manufacturers if they don't want it.

You might not be familiar with "FastConnect" as a product, but you've probably heard of "Snapdragon" — the former is the Wi-Fi and Bluetooth solution that ends up appearing inside the latter. So while you won't be buying a phone with the FastConnect name in mind, you will see both of these products announced today appear in future Snapdragon-powered phones. Qualcomm tells us the 6900 will end up in an unnamed hardware platform (read: a Snapdragon chip) launching in the second half of this year, while the 6700 is planned for a bit further out, as soon as early next year.