Google Voice has long been one of Google's most confusing and most useful products, and since becoming part of G Suite in 2018, it has started receiving a bit more love when it comes to updates. It gained a dark theme and support for VoIP calling last year. Now the service is prepping the ability to transfer ongoing calls to other numbers and contacts.

According to a newly-published support page, users will be able to transfer outgoing and incoming calls to another number. Once connected to a call, a new Transfer button will appear in call options, letting users select from existing contacts or enter new numbers.

After that selection is confirmed, Voice will connect the current caller with the new one. The documentation reports that initiating a transfer on Android will place the call on hold while the new selection is made, but doesn't confirm the same caveat for transferring via computer or the iOS app.

While there hasn't been any existing way to transfer calls like this, Voice has long supported the ability to move an ongoing call between your own Voice devices.

Proper support for transferring calls between numbers should be a useful capability for many people. Though the feature isn't live yet, Google has confirmed it will be coming soon.

Google officially announced the call transfer feature in a blog post today. "In a few simple steps," the company wrote, "you can send a call to the appropriate person, whether that’s an intelligently-suggested contact, searching in your directory or a manually entered phone number." It should be available soon on the Android, iOS, and web applications. 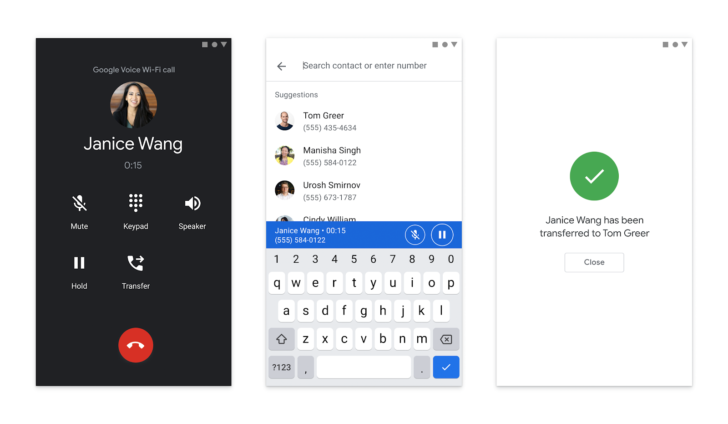 Google also revealed that Voice will soon appear on the sidebar in the Gmail web app, alongside the existing shortcuts to Tasks, Calendar, and Keep. "Google Voice in Gmail looks similar to the call panel in the Voice web application, allowing you to answer calls, make new outbound calls, and easily transfer calls."

This viral video shows how the Pixel's live voice transcription absolutely destroys the ...