The app itself received surprisingly good reviews, racking up a 4.2 star rating with over 800 submissions from its 5,000+ users. That's not a bad haul—and a shockingly decent review score—for an app that was around for just a short time, though many likely found it by attempting to search for Dark Sky and ended up on this app's listing by mistake.

The developer claimed it never meant to pass off the app as official, calling it a "Dark Sky alternative" in the original app description, and repeated this sort of language in response to reviews that called out the app's deceptive nature. That was unlikely to ever pass muster, though: the obvious issues aside, the fact that the app used Dark Sky's own weather API to gather weather data meant it would stop functioning at the end of 2021 anyway, as Dark Sky's new owner Apple plans to shutter access to it at that time. Given this developer was charging $6.50 for a lifetime ad-free experience as an IAP, that makes this seem a little slimier than first glance might suggest.

Predictably, the developer since relaunched the app, under the new name "Dark Hyperlocal Forecast" which probably isn't going to fare as well.

After it was announced that popular weather app Dark Sky had been acquired by Apple and would be shutting down its Android app, fans of the service were understandably upset. So upset, in fact, that they proceeded to 1-star bomb the app's listing on the Play Store, which now sits at a pathetic 1.5 stars. A, let's say "enterprising" developer in Turkey apparently saw an opportunity here to create a replacement for Dark Sky. And by replacement, I mean a pretty shoddy knockoff (and also an open and shut case of blatant trademark infringement). 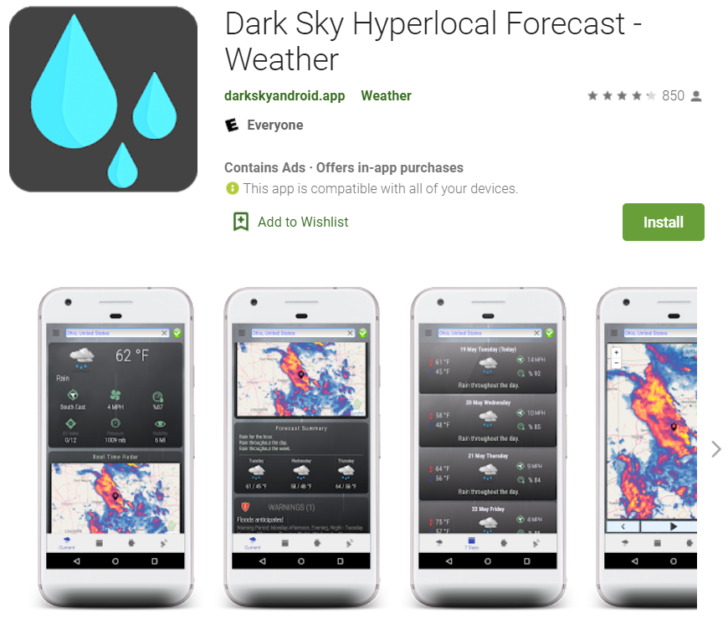 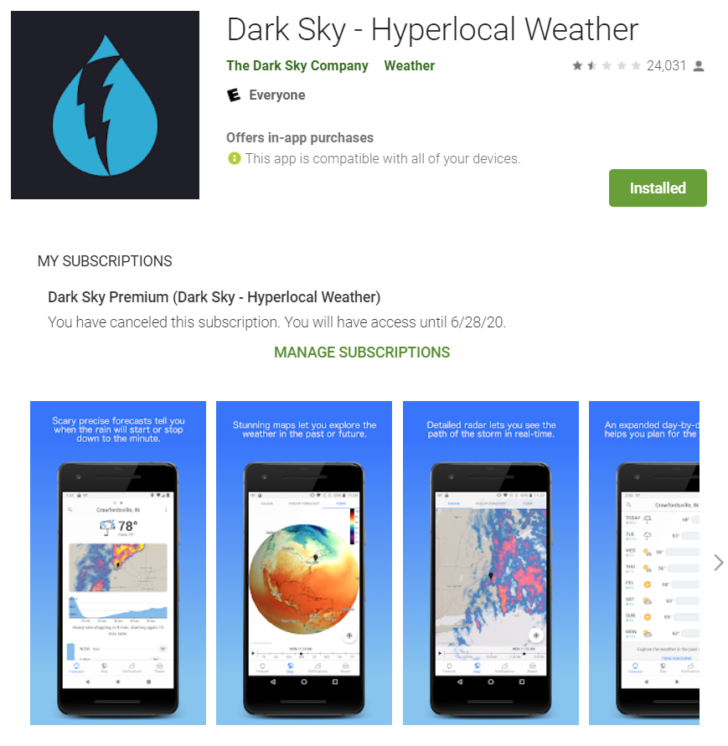 Anyone who has used Dark Sky is unlikely to be fooled, but for the less informed among us, the intent of the developer here is obvious: anyone searching for "Dark Sky" on the Play Store is going to find this deceptive listing. If your parent hears from their iPhone-owning friends and family members about this amazing little weather app called Dark Sky and go to find it on their Galaxy smartphone, they're pretty unlikely to have any clue this app isn't the real deal. Sure, the logo isn't quite right, but the general aesthetic of the app's maps and the name are going to be enough for a less than inquisitive person to think they've found what they're looking for. At that point, the ruse has succeeded.

Once you install the app—which against my better judgment, I did—you'll find that, unsurprisingly, there are ads! And, you will be so shocked to learn, there is an option to remove them... for $6.50. And people are actually paying for this.

The developer of the app seems to be replying in good faith to reviewers, and does emphasize when accused of deceiving users that this app is not officially sanctioned or in any way connected to the official Dark Sky app. The app itself also doesn't seem sketchy in any clear way, and aside from being pretty ugly and clunkily designed, appears harmless. But that's all a pretty thin line of defense to what, in practice, is an obvious intent to mislead. We suspect that the developer will be forced to rename the app, as there's no way Apple will allow the Dark Sky brand to be in such a plainly unauthorized fashion.

Another key factor here that unsuspecting users won't understand is the developer's data source: the sham app says it's using Dark Sky's API for weather data, but this too will shut down, at the end of 2021. Once that occurs, this developer's app will become useless, meaning the $6.50 people spent for a lifelong ad-free weather experience has an undisclosed and very concrete expiration date. So, consider this a PSA for those folks you might know who have a hard time recognizing a knockoff like this, as there clearly remains a decent level of interest in the service since its departure from Android. And given the Android app will fully shut down on July 1st for existing users, the fake's ranking in Play Store search results is only likely to increase.

Funnily enough, there's one area where the phony Dark Sky does beat the original: it has a legitimately decent rating.

The fake Dark Sky's rating as of May 26, 2020—it's surprisingly decent

We reached out to Google for further comment on this story, and will update if we hear back.