Google's Play Store has a few different negative associations, even among Android users, depending on who you talk to. Some developers find they don't get enough support from the company when they run into issues, and less savvy customers have to wade through piles of low-effort and low-quality app clones loaded with ads at best, and malware at worst. But pretty much everyone can agree that the Play Store app itself could be better. While the experience varies, switching between sections, updating apps, and even just scrolling can be a janky, stuttery experience, even on the fastest smartphones.

The overall Play Store performance experience is different based on your account and hardware, but here's a particularly egregious example of performance problems from Android Police's Artem Russakovski and his Pixel 4 XL:

Play Store jank while updating can even interfere with the home navigation gesture — not a great experience.

There are plenty of possible explanations for performance problems in the Play Store. After all, the app is doing a lot of things pretty much all the time: Populating and sorting massive lists, pulling down graphics and other content for each, and downloading updates. That's a lot for an app to handle all at once. But even if you're doing just one or two of these things at a time — like scrolling through lists or simply moving to a different section of the app in the slide-out navigation menu, when it's seemingly doing nothing — it still stutters.

Even a super-smooth 120Hz phone with the latest, fastest Snapdragon 865 will see more frame drops, freezes, and jank in the Play Store than in most other apps. Humorously, our friends at XDA Developers even include Play Store scrolling performance as part of their reviews — the Play Store's anecdotal performance so consistently poor, it's a standard the site's more technically minded readers can easily recognize as a baseline for device comparison. 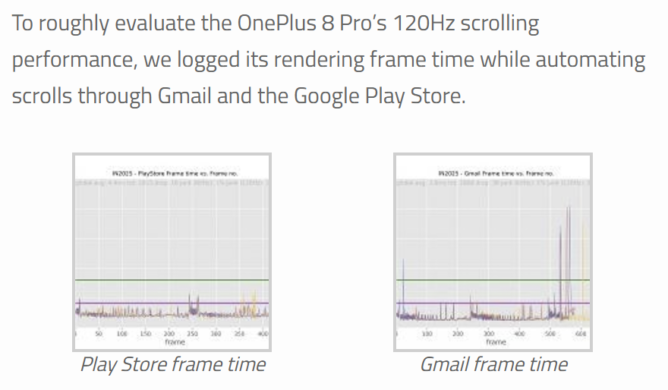 Screenshot from XDA Developers's review of the OnePlus 8 Pro (which handles the Play Store pretty well).

While the severity of Play Store jank varies anecdotally, it does seem to be a common problem. For some, it's a long-standing issue, but others are seeing performance worsen more recently. I personally can't remember a time that I didn't experience dropped frames, stutters, and at least minor system UI freezes from the app, dating back across dozens of devices to at least the Jelly Bean/ICS era. Even if the stutters and lag are usually manageable, the Play Store is rarely a fluid experience.

Over the last month, we've reached out to Google several times for more information about precisely how or why the Play Store app suffers these sorts of performance problems. While we're told it's being looked into, detailed information wasn't forthcoming.