We knew that the Android 10 update for the OnePlus 5 and 5T was just around the corner as the company has been conducting beta trials over the past month. The third Android 10 build came out last week with a long list of fixes and improvements, and now it looks like that was the final beta. A few users took to online forums to report that the two 2017 flagships have started receiving their stable Android 10 OxygenOS builds, though only in small numbers.

The first user reports for the update are coming out of India, where a handful of OnePlus 5T owners got stable build before anyone else. The new changelog includes the usual lines about Android 10 improvements like new gestures and improved control over location access. The OnePlus 5 doesn't get navigation gestures, presumably due to its form factor and capacitive navigation keys (yeah, they were a thing back then). OnePlus has also made changes specific to OxygenOS. For example, Game Space has been upgraded to match more recent OnePlus phones already running Android 10. 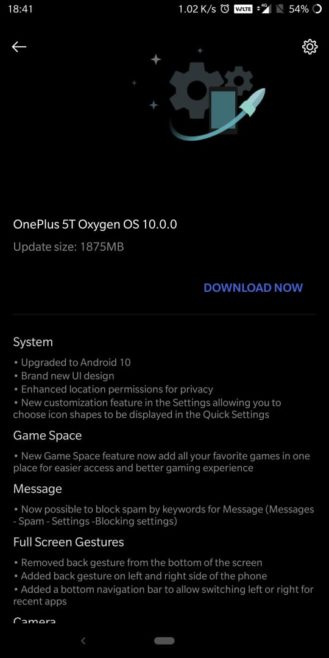 The OxygenOS 10.0 update for the 5T weighs in at under 1.9GB. You should be aware that Android 10 marks the end of major Android version updates for the three-year-old 5 and 5T, which came preinstalled with Nougat. OnePlus hasn’t so far confirmed the update’s availability through its official channels. Chances are OnePlus is only rolling it out to a small number of users to monitor for issues. After getting the third beta for the OnePlus 5/5T, users reported several issues.

If the update hasn't rolled out to you yet, you can grab the download manually and flash it on your phone. The zip files for each model are below:

YouTube Music lets you pre-save some albums before they're released