Earlier this month, both Google and Apple rolled out universal APIs to introduce a Bluetooth-based exposure notification system to help governments perform contact tracing. But this effort of two companies working together for the public good wouldn't be any use without apps utilizing the new APIs. SwissCovid, the first large-scale app to take advantage of the new capabilities, is beginning a pilot program in Switzerland.

The app uses your phone's Bluetooth signal to record and exchange unique identifiers with those around you. These anonymous keys are are kept on-device unless a person tests positive for COVID-19, in which case their doctor will prescribe them a code that can be used to trigger the sharing of the keys from their phone that match up to the days when they were contagious. If the patient opts to do so, the sequences are then shared with a server managed by the Swiss government. For those who have had extended or close exposure with the infected person, a notification will be sent to their phones informing them of the exposure time and providing instructions for what to do next. 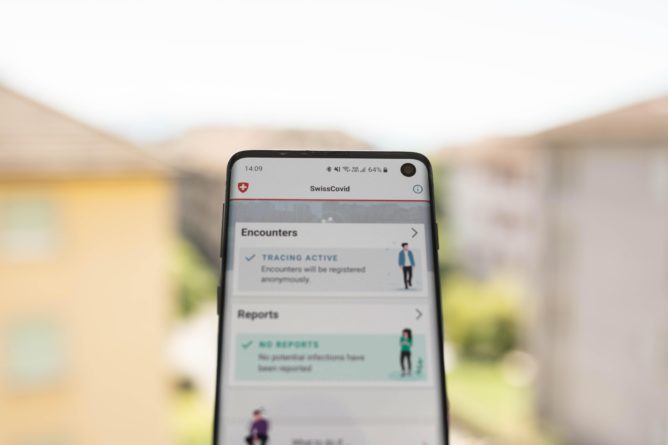 "This gives a great responsibility to the Swiss testers, as many other countries intend to adopt the same protocol later on," says Alfredo Sanchez, a project manager for SwissCovid. According to Google and Apple, 22 nations across five continents are planning on building their own similar apps. Oddly enough, it was the Dakotas that beat other U.S. states to the finish line, rolling out their Care19 app last month. It performs contact tracing in North and South Dakota, but has limited functionality in other areas.

Currently, only select Swiss groups such as the Army, certain hospitals, and regional administrations are invited to register for the pilot program. The testing period will last several weeks, but during this time the app will be using real data, so this could genuinely help save lives even before it reaches the masses. The goal is to make the app available to the general public sometime in June.