The streaming service landscape is quickly becoming convoluted with every TV network, production company, and entrepreneur launching their own exclusive platforms. That's where ScreenHits TV wants to come in. The company will soon launch a service in the US and the UK that lets you aggregate Netflix, Disney+, Amazon Prime, HBO Go, BBC iPlayer, and more into one single interface and subscription.

While the service wants to be live by the end of the month already, there are still some unknowns. The ScreenHits TV website currently only lets you sign up to get a notification when service goes live. If you do that before May 30, you'll get an initial free annual subscription for a streaming service of your choice.

The sign-up page further promises that you can save up to 25% on streaming platforms when you sign up via ScreenHits, and that you can get access to "live premium TV channels and 1000s of shows and films with plans starting as low as $1.99/month." That might mean that you can use ScreenHits to sign up for streaming services directly, though it's unclear how high prices rise when you want to access all of the available platforms. 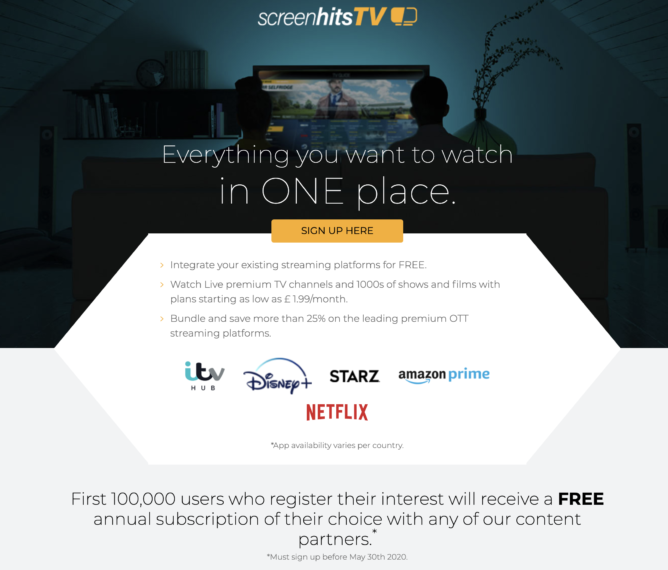 Hollywood Reporter spoke with the company and writes that you can also integrate existing subscriptions with ScreenHits. Further, there will be apps for Samsung TVs, Amazon Fire Sticks, Apple devices, Chrome, Android, and for desktops, but it's unclear if Chromecast is supported.

While all of this might sound sketchy to some degree, ScreenHits isn't a brand-new enterprise. The company is more than eight years old and previously had a streaming service of its own, as reported by Euronews. It was focused on unproven TV shows and pilots and offered some form of a business-to-business service for distributors looking for new content. That might be how the company built relationships with streaming services, which is probably essential for launching its upcoming aggregation service.

It's certainly a great idea to combine all of the streaming services out there, even if it isn't exactly original. Apple TV, Android TV, and some streaming boxes or sticks already offer a common search interface, so let's hope that the integration is deeper and doesn't just dump you into the respective app when you've found something to watch.