When the OnePlus One launched in 2014, it was commonplace in the first months of the phone's availability for second hand models to be sold for over MSRP online. That was due to the phone's notorious (and widely disliked) invite system, which artificially created scarcity in the market to manage OnePlus's supply chain capacity against the demand of consumers for its smartphone. Now, the same has happened to its brand-new phone, the OnePlus 8 Pro.

The 8 Pro launched at $900 in the US, but good luck finding one: the company has been sold out online for weeks, and new stock has been agonizingly slow to appear. That's led to the 8 Pro selling for hundreds of dollars above its MSRP on platforms like Swappa and eBay, with the former saying that average sales prices are now in excess of $1100—more than $200 above the phone's list price. We spotted one 256GB model on eBay with a buy it now price of a staggering $1300. 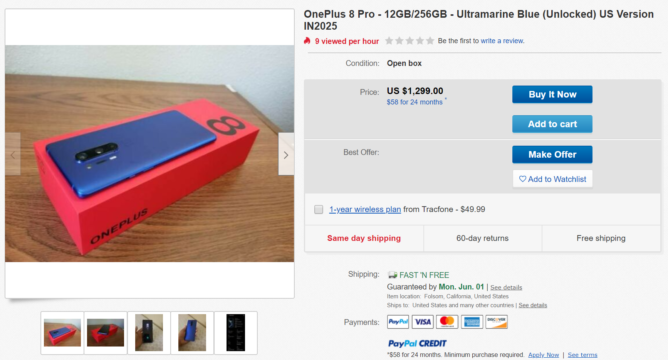 When contacted ahead of publication of this story, OnePlus declined to comment on its current supply chain situation as it related to OnePlus 8 Pro stock in the US. What's interesting is that this problem definitely seems to be impacting America more than other regions, as the supply of international gray market units on eBay seems steady: one retailer is selling the IN2020 international unlocked version of the phone for under $1000. That's a fair bit different from the US SKU (IN2025) in terms of 4G and 5G band compatibility, though, and may not work at all on carriers like Verizon. Meanwhile, in India, OnePlus' website shows it will be shipping the next batch of 8 Pros in three days.

Lest you think this person on eBay is some kind of bold speculator, let Swappa disabuse you of that notion: they're absolutely selling for these prices. Above, we can see OnePlus 8 Pros in various configurations that sold for $100, $125, $250, $319, and $135 above MSRP, individually. This has resulted in a rather hilarious disparity with the Galaxy S20 Ultra, which is seeing its used prices absolutely crater.

This means a $1400 Galaxy S20 Ultra is worth, on average, around $100 less than a OnePlus 8 Pro. This despite the fact that the actual MSRP disparity between the two is $500. The S20 Ultra has swung $600 into the red, while the OnePlus 8 Pro has gone into the black by a hundred dollars or more. What a time to be alive. (Worth noting, OnePlus phones historically hold their value quite well, as the brand rarely offers discounts.)

While it's lamentable that OnePlus has found itself in this situation—undoubtedly related to supply chain tightness caused by the coronavirus pandemic—it sure is interesting to watch something like this unfold. If you have a OnePlus 8 Pro and are OK going back to your old phone (or you've just decided you don't want it anymore), you could stand to make a bit of a profit on it. That's a pretty unusual situation to find yourself in when it comes to consumer electronics.