Today, Arm has revealed a whole new lineup of chip component designs that we can look forward to landing in upcoming SoCs from companies like Qualcomm, MediaTek, Samsung, and even Google itself — if prior leaks are true. This new generation of designs includes the Cortex-A78 CPU, Mali-G78 and G68 GPU, Ethos-N78 NPU, and a new Cortex-X1 which the company bills as "the most powerful Cortex CPU" and the result of a whole new custom CPU program it's offering.

Arm claims the A78 is the most efficient high end/premium Cortex-A series CPU it's ever designed, with up to 20% better sustained performance at the same thermal envelope (i.e., TDP) compared to the A77. But, the company also told us that if chipset manufacturers aim to hit the same performance levels as last year, it will consume half the power. We don't know what sort of clock speeds the A78 will land in, though that 20% gain was comparing an A78 at 3GHz compared to an A77 at 2.6GHz, but it sounds like we can look forward to some sizeable power consumption (and, therefore, battery life) improvements with the next generation of chipsets that use it. 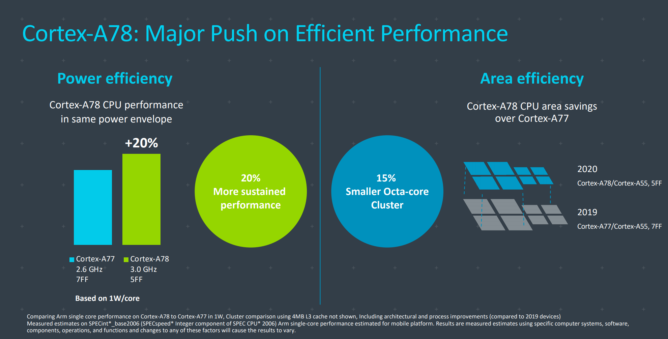 The A78 is also smaller, taking up 15% less die space in an 8-core configuration when used in a 4x A78 and 4x A55 configuration. That can mean smaller (and potentially cheaper) chipsets, or more space for bigger GPUs, DSPs, NPUs, or other custom silicon on-die. (Note, no new "high-efficiency" cores accompany this announcement, so we'll probably still see the A78 paired with A55 cores in big/LITTLE configurations.)

Some of you might remember those rumors that Google was planning on building its own SoC for smartphones, and that it was rumored to include two A78 cores. Well, now those cores are official, and we're one step closer to them manifesting in some Google-designed silicon. 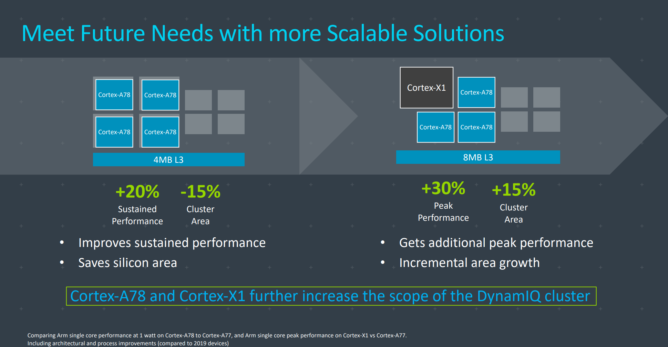 Accompanying the A78 is a whole new custom line of "performance-first" Cortex-X CPU cores, which Arm is offering to partners that want to make heavier modifications to Arm's cores — that sounds like something Qualcomm would be very interested in. The first in the lineup is the new Cortex-X1, which Arm claims will offer up to 30% higher peak performance compared to the A77, and which might end up combined with A78 cores for an even more heterogeneous big.LITTLE configuration.

Arm tells us that the X1 core is the result of a "specific partnership" with one or more companies, and based on the particulars of our briefing, I'd put my money on Qualcomm.

Arm's Mali-G78 GPU is still based on Valhall architecture (no signs of the Borr architecture that Google is rumored to be using for its upcoming chip), but it brings the expected performance gains we expect from a new design. Arm claims up to 25% better performance in specific workloads compared to the G77, with support for up to 24 core designs. "Real-life" game performance improvements range up to 17% increases, and GPU-based machine learning tasks are 15% faster on average (in benchmarks). Overall power consumption is also lower than the previous Mali-G77

A new "sub-premium tier" GPU was also revealed: The Mali-G68. We're told it inherits all the features the bigger/better G78 has, with a few noteworthy tweaks. It only supports up to 6-core designs, but it uses less energy and takes up less space on-die.

Lastly, we have the Ethos-N78, which Arm claims offers up to 2x the peak performance compared to the N77 for machine learning workloads, while also eking out some modest efficiency gains. For chipset licensees that need it, the N78 will be offered in over 90 different configurations for specialized workflows. That means if a company like Samsung plans to implement some new feature that depends heavily on machine learning performance (like, say, massively improved Bixby Vision on-device object recognition), it can choose a tweaked version that performs best for that use case.

For a bit of context (if it wasn't clear), consumers won't ever directly see the stuff that Arm is announcing today. These aren't products you'll pick up at Amazon, and Arm doesn't make the hardware that ends up in your phone itself. The pipeline works like this: Arm reveals its new designs, then chip manufacturers like Qualcomm and Samsung take them — sometimes tweaking them to fit their own particular use cases — and in 2-12 months we get yet another announcement for Qualcomm's Snapdragon XYZ or MediaTek's Helio 1,000,000 which use some of these components. Add in 2-12 more months, and it ends up in a new phone you can go out and buy.

This relatively early announcement sets the stage for you to keep an eye out for the Cortex-A78 and X1 in future super-fast flagship chipsets, as well as other upcoming custom Cortex-X series cores. And now that the Cortex-A78 has been formally revealed, it sets the clock ticking for that chipset Google is rumored to be building, which is alleged to use it.