It's been a while since Sony introduced us to its 5G-capable Xperia 1 II — maybe the past 3 months have just been a huge mic check one, two for the company. However, that phone has come back into the spotlight at B&H Photo where the retailer is accepting pre-orders and displaying quite the dear price for it.

As a refresher, the 1 II has a Qualcomm Snapdragon 865 — 5G development on this chipset may have driven up costs particularly high this year — Sony's signature 21:9 4K HDR display (it's an OLED unit at 3860 x 1644), and a headphone jack with hi-fi audio. Tie those things together with solid bit players like 8GB of RAM, 256GB of storage (expandable via microSD), a 4,000mAh battery with USB Power Delivery compliance, IP65 and IP68 ratings, and three decently-sized rear cameras with Zeiss optics, and it appears that the costs really have added up here. 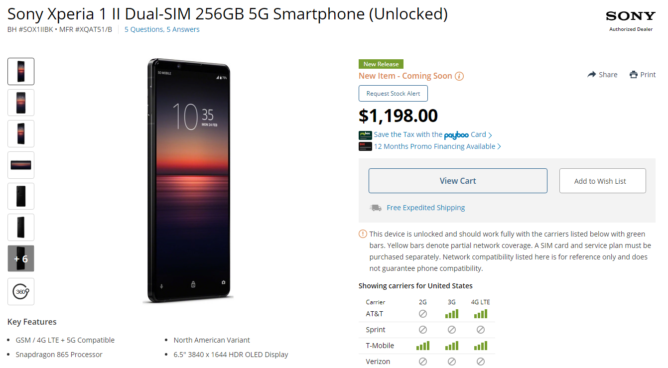 Specifically, B&H is pricing the newest top-end Xperia phone, unlocked for use with GSM networks, at $1,198. It's about what we expected as Sony had teased a €1,200 price tag for Europe. Still, in this time of economic uncertainty, this has become an especially large ask of consumers who would just like to be able to enjoy big visuals and big sound from watching movies or TV or their phones.

No word on a stock date just yet, but you can sign up to get notified via B&H or Sony.

B&H has taken off the price for the Xperia 1 II as pre-orders continue on.

If you're a follower of Betteridge's Law, you wouldn't be surprised to hear that we don't believe a major adjustment is expected at this point, though. The original Xperia 1 came out at an MSRP of $950. Pair that with an additional cost load in Qualcomm's Snapdragon 865 chipset and it would be a doozy.

We'll keep watch on this situation.