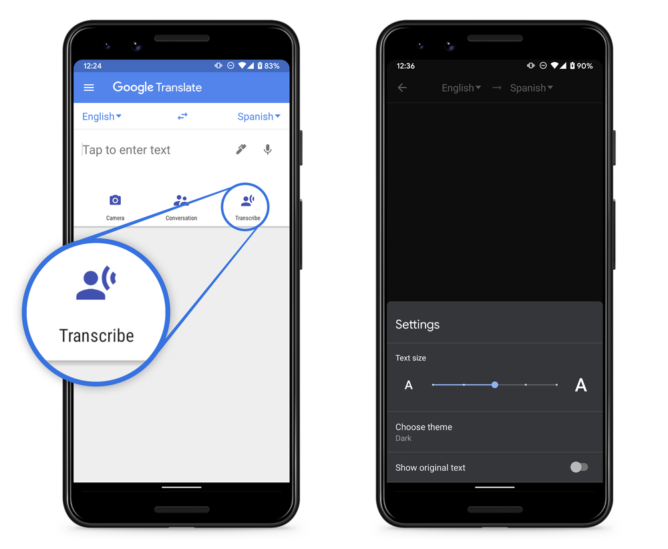 None of our devices in-house have the new version of the app just yet — Google says it will be rolling out over the next few days, and we'll let you know when we have an APK for you — but based on the images provided, the visual tweaks are slight. There's a new icon for conversation translations and a new "Transcribe" icon that takes you to the new feature. The old "Handwriting" and "Voice" buttons appear to have gone the way of the dodo.  When viewing transcriptions, new options for text size and theme are also available, and you can tap the microphone button (visible in the GIF below), to pause and resume transcription.

The functionality builds on the technology used by Google's snazzy new Recorder app, which debuted with the Pixel 4. Of course, instead of simply transcribing what it hears, this new feature takes the extra step to translate it as well. And it's almost assuredly different from the slower, existing "Voice" translation option that the app has had for some time.

As it said earlier in the year, when it first showed off the feature, Google tells The Verge that real-time translation transcription will require an active internet connection — at least, for the time being. It's also Android-only for now, though the company plans to bring it to iOS someday.

Live transcription has been rolling out to the Translate app over the past couple of months, and now the app has added one more language to its roster of supported ones for the feature: Italian. That brings the total up to nine.

You can choose Italian in the app's Transcribe section, but keep in mind the feature doesn't support two-way translation, so you need to pick which language you're speaking in and which one you'd like to be output on the screen.