Google Play Movies has generally been late to the party when it comes to adopting newer video and audio standards. Its massive content catalog lacked support for UHD and HDR-enabled content for the longest time, and HDR10+ support was eventually announced a few months back. As it attempts to catch up with its rivals quickly, Google is now adding Dolby’s proprietary dynamic Vision standard for HDR content, but only for a pair of movies.

The folks at FlatpanelsHD spotted two titles listed with the Dolby Vision badge: Joker, starring Joaquin Phoenix, and Paul Feig’s A Simple Favor — and we've been able to verify this. No other movie outside these two seems to have gotten the capability on Play Movies yet. In comparison, Apple’s iTunes Store has a much bigger collection of over 600 Dolby Vision titles. The chances are that Google is testing the waters ahead of an official announcement, and the movie count may grow as more studios get on board. 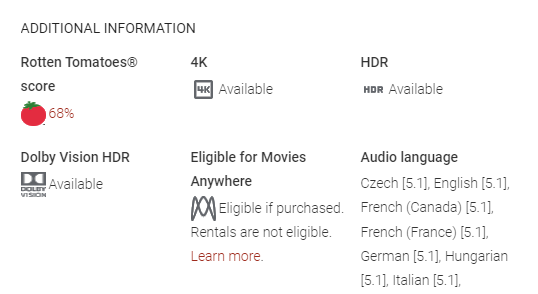 Those outside the US may not see Dolby Vision content just yet as regional availability could take longer. What’s also worth noting here is that the prices for the two titles don’t seem to have gone up at all, at least not at this time. Dolby Vision wasn't mentioned when the HDR10+ addition was announced for Play Movies in January, but our friends at XDA Developers did spot Dolby’s HDR standard in a code string about a month before, indicating its upcoming release.