Samsung has just announced a "tactical" version of its Galaxy S20, optimized for use in "any tactical environment." When it comes to specs, it's mostly the same Galaxy S20 you already know (and love?), with a few oh-so-tactical twists, like DualDAR NSA-level encryption, "tactical" radio support, and a super sneaky "stealth mode" that turns off all RF broadcasting and disables LTE — a very tactical airplane mode. The Galaxy S20 Tactical Edition (that's actually its name) is a phone built for "warfighters," according to Samsung — if the chunky plastic desert-tone super tactical case didn't make that clear. The case can be attached to your chest (as one does), and flipped out tactically when needed, with auto-touch sensitivity for tactical gloves.

It supports expensive-sounding mission application acronyms like ATAK, APASS, KILSWITCH, MANSQUASH, BATDOK, and PREPDUMP. (We made up two of those.) It even has a "Tactical Application Quick Launch" via a button press for those tactically urgent app moments. 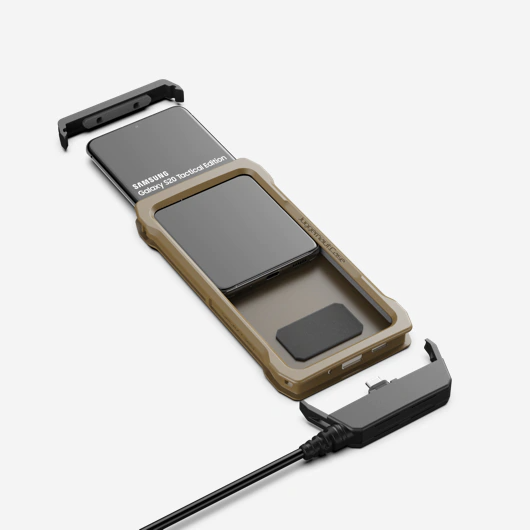 I bet you that is one expensive case.

In short, it's out of the box approved by the DoD for super-expensive (dare we say, "tactical") military use, and we're sure it has a boondoggle-appropriate price to match, though none was included in this most tactical of announcements. If you'd like to see more, you can through just below for all the other tactical details.

AT&T now says it won't get rid of 5Ge logo in status bar, doubles down on lying to customers

You saw it coming, but the Galaxy Note20's launch will probably be an online-only event