Chromebooks have gone through a rapid evolution over the past two years or so. High-end models like the Galaxy Chromebook, Acer Chromebook Spin 13, and Lenovo Yoga Chromebook C630 are bumping up against Windows ultrabooks in both hardware and price. At the same time, Chrome OS has expanded in functionality with features like Linux app support, better native printing, and improvements to tablet mode.

Asus revealed the Chromebook Flip C436 earlier this year, and while it's a great laptop (if you like Chrome OS) with fantastic performance, the incredibly high price makes it a tough recommendation.

The Asus Chromebook C434 was a radical design departure from the Flip C302 it replaced, but the jump from the C434 to this new C436 model isn't quite as much of a leap. It still borrows heavily from the design of Asus' Zenbook laptops, with a light aluminum body and minimal screen bezels. True to the 'Flip' name, you can flip the screen around and use the Chromebook as a giant tablet. 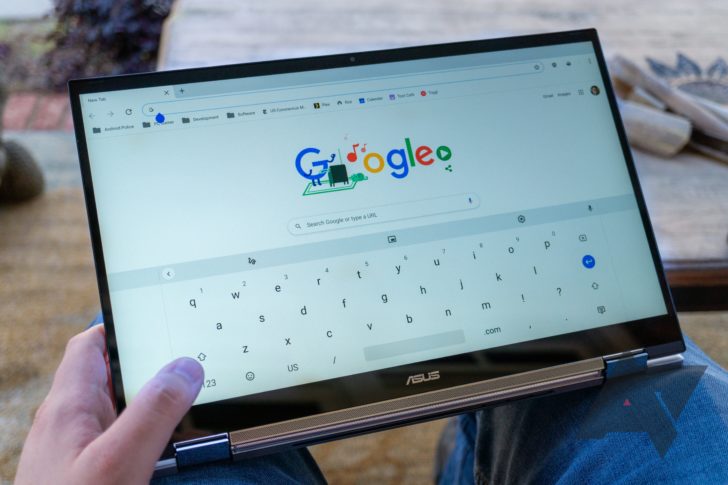 Although this is a minor design iteration over the C434, there are a few important changes. First, Asus has removed the single USB Type-A port, only leaving two USB Type-C connectors. There's still a microSD card slot, though, as well as a headphone jack — take that, Galaxy S20. This new model is also thinner (13.76mm, compared to the C434's 15.7mm) and has front-facing speakers. 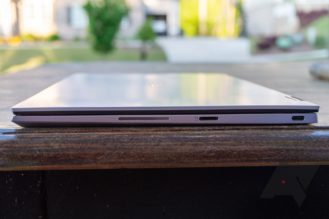 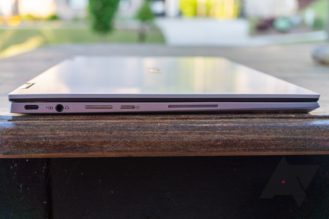 There are two color options available for the C436: Silver, and 'Aerogel White.' Asus sent me the latter option, but only the top is white — the bottom half of the laptop has the default silver color. 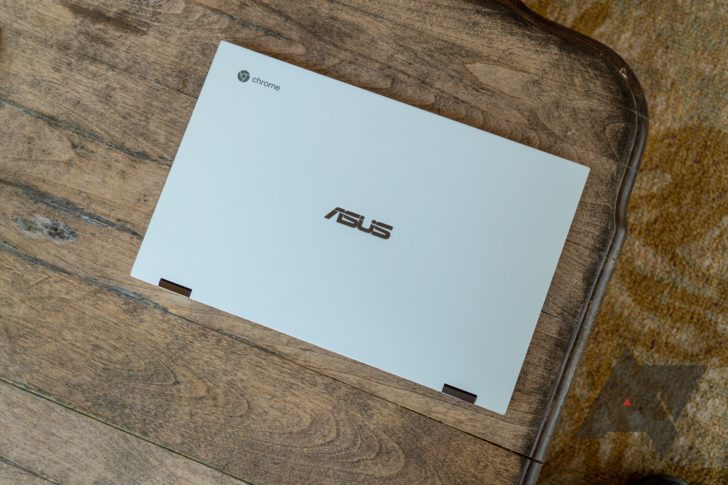 The Asus Chromebook Flip C436 is one of the first Chrome OS devices with Intel's 10th generation Core mobile processors. There are models available with a Core i3-10110U, Core i5-10210U, and Core i7-10510U. However, despite the branding, these Comet Lake-U chips are nearly identical to the 8th-generation Core CPUs that you'll find in many other Chromebooks.

The keyboard on the Chromebook Flip C436 is acceptable. I'm not personally a fan of Asus' keyboards, as they feel a bit mushier than the keyboard on my Dell XPS 13, but I don't think most people would complain about it. On the bright side, there's still a decent amount of key travel, and the layout doesn't feel cramped. 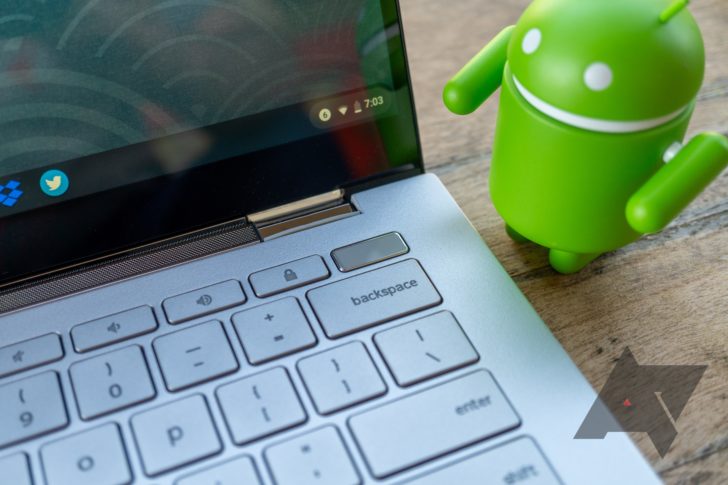 There's a fingerprint sensor at the top-right corner of the keyboard, which can be used for logging into Chrome OS. It's definitely a nice feature, though you still need to enter your full password on first boot, just like with Android phones. I'm happy to see Asus has taken notes from Apple and gave the C436 a massive touchpad. It feels great to use, and there's plenty of room for gestures.

Chrome OS can run well on $200 laptops, so it's perhaps not surprising that it absolutely flies on the Chromebook Flip C436. The laptop goes from a cold boot to the login screen in under five seconds, and I never once noticed a slowdown during my usual workload of a dozen Chrome tabs and some Android apps.

However, I've also used plenty of Chromebooks in the $400-500 range, and all of them offered performance similar to the C436. If you were hoping Intel's shiny new 10th-generation Core CPUs would take Chrome OS to the next level, I'm sorry to disappoint. As I mentioned earlier, the Comet Lake-U processors used in the C436 are just slightly refined versions of the 14nm chips Intel has been using in ultrabooks for years. The Core i3 in the base model is still a 2-core/4-thread CPU.

If you're interested in benchmarks, the Core i5 Chromebook Flip C436 scored a 105 on the web-based Speedometer 2.0 test. On Geekbench 4, it received a multi-core rating of 3137 and a single-core score of 952 (full results here). 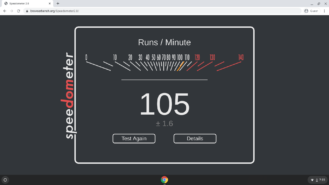 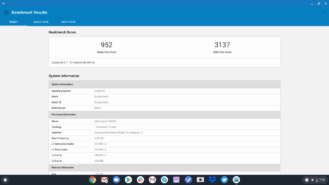 Battery life on the C436 is acceptable, but not amazing. Asus claims up to 12 hours per charge, while my experience was closer to 6-7 hours, with my usual mix of 10+ Chrome tabs and one or two Android apps running at the same time. However, that's still much better than the Samsung Galaxy Chromebook's four-hour battery life, according to The Verge's review. Even though the C436 has the same 10th-gen Intel chips as the Galaxy Chromebook, the C436 only has a 1080p LCD screen — much less battery-hungry than the 4K OLED panel on Samsung's laptop.

If you've used Chrome OS before, you'll feel right at home on the Chromebook Flip C436. The software experience is identical to all other modern Chromebooks, complete with support for the Google Play Store and Linux applications. It even supports GPU acceleration for Linux applications, but even with that advantage, video editing and gaming performance is limited. 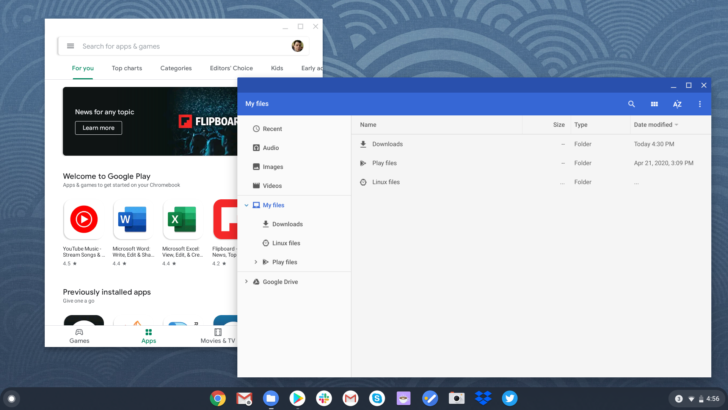 Google says the C436 will receive system updates until June 2028, making it one of the longest-supported Chromebooks to date. I still think a fixed software lifespan on a laptop near $1,000 is ridiculous, but most people probably don't use the same laptop for the better part of a decade.

The only software bug I noticed on this model is that the scaling on Android and Linux apps doesn't seem perfect. The text rendering in Android apps was sometimes blurry, but the behavior is inconsistent. Linux, in general, doesn't have great high-DPI support, so that's less of an issue with Google's software, but it did result in unusually-small buttons or occasional blurry text in applications like GIMP.

Not until it goes on sale. The Asus Chromebook Flip C436 is undoubtedly one of the fastest Chromebooks ever made, but even if you really like Chrome OS, there's just no way to justify the current $800 starting price. The design and overall experience are hardly changed from the previous-gen C436, which has gone for as little as $400 in the past. If you don't care about the 2-in-1 form factor, the Pixelbook Go is $150 cheaper than the Flip C434 and offers similar performance.

Right now, I'm not entirely sure who the target market is for this laptop. Even for die-hard fans of Chrome OS, there's very little benefit to the C436 over any high-end Chromebook released over the past few years, except minor additions like the fingerprint scanner.

This is still the only Chromebook I've ever tried with full support for GPU acceleration in Linux applications, and I don't really edit video or work on machine learning projects, so I thought it would be fun to try out a few Steam games. Spoiler warning: It was not fun.

The first game I tried was Team Fortress 2, a game that was released in 2007 (though it has raised the system requirements a few times since then) and generally works very well on systems with Intel integrated graphics. However, I experienced constant freezes, poor framerates, and the colors were completely inverted. Also, Linux apps on Chrome OS can't lock the mouse, so you can only move your head so far to the left or right before you can't go any further (because the pointer is at the far corner of the screen).

Note: The flashes of color near the end of the clip are from my HDMI capture card, and were not visible on the Chromebook

Next I tried BioShock Infinite, released in 2013. I played through the whole game on my 2013 Mac Mini back in the day, which had far worse integrated graphics than the Intel CPU in this Chromebook, but the game still wasn't playable on Chrome OS. Even on the 'Very Low' graphics preset, it couldn't maintain 30 FPS.

I don't have any reason to believe this is an issue with the Asus Chromebook itself — it certainly has the hardware to play these games. It's up to Google to keep working on the GPU acceleration feature, especially if rumors of official Steam support are going to become a reality.