TikTok is a platform that sparks a lot of controversies and is currently dealing with a US investigation concerned with censorship and security issues. Now, another problem is on the rise for the platform, and it's a prime example of how quickly online communities can grow toxic. In what appears to be some form of war between some Indian YouTubers' fans and popular TikTokers, the app has been caught in the crossfire and is receiving low rating after low rating. It's already down to an average of 2.0 when it sat at about 4.5 stars only a few days ago. 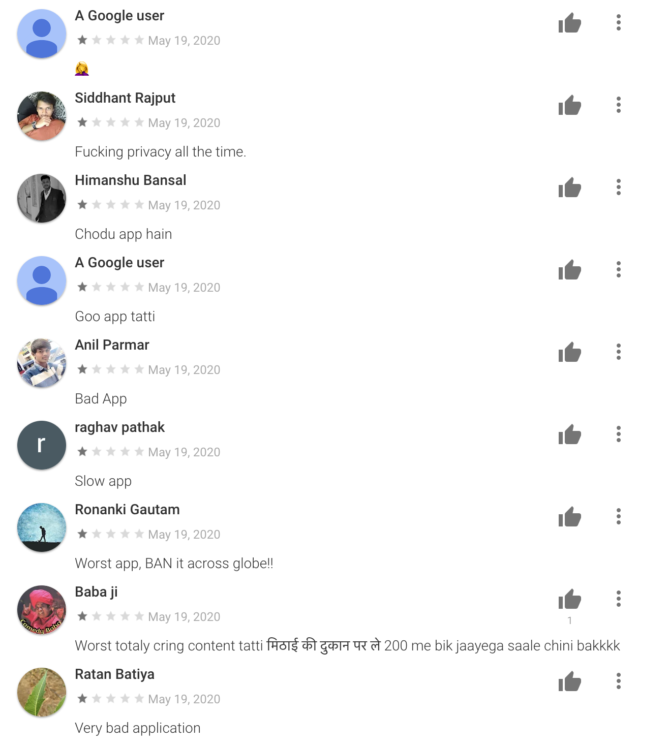 Just a selection of recent reviews, more can be found on the Play Store.

There are probably many ways to tell this story, but India Today summarized the gist of it: The whole situation can be traced back to a quarrel between YouTuber Carry Minati and TikTok influencer Amir Siddiqui. Following attacks by another YouTuber, Siddiqui posted a refute, among other things claiming that YouTubers plagiarize content and daring Minati to roast him, which he indeed did on May 8. That video accumulated millions of views and likes, but was taken down by YouTube on May 14 — supposedly Siddiqui's fans reported it for cyberbullying. That apparently made Minati's 18 million subscribers angry enough to rush to the Play Store and bombard the app with one-star reviews.

Some are even calling for a TikTok ban in India, which wouldn't be unprecedented — the app had been unavailable in April 2019 due to pornography concerns. TikTok generally doesn't have a good standing in India. The community using the app also faces criticism from the government over acts of violence against women and the promotion of such, and seems to be a breeding ground for hate speech in general. There's also controversy around moderators suppressing posts from the "ugly" and the poor.

TikTok's App Store listing hasn't been hit as hard, if at all — it still sits at a comfortable average of 4.8 stars. The app also remains among the top 3 in the Indian Play Store, despite the attacks by YouTube fans.

It's interesting how a local, influencer-induced quarrel can lead to such a dramatic shift in a globally acting app's rating, but since this is an abuse of the rating system, it might only be a matter of time until the situation improves for TikTok. Google Classroom and Zoom were hit by similar groundless one-star ratings following lockdown orders and disgruntled students not wanting to study remotely, though the situation improved after Google removed most of the obviously baseless ratings.

Google finally begins the transition from Hangouts to Google Chat