Google Chrome hasn't implemented the extreme level of tracker/ad blocking that we've seen in other web browsers over the past few years (I'm sure Google's position as an advertising company has nothing to do with that), but it has been taking small steps. Google has proposed new web standards that would make fingerprinting and cross-site tracking much more difficult, and now the company is announcing some browser-level features that aim to improve privacy and security.

"Today we’ve started rolling out new tools and a redesign of Chrome’s privacy and security settings on desktop, to help you control your safety on the web," Google revealed in a blog post. Most of the changes are relatively minor — some settings have been moved around for easier access, you'll now get alerts if Safe Browsing is turned off, and so on — but there are a few substantial additions.

First, Chrome will now display an extensions button in the toolbar at all times, telling you which extensions have access to the page you are currently looking at. "It’s a neat way to tidy up your toolbar," Google said, "and gives you more control over what data extensions can access on sites you visit. With this addition, you’ll still be able to pin your favorite extensions to the toolbar." Google first began experimenting with this change a month ago, and extension developers have voiced complaints that it makes the toolbar action buttons harder to access.

Incognito Mode is also receiving a few updates. Third-party cookies will now be blocked by default in Incognito sessions, but in the event of pages breaking, you can still enable them by clicking the new eye icon in the address bar. Google says the Incognito updates will "gradually roll out, starting on desktop operating systems and on Android."

Google is also introducing support for DNS-over-HTTPS to Chrome, which functions independently of the host operating system's setting, if one exists. DNS servers are responsible for connecting domain names (like google.com or androidpolice.com) to their corresponding server IP addresses, and with DNS-over-HTTPS, requests are encrypted — resulting in a more secure browsing experience. 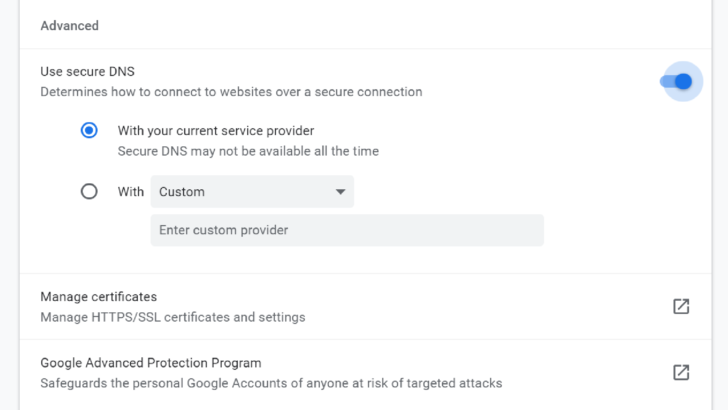 Firefox enabled DNS-over-HTTPS by default earlier this year, using CloudFlare's 1.1.1.1 servers. The move was widely criticized by governments and ISPs, with the United Kingdom's Internet Services Provider's Association (ISPA) nominating Mozilla as an 'Internet Villain' for "bypass[ing] UK filtering obligations and parental controls, undermining internet safety standards in the UK." Mozilla ended up not rolling out DNS-over-HTTPS in the United Kingdom due to complaints from government agencies, but the feature has been fully implemented in the United States and other countries.

Chrome's implementation of DNS-over-HTTPS will likely be much less controversial, as the browser will use your system's DNS server if it supports the upgraded protocol — meaning your existing DNS/internet provider will continue to process (and likely store) domain queries. You can also set a custom server, if you'd like.

Google says these features will start to roll out on desktop platforms "in upcoming weeks."

CBS All Access updated with HDR support on Android TV