Wow, I wasn't expecting Android 10 for the V50 for another 3 months. pic.twitter.com/BvfyZSF8ne

With South Korea traditionally being the first region to receive LG's latest software updates, the changelog for Android 10 was written entirely in Korean. However, after a bit of rough translating, the stable update looks like it includes the December 2019 Android security patch, full gesture navigation, pop-up window support, and changes to how photo and video modes are accessed in the camera.

If you happen to live in South Korea and you own an LG V50, you should be able to grab the stable version of Android 10 right now OTA. Some users on Reddit have reported their V50 devices outside of South Korean have also received Android 10 through the beta program.

We've received word from a tipster that Android 10 stable for the LG V50 is now rolling out to Sprint customers in the US. Several Redditors have confirmed this report, stating that they've already successfully downloaded the software. If you're an LG V50 owner on Sprint, head on over to your settings app to see if the OTA update is waiting for you. There are no reports of additional US carriers rolling out Android 10 stable to the LG V50 at this time. 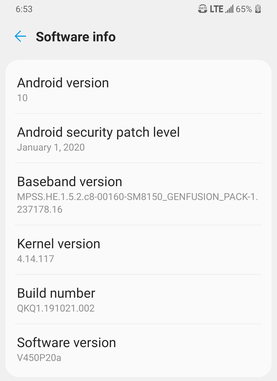 Verizon has posted the changelog for its LG V50 ThinQ 5G's Android 10 update — also known as System Update 7. Redditors have confirmed that they have received the OTA on their phones.

For the record, it's taken 4 months since South Korean phones got Android 10 for V50 owners on Big Red to get their respective update.