There are few thoughts so fundamentally terrifying to the modern-day tech user — things able to shake a man to his core — than the idea of being without power when you need it. As someone who tops off his phone whenever in sight of a USB cord, who carries at least a 20,000mAh battery pack everywhere he travels, I'm always interested in hearing about solutions that provide not just enough on-demand power to keep you going a little longer, but such massively deep reserves that the words “out of charge” need no longer exist in your vocabulary. Enter: the Jackery Explorer 1000 Portable Power Station. 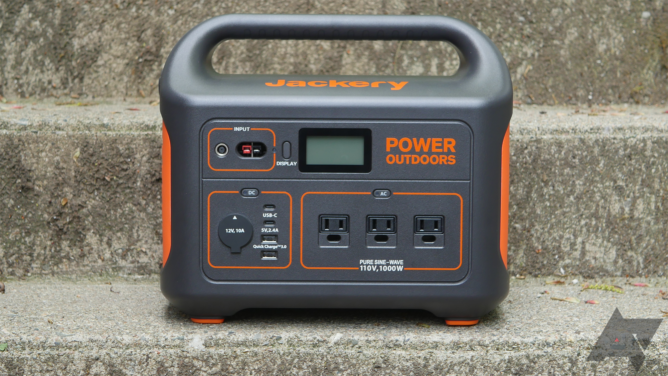 This luggable battery has a textured plastic exterior, rubber feet underneath, and a rigid carry handle. Taking it out of the box, you're immediately struck by its heft: 22lbs is a serious chunk of battery. The handle's comfortable enough (important when you carry around something this heavy), and balance is relatively good. I'm a little concerned how the shell may hold up to serious impact, but it's proved to be more than adequately durable in my usage. 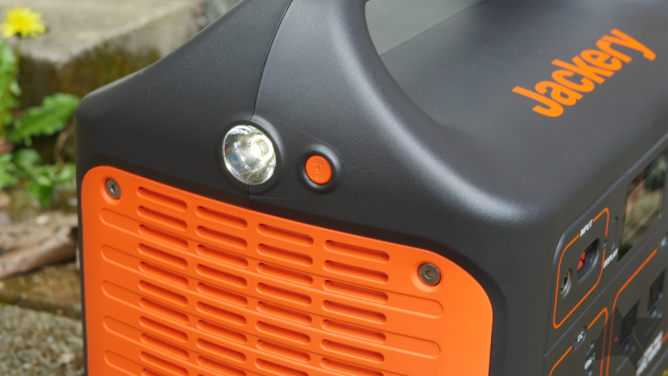 Nearly all of the Explorer 1000's hardware lives on the battery's front face. You've got some big vent grilles on the two sides, and a built-in LED flashlight with SOS support above one of those, but otherwise all your ports and controls are all in one place. 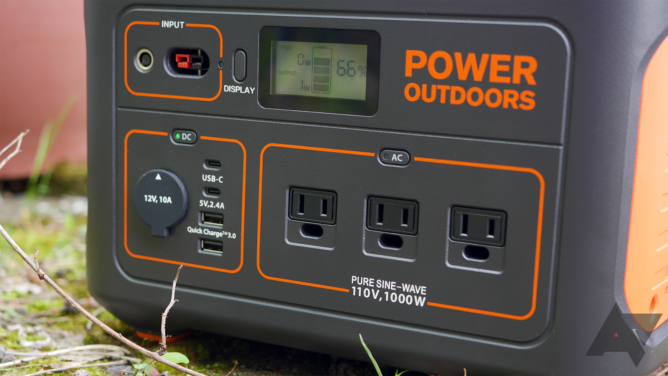 Even with no cables connected, activating output draws a small amount of power.

Those basically fall into four groups. There's the display, which will be on constantly while the battery's in operation, and can be called up with a touch otherwise to check on remaining charge. Below that we've got three AC outlets, sharing a combined 1000W output.

Left of AC are all the DC outputs, including a couple USB-PD, a couple standard-A with Quick Charge 3.0, and a 12V car socket. And finally, above that, we have our power input: a barrel connector shared by the included AC adapter and 12V cable, and a solar-panel input that support MPTT charging. 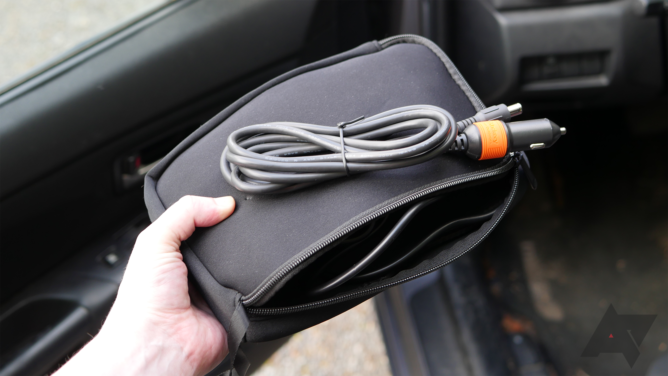 Both the AC adapter and 12V car adapter can be stored in this travel pouch.

Jackery includes a nice little travel pouch for the charging cables, but while that battery is already pushing my comfort limits of size and weight, I can't help but feel that I'd prefer a design that didn't need an external power brick at all, and could just accept AC input directly.

The Explorer 1000 is capable of storing a ridiculous amount of energy: right around 1 kWh. Internally, it's constructed from an array of 18650 lithium rechargeables (the same cells I just showed you powering the Kami Wire-Free), which it uses to generate its various DC and AC output options.

To use any of those, you have to manually select the DC or AC banks. You can use both at once, no problem, but there's a slight load on the battery when either is selected (even if not in use), so the minor inconvenience of having to press a button here saves a lot of charge. 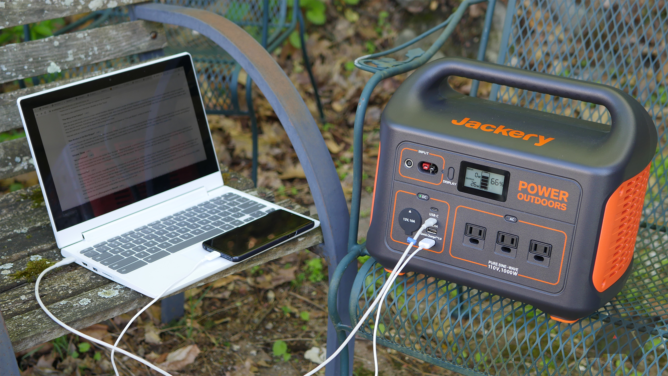 USB-PD is limited to 18W, but can be used simultaneously while charging other devices.

Hit the DC button and you can get started powering your USB devices and accessories. There's no limit on how many you can use at once, but I was a little frustrated with USB-PD output maxing out at 18W per device. That's unfortunate for anyone hoping to pair this battery with something like a laptop. The one saving grace is that you can always just use a higher-output power adapter with one of the unit's AC outlets, but that's far from elegant.

Speaking of AC, this is where the Explorer 1000 really steps up to prove its worth. I've used power inverters before, sure, but nothing with anything close to this kind of output — 1000W continuous operation, supporting surges up to 2000W. While that rules out stuff like many window air conditioners, microwaves, and heating plates, it includes plenty of televisions, computers, stereos, and combinations thereof. 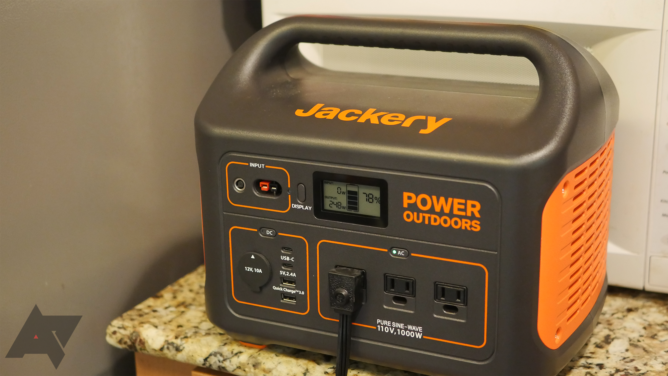 That big gray expanse on the left is a 25.5 cubic foot fridge, operating on battery power.

Jackery mentions several times that you could use the Explorer 1000 to power a portable fridge. Sure, but you can power an actual fridge, too. I hooked my kitchen's 25.5 cu ft. refrigerator up to the battery to test, and saw power consumption ranging from just a few watts at idle to up to 250 watts with the compressor and ice maker going. While things like how often you open the doors are going to affect power demands, I saw the fridge pull around 140 watts an hours on average. That means that in a power outage, the Explorer 1000 could keep my fridge in full operating condition for over six hours. 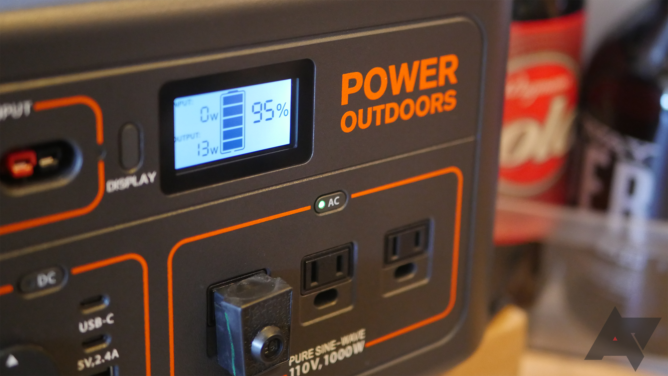 Still on fridge duty (door open) but when the compressor's not running.

While it's clearly not designed to operate as a UPS, the Explorer 1000 is extremely useful not just when trekking outdoors, but also when you're stuck at home during an power outage. A few weeks back the power went out at home while I was working in my office. Not content to let that stop me, I plugged the Jackery into my fiber bridge, router, Ethernet bridge, desktop PC, monitor, and even speakers (why not?) — there may only be three outlets here, but so long as you're keeping total consumption under 1000W, there's no reason you can't attach a power strip. And sure enough, I was back in business, drawing under 200W for all that hardware. 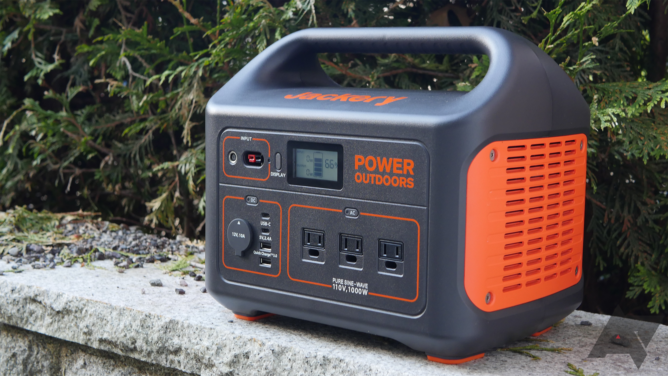 Large side grilles are ready to help out with cooling the Explorer 1000.

During operation, the battery is whisper-quiet ... until it isn't. There's plenty of active cooling on board, but the Jackery's fan seems to be an all-or-nothing affair. You'll be sitting there charging your laptop in silence, and then WOOSH you're in a wind tunnel. The actual volume level isn't a huge problem, but it can be a bit startling with the fan engages all at once — I think I'd prefer to see more granular cooling control.

As an aside, I absolutely love how convenient the Explorer 1000's nice, round 1000W capacity makes working out operational times. If I'm pulling 200W, it doesn't take much effort to see that I should be looking at around 5 hours on a charge. This is slightly complicated by the fact that you don't get 100% efficiency (it's closer to 85%) but this still gives you a nice ballpark estimate — just err well on the side of caution. 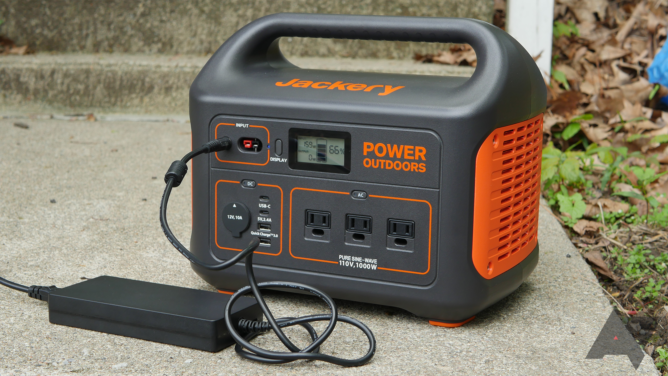 Fittingly for the Explorer 1000, even the AC adapter is a chonk.

Speaking of charging, your fastest option is using the AC power pack, which puts out about 160W and should have the Jackery filled back up in roughly 7 hours. Going with the DC car adapter takes about twice that. I wasn't able to test the Explorer 1000 with a solar panel, but under optimal conditions, charging with two solar panels should take only slightly longer than AC.

Jackery Explorer 1000 Portable Power Station
8.5/10
Yes. The Explorer 1000 is expensive — this is a $1000 battery. It's heavy to lug around. And it's also more energy than you've ever dreamed of carrying in your hand. What that empowers you to do isn't always immediately clear, but you start picking up on the benefits quick: "I guess I don't need to find an extension cord for this power tool, since I can plug it right into the Explorer."

I do wish it had better USB-PD output, and I'd tweak a few things about the design, but I am overall very happy with what Jackery did here. The value proposition seems largely in line with its peers, and this high-capacity battery market has more or less zeroed in on $1/Wh pricing. Maybe the closest competition comes from the Goal Zero Yeti 1000 Lithium, which upgrades to 1500W output, but weighs twice as much and costs $200 more. 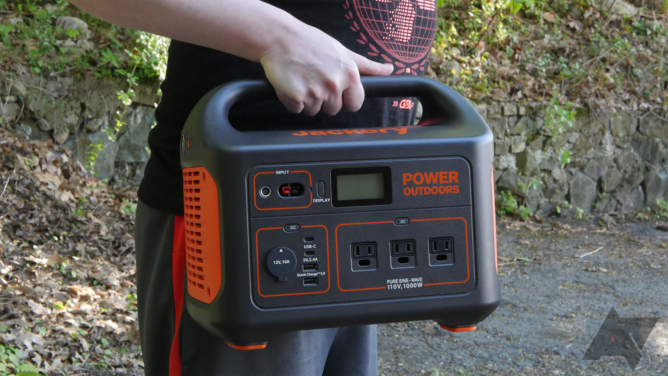 OnePlus could be working on true wireless earbuds