Google will kill Play Music this year, fully replacing it with YouTube Music. To make the transition easier, the company announced a migration tool that's currently rolling out to anyone who uses or has ever used Play Music. It'll transfer all of your data like uploaded songs, playlists, likes, and recommendations from Play Music to YouTube Music.

Before we dive into the process, be warned that it might take a while until library migration is available to you. Since all of your data needs to be copied over, Google is probably fighting with limited server capacities, so it's rolling out the tool in stages based on your location. You should see a popup or toast in Google Play Music when it arrives on your account, and the company will send you an email.

Using the Android (or iOS) app

To get started with the migration, you need to install YouTube Music on your phone. Make sure it's at least version 3.65. If it's not available to you on the Play Store just yet, you can get the latest version from APK Mirror.

If the tool has rolled out to you, you should see a message on the app's homescreen, telling you that Play Music is going away and that you can start the migration. Tap the "Let's go" button and you're taken to a screen showing you in which order your items will be moved over. If you're a Play Music subscriber, your subscription will also be rolled over, and the price will remain the same — even if you're grandfathered in on the $7.99 plan or the family subscription. When you're ready to start, tap "Transfer." A banner will pop up, telling you that the migration is in progress and that you can explore YouTube Music now.

The tool will first import your recommendations so you can start listening to personalized mixes on YouTube Music before the full transfer is finished. You can tap a banner below the top bar to see how far your migration has progressed.

You can start exploring YTM while the migration is in progress.

You'll receive a notification and an email once the transfer is finished, which can take a few minutes or multiple days depending on how many songs you've uploaded. When I made the switch myself, I noticed that a few songs in some former Play Music playlists were still grayed out and unavailable after getting the notification, but that issue fixed itself after a few days.

If you'd rather use your computer to kick off the migration, head to music.youtube.com/transfer. Like the app, this website shows you which data it'll transfer in which order. Click the "Transfer" button to get going. You can then explore the YouTube web app, and a banner will let your return to the transfer overview so you can see your progress — the process is basically the same as in the Android app. 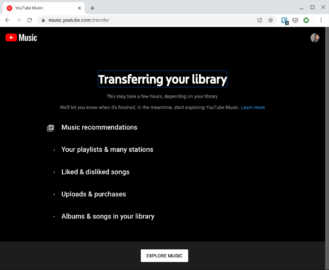 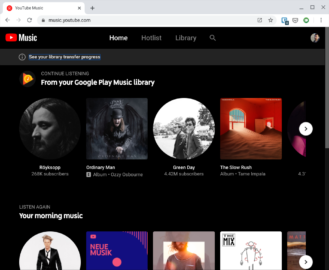 What if I continue using Play Music after the switch?

If you still continue using Play Music after making the initial switch, don't worry: You can sync your libraries as often as you want to by clicking or tapping your profile picture in the top right corner and heading to settings, where you'll find an option to kick off the migration tool again. That can be done both on the web and in the Android app.

Where are my uploads and stations?

YouTube Music organizes some things differently from Play Music. Your uploads sit in a separate section of the app, sealed away from the platform's streaming service aspect. When you browse your library or search results, you'll notice that there are two tabs at the top, one for YT Music and one for uploads. It's self-explanatory enough, but you need to be aware of it if you can't find some of the albums you thought you'd uploaded. We've got a granular comparison of how YouTube Music handles uploads compared to Play Music.

Stations aren't a thing in YouTube Music, so it converts all of your stations to playlists. Their content is identical — the only difference is that you can actually see all the individual songs within a playlist, which you couldn't with stations, at least without playing them. YouTube Music also has curated and AI-generated playlists that replace things like Play Music's New Release Radio or the Feeling Lucky station.

I'm missing some songs. What's up with that?

All of your uploads and purchases will be transferred, but since YouTube Music has different licensing deals than Play Music, you might not find the same selection of songs as available on Play Music's streaming service. Google says these cases should be few and far between, and some songs that have disappeared from your Play Music library due to rights or licensing might even reappear in YouTube Music eventually.

Can I make the switch if I'm a free user?

Yes. YouTube Music lets you play your uploaded songs in the background, and you can download them. Casting capability is limited, though — as far as I can tell, you can't ask an Assistant-equipped speaker to play uploaded songs, so you need to cast your music via the Android app.

In contrast to Play Music, you can also access the streaming service of the platform for free, but you'll have to endure ads, and you need to leave your phone's screen turned on and the YouTube Music app in the foreground while you listen. The background limitation doesn't apply to the web app, though.

I already use YouTube Music. Will my library be overwritten?

That's the situation I found myself in, and as far as I can tell, no data got lost when I made the switch. Instead, your libraries will be combined intelligently. I uploaded a few albums to YouTube Music already in my Play Music library prior to the migration and there were no duplicates. A few identically titled playlists across the two services were retained as separate lists, instead.

Some people use Play Music to listen to podcasts, but YouTube Music doesn't support that format. You can instead export your episode progress and subscriptions to Google Podcasts. Once the migration tool has rolled out to you, you can head to podcasts.google.com/transfer to kick off the separate transfer. 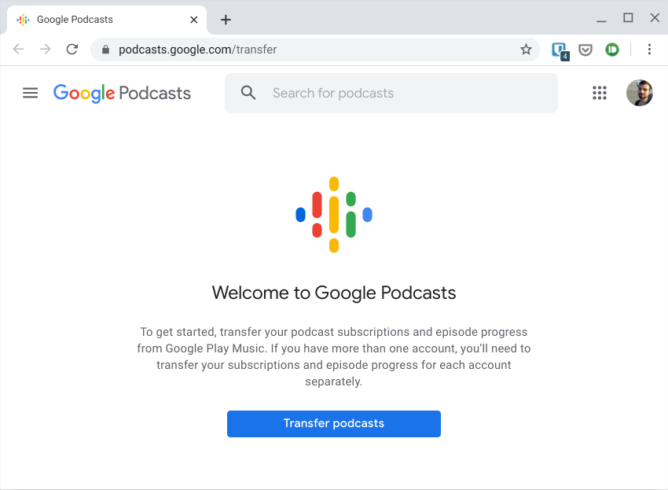 The podcast player is available on your Android phone as part of the Google app (just search for a podcast you're interested in), but you can also get a dedicated launcher icon from the Play Store if you prefer. There's also a web interface.

While some people might wish to have more granular control over which songs and playlists to transfer, the tool is as straightforward and easy to use as it can get, which was Google's goal. The YouTube Music team knows that there are still some significant differences between the two services, so it wanted to make the transition as smooth and painless as possible.

If you're interested in how such a switch pans out for someone who has used Play Music ever since it became available, check out my editorial on my experience with YouTube Music (written before the migration tool rolled out).

How to change the Samsung Keyboard to Gboard