Do you remember how many smartphones you've owned? And do you remember the first phone you've ever used with a subscription service like Netflix, Amazon Prime Video, Spotify, YouTube Premium, or Google Play Music? While the companies behind these services probably save that information to some server, Google is the only one among them that will rub that knowledge into your face. As long-time users probably know, Play Music comes with a hard 10-device limit that doesn't automatically kick off older devices, instead only allowing four manual deauthorizations every year. If you frequently switch devices (or merely factory reset them), you might have already ended up running into the limit at some point in the past, locking you out of the service you pay good money for.

That's what almost happened to our own Ryan Whitwam back in 2014. Being someone who switches between tons of phones for a living, he ran into the deactivation limit and feared he couldn't use the service once he would test another handset or factory reset one of his devices. He was able to contact customer support, and the people there were kind enough to reset his device counter after some negotiation, though not without making explicit that this was "one-time courtesy."

That was six years ago, and the situation has barely improved. Google had the opportunity to change the practice a while back with the introduction of YouTube Music, but it decided to stick with it, even extending the ten-device limit to the YouTube Premium video downloads.

You can use the offline features of your paid membership on up to 10 mobile devices at a time. If you try to download a video on a new device once you've reach this limit, the oldest of the 10 devices will be de-authorized. You can do this up to 4 times in one year.

Note: You can also view and manage your devices in your Google Play Music account settings.

There are a few things we need to look at. First, a digression compared to Play Music: There's no intuitive way to view how many devices you've activated through YouTube Music. You have to head to your Google Play Music account settings to do that. This might be somewhat understandable given the intertwined history of the services, but not intuitive at all for anyone not interested in the inner workings of Google's streaming platforms.

This paradigm extends to the device management in Play Music: When you try to deauthorize more than four devices in a year through the app, you'll only get a generic toast saying, "Failed to deauthorize selected device." The website is more straightforward and mentions the deauthorization limit, but there's no word on the fact that the cap also extends to YouTube Music and Premium (at least for me, a Google Music subscriber). 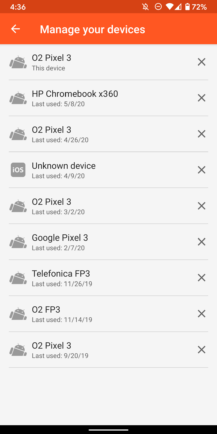 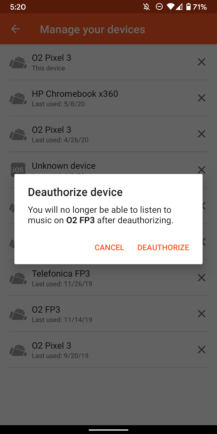 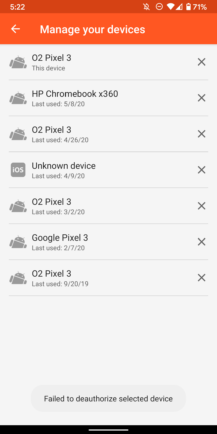 Left: Factory-reset handsets count multiple times. Middle: No mention how many devices can still be deauthorized. Right: No reason given why further deauthorizations fail after 2nd removal.

Second, the YouTube help page explicitly states that it will outright hinder you from using a feature you're paying for — you won't be able to download music or videos until your yearly allowance of four removals resets. At least you can still use all of the online features, which is an improvement, but I still don't want to give Google credit for that.

Third, the document mentions that the oldest devices you've used are kicked off your list automatically for YouTube. While that sounds good on the surface, that means you might get caught by the limit when it's too late since YouTube doesn't warn you once you reach the fourth yearly deactivation. Even if you don't buy your fourth new phone within a year, imagine this: you need to factory reset your handset because of yet another Pixel issue, only to find yourself barred from downloading songs and videos to the same device that you could previously use to do just that.

We can only guess why the limit is there in the first place. Does it have something to do with the fear of hosting pirated content? Even though the cap for uploaded songs has been raised from 50,000 to 100,000 on YouTube Music? Is it unwanted account sharing? Even though that's prevented by not allowing you to play music on two devices simultaneously? There are really no good reasons for having a limit this hard, and I've yet to come across another service that behaves similarly.

Google doesn't even have to invent some new elaborate form to keep you from using the service in an unintended way. Spotify already has a great system in place that could be copied. The app can be installed on as many devices as you please, and you can save a total of 50,000 songs to up to five handsets at 10,000 downloads each. There are no penalties in place when you use or have used more than those at any point in history. On the video front, Netflix lets you manage downloads on your devices on a setting page. Heck, YouTube could even outdo other services and allow you to download your music on as many devices as you please, but by now, I'd be happy with any solution that doesn't involve hard limits.