Following last year's promises, Google is getting ready to block ads that hit a certain resource limit in Chrome, to prevent things like crypto miners or poorly-made ads from making a dent in your battery life or network use. An "experiment" for this heavy ad blocking has already started in Chrome 84, with it expected to land in Stable by the end of August. 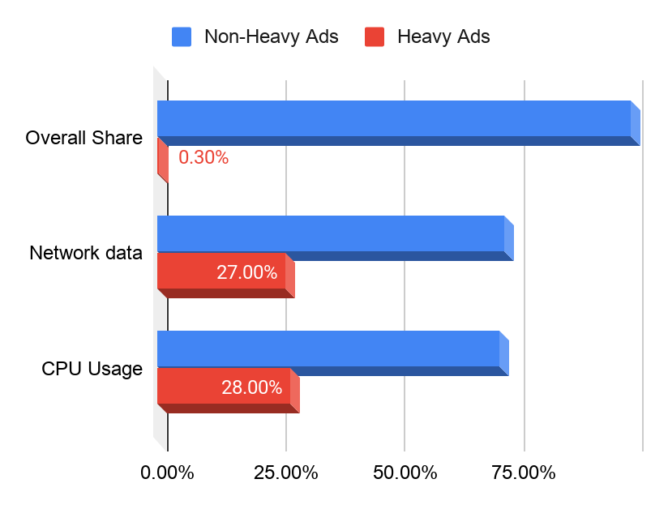 Comparison of "heavy" vs. non-heavy ads in both overall number, and network/CPU usage — clearly a handful of ads consume more than their fair share of resources. Image via Google.

The mechanism behind how the feature works is surprisingly simple: Google is going to impose a flat resource limit on all ads: Either 4MB of network data, 15 seconds of CPU use in any 30 second period, or 60s total of CPU usage. Any that exceed their limit will be removed and unloaded.

According to Google, a tiny fraction of ads (0.3%) are responsible for over a quarter of all ad-related network data and CPU usage, and new limits like these should prevent that small number from hurting your battery life, data cap, and overall internet experience.

Chrome has already started testing this feature in Chrome 84, the current Dev channel release, according to the heavy ad intervention documentation. Do note, it's controlled by two separate flags you'll have to enable/disable. We've checked in the latest release, and the flags are present, so the experiment has already started. The feature is slated to arrive in Stable around the end of August.

Developers and ad providers worried about the change should give the documentation a glance and try their own ads out once they're able to.