Twitter is working on floating notifications for replies and direct messages that pop up at the top of your screen when you scroll through the app. While the cards have a custom blue-ish tone to them, they don't add any extra functionality like those provided by Android itself do, such as "reply," "mute," "like," etc. Instead, they replace system notifications altogether when they pop up, so depending on your workflow, this might be the greatest thing ever or the worst possible decision.

The feature is currently live for many people using the alpha or beta release of Twitter. The in-app notifications are limited to the app itself — even when you just visit a website through a Chrome custom tab in Twitter, you'll get regular notifications for replies and DMs again. The custom notifications won't show up at all in the Android notification shade, so if you usually snooze messages and replies via the OS' on-board means, you probably won't like the change. If you generally find yourself swiping away all of your Twitter notifications anyway, you might love the move, though. 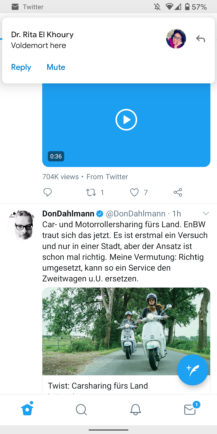 The in-app implementation feels like a band-aid solution for a bigger notification management problem on Twitter. When you open an Android system notification, which takes you to the corresponding message, reply, or like, the bell icon on the app's bottom bar still shows an unread badge, and when you tap it, the content you've just seen will be displayed as new. I'm probably not the only one who has relented to simply deactivating as many Twitter notifications as possible from the get-go.

To test the feature yourself, you can grab the beta and alpha versions of Twitter on APK Mirror, though a server-side switch might be involved, too — your mileage may vary. It's also possible that the pop-ups are live for some in the stable release already. As with all such experiments, Twitter might even decide to scrap it altogether before it reaches everyone.