The Fire HD 8 is one of Amazon's most popular hardware products, but it has been overdue for a hardware refresh. Now the company has finally released a new version of the Fire HD 8, and there are even some features you don't normally see in a tablet — like Qi wireless charging.

This time around, Amazon is releasing two devices in the Fire HD 8 lineup. There's an entry-level Fire HD 8, with 2GB RAM and 32GB of storage, and a Plus model with slightly better specifications and the addition of Qi wireless charging.

The new 10th-generation Fire HD 8 keeps the same 8-inch 1280x800 IPS screen and 2GB RAM as the previous model, but just about everything else is different. It uses a faster 2GHz MediaTek processor (vs. the 1.3GHz MediaTek MT8163V/B in the previous model), the base storage has been increased from 16GB to 32GB, and it now runs a modified version of Android 9 Pie instead of Nougat.

You can get the tablet for $89.99 with special offers (ads on the lockscreen), or $104.99 without special offers. Not a bad price for the hardware on hand.

Amazon has always offered slightly-upgraded versions of its tablets with more RAM and storage, but the new Fire HD 8 Plus also has one more advantage — Qi support. You don't see many tablets with wireless charging.

The Fire HD 8 Plus ships with a 9W wall charger in the box, and for a limited time, the tablet will also come with six months of Kindle Unlimited. There's also a bundle available with a wireless charging dock. 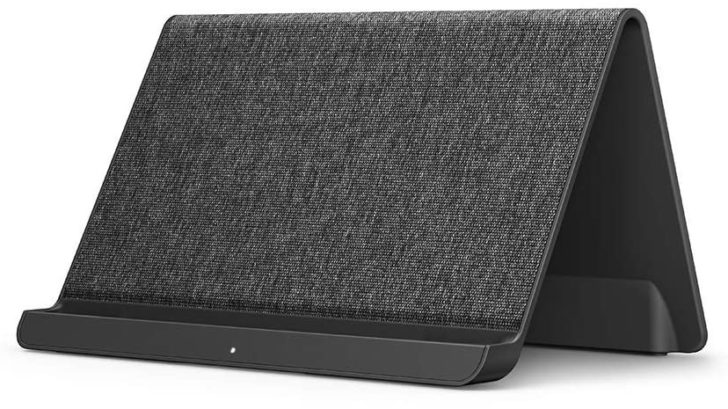 The wireless charging dock for the Fire HD 8 Plus

It costs $109.99 for the model with special offers, or if you don't want ads on your lock screen, the variant without special offers costs $124.99.

Finally, there's a new Fire HD 8 Kids Edition, which is just the entry-level model with a large case and a year of Amazon FreeTime Unlimited (a subscription service that offers books, educational apps, games, and videos). It costs $139.99.

You can now exit fullscreen YouTube videos with a swipe down