RCS messaging may not be the iMessage killer for Android that some folks hoped it would be, but it is finally giving us a decent replacement to aging SMS standards. Thanks to Google, we didn't have to worry about the carriers botching it, either. But, one iMessage-like feature has just been spotted rolling out in the wild for RCS "Chats" in Google Messages: Get ready to send emoji reactions.

We knew that this feature was being worked on based on earlier teardowns, but we didn't know if or when the feature would actually land. However, yesterday a couple of reports over on Reddit indicated that the feature was being tested, and now the latest beta releases of Google Messages seem to enable it for everyone. 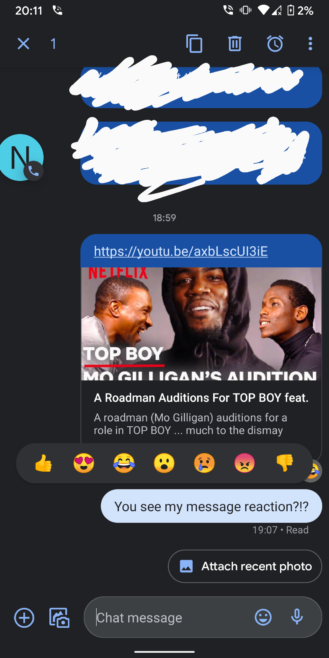 Left: a reaction on a message in Google Messages. Right: The reaction selector, apparently available with a long-press of a message. Images via /u/rwinftw and /u/radtheoristmango.

As you can see above, reaction emoji appear set in a small circle below and to the right of messages. Long-pressing a message lets you select a reaction, with at least seven different emoji options (visible above).

RCS conversation participants that don't have the feature get a message like this for reactions.

Right now, fallback is RCS-only, showing the emoji of the reaction and the message it was intended for in a standalone message (like many of us on Android are now used to being continuously spammed by in large group iMessage chats), with no fallback messages for SMS and no option for reactions in SMS-only conversations. Reactions also do not appear in Messages's web-based counterpart. 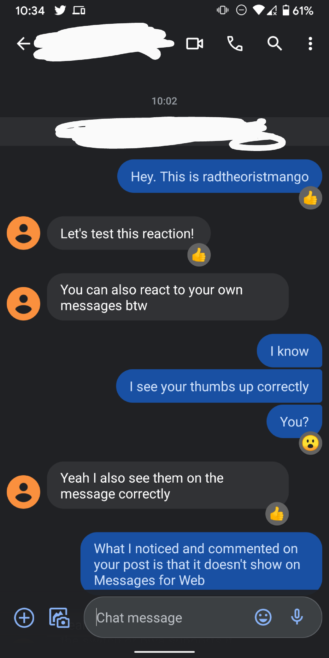 Reactions from two people in a single thread. Image via /u/radtheoristmango.

In tests, if both members of the conversation had reactions enabled and working, as expected, they were each able to see both their own and the other party's reactions. (We assumed that to be the case, or why else would this feature exist, but it's now verified.)

Though the feature was spotted in limited testing yesterday, it's now rolling out more widely. Though we originally suspected today's Beta release of Google's Messages app could be the trigger, we've spotted it live on the previous release as well — it's probably controlled by a server-side flag that Google has remotely enabled for more (perhaps all) devices.

With us expecting much of the news previously anticipated during Google I/O to land in the coming days and weeks, I think there are very good odds we'll be hearing more about this feature from Google soon.

The feature has been spotted rolling out more widely, with reports of chat message reactions appearing in more RCS-enabled conversations today. We've tested it as appearing in both the recent beta versions of the Messages app (6.1.088 beta and 6.1.087 beta) so we don't think this wider rollout is tied specifically to today's beta update. Some reports claim seeing the feature on stable releases, but it hasn't appeared there in our own testing. Our coverage has been updated with this information.

A couple months after seeing these reactions become available to more and more users, Google's finally going official with the feature.