I've been searching for the perfect note-taking app for a long time. I like Google Keep for its simplicity, but that's also its biggest crux. It's missing a few too many features to become my one-stop solution. Evernote, on the other hand, is too blown up for me. It feels sluggish and overloaded with features I'll never need (at least that was the case when I last used it). Bundled Notes, a new app created by indie developer Xavier Tobin, might become the perfect middle ground for me and might even replace my to-do app along the way. It's still in beta, but it's en route to becoming a great cross-device solution for notes and project management once it goes stable.

A novel approach to notes and project management

Unlike Keep, which only works with labels, Bundled Notes introduces a folder-like architecture that also gives it its name: bundles. Individual notes all have to sit in a specific collection or bundle, so you need to create one of those before you start adding notes. The interface should be instantly familiar to anyone using Google Keep, with an action bar at the bottom that lets you interact with bundles, notes, and text. 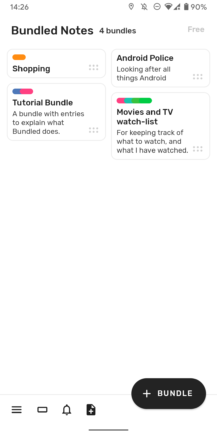 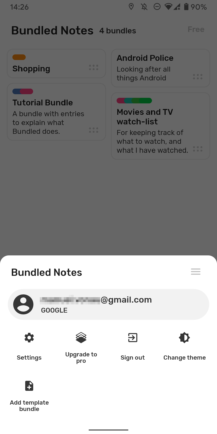 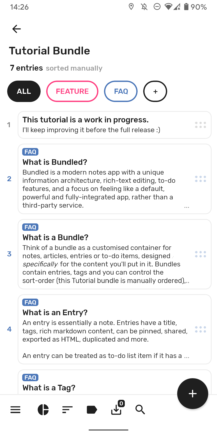 Your home screen consists of your bundles. The bottom bar lets you create new collections, view your reminders, switch between grid and list view, and access settings and your account. When you first start the app, you can choose to create one of three example collections to become familiar with the way Bundled Notes works. You could stop at this point and use it as a regular note-taking app, but it only gets really interesting when it comes to project-management capabilities.

To organize your notes and/or to-do items within bundles, you can create tags by tapping the plus button below a collection's title bar. Once you've chosen a name and a color, there's an option to make it a special "To-do tag." That will turn any note with that tag into a checklist item, and it's possible to choose what happens when you check them: other than just being marked as done, they can also automatically change to another tag. 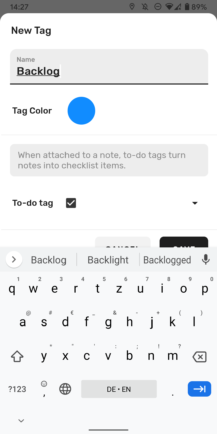 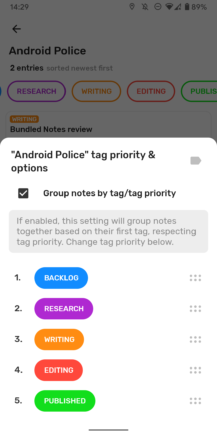 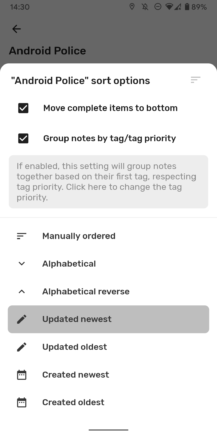 That way, you can build custom workflows for to-do lists or hobbies. You could create a "films" bundle for collecting stuff you want to watch. When you tick off a movie, it can automatically roll over to a "watched" tag. The same is true for complicated projects when you create categories like "backlog/to-do," "production," "alpha," "beta," "stable" (depending on what you do). All tags sit below the title bar, and tapping them lets you use them as filters. A long press lets you edit them.

Once you've populated a bundle with tags and notes, you can try filtering, sorting, and grouping them via the options in the bottom bar. It's possible to add notes in batches, search through bundles, hide entries that are marked as done, pin notes to the top, and more. You can also change the layout options and add a bundle to your home screen if you'd like to keep notes separate from to-dos. In the future, it'll also be possible to share collections with others, and you'll be able to use a kanban board layout, which is just perfect for to-dos. 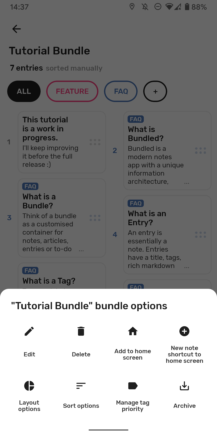 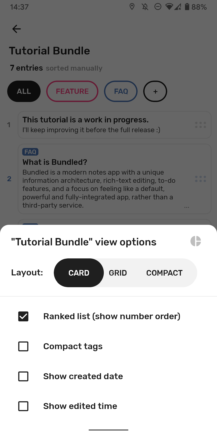 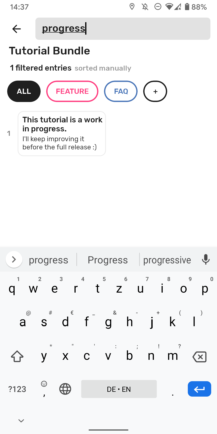 Some more options in bundles.

Compared to Keep, the learning curve is a lot steeper. Many buttons aren't labeled and some invoke extra functionality upon long-presses, so getting started with the app involves a lot of trial and error. Once you get through some of the quirks, though, Bundled Notes feels far more powerful than Google's native note-taking app.

Like Keep, Bundled comes with a dark mode (including an AMOLED black theme), but you have to manually enable a "follow system theme" option in settings, which I would've loved to see as the default behavior.

Bundled Notes relies on Markdown, but it's supplemented by a bar above the keyboard with regular formatting buttons. That gives you the best of both worlds, whether you're a die-hard Markdown fan or not. If you don't like seeing Markdown syntax while viewing your notes, you can activate a reading mode without it, though as long as you edit, there's no way around it. I have some gripes with bullet and numbered lists, too. In contrast to Keep, new entries aren't created automatically, so you have to add bullet after bullet or number after number yourself — that becomes tedious pretty fast, and hopefully something that's changing before the app goes stable. 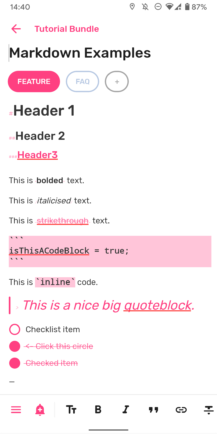 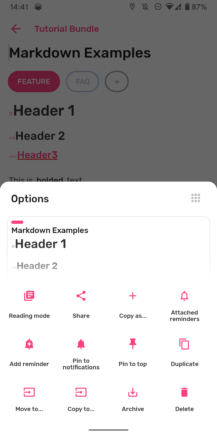 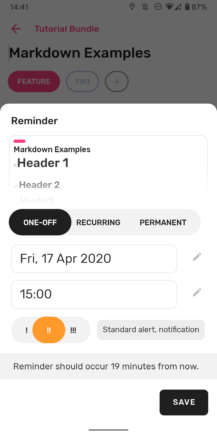 Like a true to-do app, Bundled gives you a ton of reminder features. You can create multiple one-off alarms for a single note, recurring options (paid functionality), and permanent reminders that stay in your notification tray and can't be swiped away — good if you really don't want to forget about a task or a shopping list. It's also possible to duplicate or copy notes to other bundles, and they're shareable as plain text or HTML documents.

Photo and file attachments are currently are on the roadmap for a future release. Further formatting options are supposed to come to the bottom bar soon.

A quick look at the upcoming web app, and a demonstration of the syncing speed between different devices. from bundled

A web app is in the works and supposed to launch in the coming weeks. From what we know, it feels and looks a lot like the Android app, so you probably won't have to worry too much about relearning the interface on your PC.

An iOS app is currently not planned.

Much like Keep and Evernote, content stored on Bundled is encrypted at rest, but not on the client side. The developer wants to add special end-to-end encrypted secure notes in a future update.

Currently, it's only possible to sign up for the app with your Google account, but the developer is working on a rewrite of the login mechanism, which might make it possible to create an account via email.

The app's basic functionality is free of charge, but you're limited to 5 bundles with 300 notes in each. The developer says this is meant to reduce API and infrastructure costs of free users. That seems like a fair compromise, especially since the product is free of ads. If you want to use the web app (once it's available), more bundles and notes, and advanced reminder features, you have to subscribe, too. There's a monthly tier going for $1.89, but you can also choose to pay for the yearly subscription at $15.

While it's obvious that there is still some work left until the app can leave beta, it's already very promising. I instantly fell in love with the interface and the smooth animations, despite the steep learning curve introduced thanks to all the unlabeled buttons. Once you familiarize yourself with the capabilities of the app, that criticism fades into the background, and maybe the stable release will introduce a better on-boarding experience that guides you through all the features and quirks. The included manual bundle already proved to be a good resource.

If you're looking for a more capable, prettier alternative to Google Keep and want a to-do app in the same product, Bundled Notes might be for you. Just keep in mind that you need to pay to unleash the full potential, and that there's no iOS app, which might be a dealbreaker for some. I, for one, am eagerly awaiting the web app to see if I can make the full switch.

The promised web app has finally arrived as a beta for premium users, accessible on bundlednotes.com. It isn't fully finished, but it should already feel familiar to anyone using the Android app. Depending on the size of your browser window, your bundles are displayed in a sidebar or on a homescreen. Other than that, the website follows the general paradigms introduced in its Android counterpart: Tags at the top, options in a bottom bar, formatting via markup. 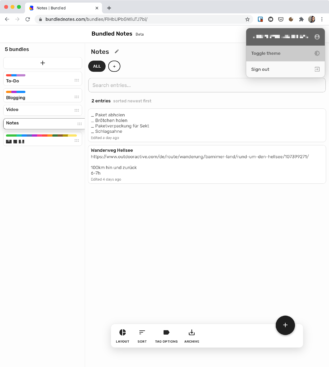 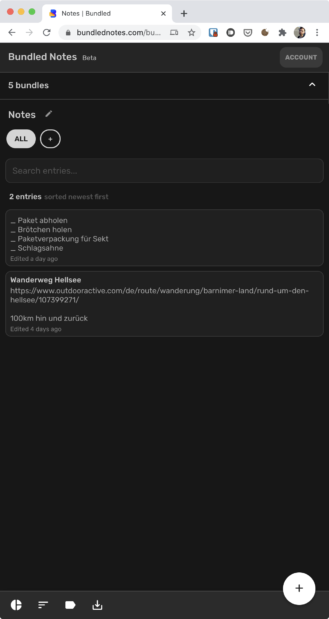 The responsive layout reacts to your browser window's size.

For now, the app defaults to its dark theme when you start it, but you can always toggle light mode from your account settings in the top right. Reminders aren't supported yet, and some formatting options like bullet lists are still missing, but the goal is to reach full feature parity with the Android app. The website will also soon support selecting a default bundle for startup, editing notes in new tabs, quick adding, exporting, proper account management, and more web-focused things.