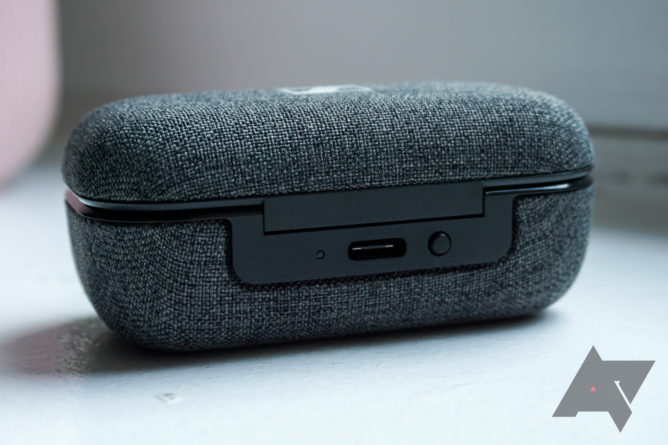 The design of the Momentum True Wireless 2 (MTW2) isn’t a huge departure from the first generation, but that's no bad thing. You’d be forgiven for thinking that the earbuds are identical to their predecessors, but they are ever so slightly smaller in size. Although the fit is great for me, those of you with smaller ears might find them a little difficult to position securely since they’re quite chunky. There is a range of tips to choose from, at least, but sadly no foam options. At 6g per earbud, they’re light enough that they don’t get too uncomfortable during longer listening sessions, but after a few hours, you will certainly be aware of them.

Once again, you get a premium case covered in a textile material not dissimilar to a Pixel fabric case, which feels nice in the hand and is now a slightly darker shade of grey. A USB-C port can be found on the rear of the case for charging, alongside a button and light for checking how much is left in the battery. Sadly, your $300 doesn’t get you wireless charging. Strong magnets are at play both in the satisfying snap of the case’s lid and to secure the earbuds when you pop them in. Each earbud also has its own battery/connection light plus wear detection sensors that allow your music to be paused when you take them out and play again when you return them. 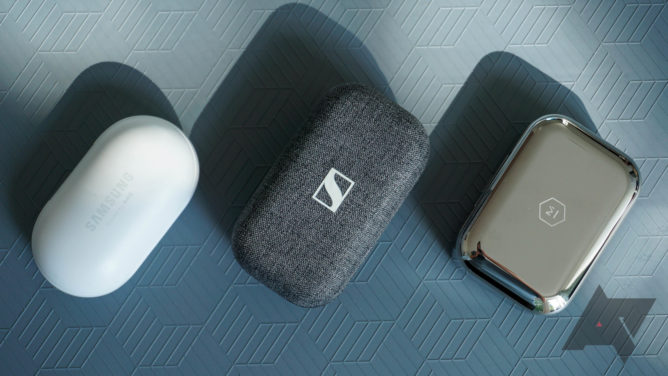 Between the Galaxy Buds (left) and Master & Dynamic MW07 Plus, the MTW2 case looks rather large. 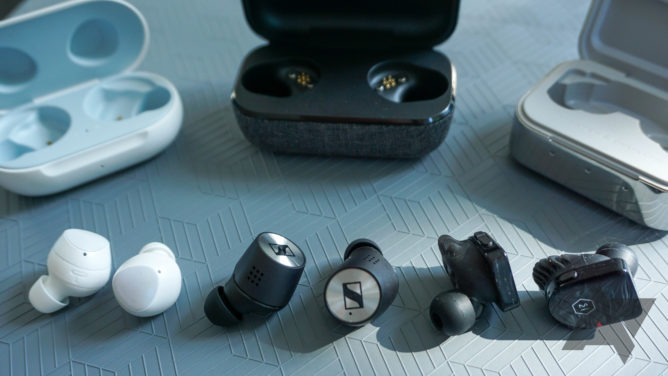 I’ve never been a fan of touch controls, but they do seem to be sticking around when it comes to true wireless earbuds. Sennheiser’s latest implementation is no better or worse than any other — single, double, and triple taps are for actions like pausing, answering calls, or enabling ANC, while long-pressing handles volume levels. If you don’t like the default controls, it’s easy to tinker with them in the app. There is a learning curve, especially with triple taps, but there are helpful bleeps that point you in the right direction. 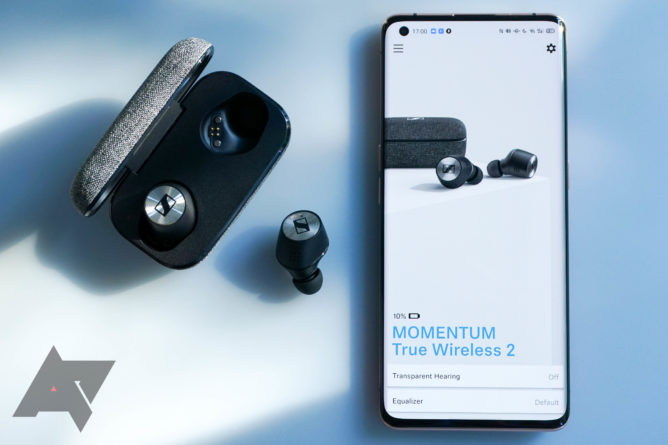 While not specifically designed with exercise in mind, the MTW2 are IPX4 rated, so a little sweat or rain won’t cause problems. Compared to a similarly-priced pair of earbuds from Master & Dynamic, these Sennheisers do feel a bit cheaper but they still look the part. You don’t get any bells and whistles in the box though — just ear tips and a charging cable. I suppose you don’t really need anything else, but it feels a little sparse given the high price tag.

Sennheiser has a reputation for stellar audio quality that's absolutely upheld here. Thanks to their 7mm drivers, the MTW2 sound fantastic, with bass notes seemingly too powerful for the earbuds’ small size, as well as rich mids and detailed highs. The soundstage is also surprisingly wide — all in all, it’s a balanced profile that will complement pretty much any type of music you can throw at it. And unlike some rivals, the app includes an equalizer that, although a tad unintuitive to use at first, will help you get the sound you want. Codec support includes AptX, AAC, and SBC. In terms of active noise cancellation, they probably sit somewhere below what Sony has been able to achieve but slightly above other competitors. They struggle to block out higher-pitched sounds at times but mostly deliver good cancellation without any annoying audio byproducts to detract from your music.

Connectivity was without a hiccup for me (Bluetooth 5.1), although admittedly I haven’t been hitting the same challenging environments I would usually test in, such as riding the London Underground or passing through busy inner-city areas. There was a worrying amount of audio/visual latency when I first fired up a YouTube video, but thankfully this was rectified by a day-one firmware patch (that somehow took almost an hour to install) and ceased to be an issue thereafter. Call quality is pretty good for earbuds of this kind, but don’t expect to be heard as loud and clear as you would with wired or over-ear headphones. Probably the only other notable misstep, aside from not having wireless charging in the case, is the master/slave relationship of the buds. Only the right one can be used independently, which isn't a dealbreaker but is certainly an annoyance.

Useful features include a transparency mode, which passes through outside noise so you can chat with someone in a shop without taking the earbuds out. Unlike some others I’ve tested, they pause your music/podcast at the same time so you don’t miss anything. As I mentioned before, whatever you’re playing will be automatically paused when you take an earbud out, too. Unfortunately, they can’t connect to more than one device at a time, and although there’s supposed to be an easy way to switch between previously paired devices in the app, it doesn’t appear to be there yet (at least not in the Android version). You can access the Google Assistant with a single tap of the right bud, but you can change that if you wish — it works fine, although I still don’t find myself using it all that often when out and about. 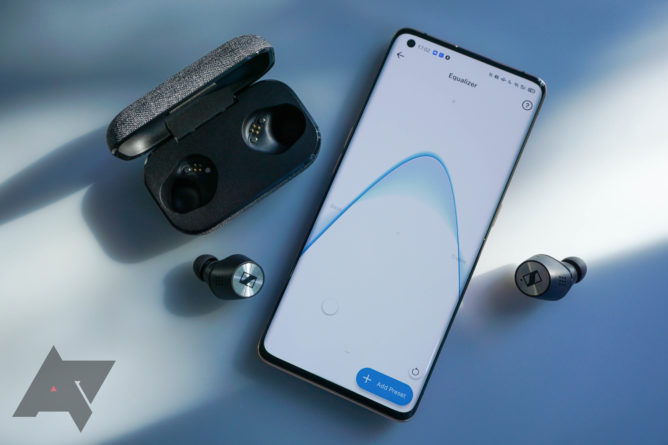 I managed just over 7 hours of battery life before needing to charge the earbuds, although your mileage may vary depending on how much you call on the ANC. While there are competitors out there with better battery life, this is still double what the first-gen model offered and roughly on a par with Sony’s well-placed competitors. The case has around three additional full charges, so you should be able to get away without topping them up them too often. When you do, a full charge will take 1.5 hours, but just 10 minutes will get you 90 minutes of playback.

Sennheiser Momentum True Wireless 2
9/10
Yes, if you can afford them. The Sony WH-1000XM3 is the main rival here, but the Master & Dynamic’s MW07 Plus isn’t far behind. Of these three, I do find myself drawn to the Sennheisers because I really enjoy the sound profile, even if the MW07s have preferable tactile controls and the Sony model is marginally better for ANC. Ultimately, this is a buying decision that will come down to price and personal preference. If money is no object, you won’t be disappointed if you spend the $300 to buy these, just as you’ll do fine with the Sonys if $230 is as much as you can afford. If they’re available in your region, the Libratone Track Air+ make for a fine alternative for a lot less money.

Think of these as proof that you get what you pay for in life. Sennheiser is a tried and trusted audio brand, and there's no doubt it has delivered a refined set of true wireless earbuds with an impressive feature set and solid battery life in the Momentum True Wireless 2. And most importantly of all, they just sound damn good. 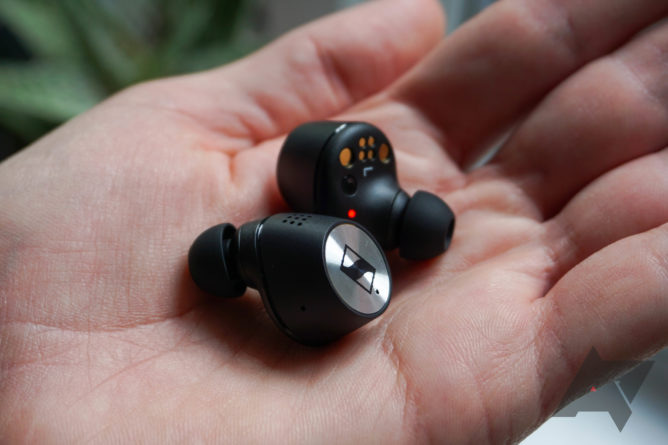