The original Google Home speaker was released almost four years ago, and quite a lot has changed since then. Google has released several more smart speakers, like the Nest Mini and Home Max, and the third-party ecosystem of Google Assistant speakers has also taken off.

In all that time, the speaker that started it all hasn't received any hardware revisions. Sure, its software has been constantly improving, but it still sounds the same and has the same air freshener design. It's high time Google remodeled the Home (pun intended), and we've put together a few improvements that we'd love to see.

Apple's HomePod speaker doesn't have much going for it, considering even most Apple diehards have a distaste for the Siri voice assistant. However, it does have one feature that I would absolutely love to see on a new Google Home. Its 'spatial awareness' functionality detects where the speaker is located in a room, and adjusts sound levels for the best possible quality. Here's how Apple describes it:

"With spatial awareness, it automatically analyzes the acoustics, adjusts the sound based on the speaker’s location, and separates the music into direct and ambient sound. Direct sound, including the main vocals and instruments, is beamed to the middle of the room, while ambient sound is diffused into left and right channels and bounced off the wall. So the entire space is filled with rich, well-defined tones."

The Google Home Max has a similar feature, called 'Smart Sound,' where the speaker adjusts sound output by listening to the acoustic properties of the room. However, the Home Max is designed to point in one direction, whereas the regular Home (and Apple's HomePod) has 360-degree sound.

The existing Google Home has interchangeable bases, which you can purchase for $20 a pop from the Google Store. There are exactly three options — Coral, Metal/Carbon, and Copper. Orange, teal, purple, and white metal bases used to be available, but those vanished at some point. You can still occasionally find them on eBay. 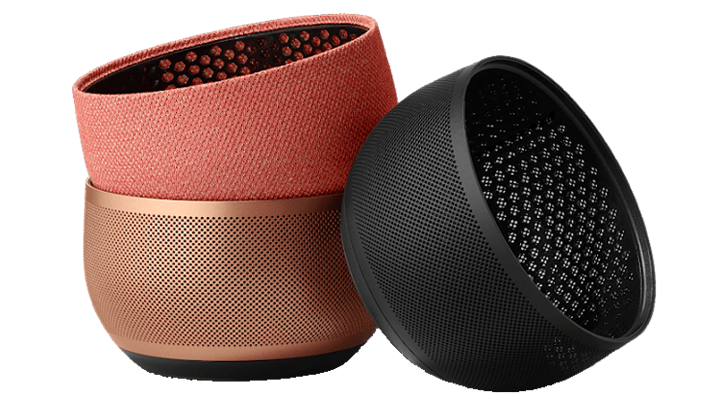 Whether or not the next Google Home has replaceable bases, more color options would be much appreciated. The Nest Mini and Nest Hub both come in Chalk, Charcoal, and Aqua variants. The Nest Mini has an extra 'Sky' color (which I absolutely love), and the Nest Hub has a less-intense 'Sand' version.

It would be nice to see the same color options for the Google Home as the Nest Mini/Hub, but even more variants would be great. Give me Avocado Green, bright yellow, and maybe even the Amazon Echo's Oak pattern. Who doesn't love wood grain?

Many smart speakers support stereo pairing, where you can set one speaker as the left channel and another as the right channel. Nearly every competitor to the Google Home includes this functionality, including the Amazon Echo, the Apple HomePod, various Sonos speakers, the Google Home Max, and even Insignia's dirt-cheap Assistant speakers.

Considering just about every smart speaker supports stereo pairing except the Google Home, the feature's absence from a Google Home 2 would be embarrassing. Update: Google added stereo pairing to the original Home speaker late last year.

While there are plenty of rugged/waterproof speakers with internal batteries, there are a few smart speakers designed to simply be moved throughout your home, like the Fabriq Chorus.

The Google Home costs $129.99 (though it often goes on sale for $90-100), while the Home Max is a whopping $399.99. It wouldn't be a bad idea for Google to release a 'Google Home 2 Plus' with a few added features, while still being physically smaller than the Home Max. A good comparison is the Amazon Echo Plus, which costs around $80 more than the regular Echo, but has a built-in Zigbee hub and higher quality speakers.

What might Google include in a premium Google Home? Improved speakers are a must, but perhaps the device could also serve as a Google Wi-Fi station, and an AUX input port wouldn't hurt either. Perhaps Google could also add an ambient light sensor to dim the Home's lights in dark rooms.

YouTube TV will get 14 new ViacomCBS channels, including Comedy Central, Nickelodeon, and MTV