The Google Authenticator app has undergone its first facelift since 2017, making the jump from version 5.0 to 5.10. But the visual makeover — including a much-needed adaptation to newer phones' aspect ratios — belies a major change that will make it easy for you to port your keys over to another phone.

Up to this point, Google Authenticator was one of many apps that provided the extra layer of code-based authentication in any two-step verification process that supported it — you'd be better off here than with an SMS code. It wasn't good for looks, though, having debuted just at the cusp of the move away from 16:9 smartphone screens. And if you wanted to move your app's credentials off to another phone, you had to go through a sometimes messy process to get all of your accounts set up again. 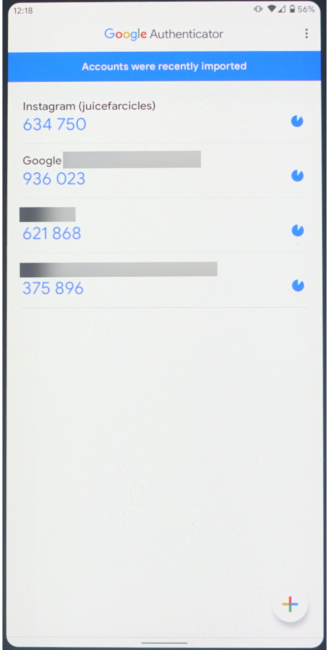 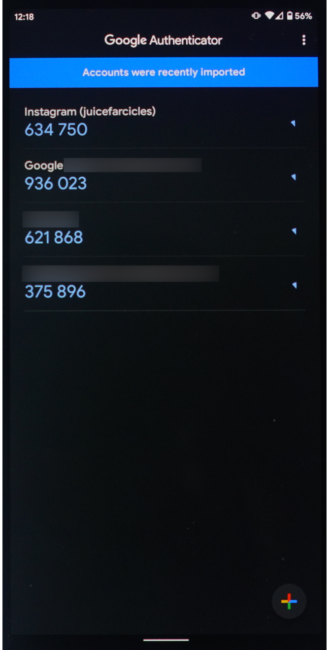 Enter the refresh! (Apologies for the janky photos — the app now prohibits on-device captures for screens with sensitive data, just as it should.)

We've got Material Design 2.0 in play and a true-black dark theme for OLED fans out there. Plus, there's an embedded import/export tool in the overflow menu.

Users can select which accounts to export and then, after verifying with device PIN entry or biometric authentication, display a QR code that can be scanned by another phone with Authenticator in the import mode.

Google just put up an official blog post further detailing the new transfer process. Of particular note, the post is specific that no data is sent back to Google's servers during the transfer, it passes directly from one device to the other.

The update is slowly rolling out, so you can try your luck at the Play Store or grab it from APK Mirror.