This article is part of our Linux on Chrome OS series.

This isn't a simple compilation of the best Linux apps, because plenty of those exist already. Instead, the goal here is to recommend solutions for tasks that cannot be adequately filled by web or Android apps. For example, serious photo editing isn't really possible through the web, and options on the Play Store are limited, but Gimp is perfect for it.

This guide assumes you have already set up the Linux container on Chrome OS. If you haven't, follow the instructions here.

You should also set your Chromebook's Downloads folder as a shared folder from the Linux section of the Chrome OS settings, so your Linux apps can access Chrome's files. Once you do that, the Downloads folder will appear in the file picker on Linux apps (if not, you can get to it from mnt > chromeos > MyFiles > Downloads).

For years, one of the main arguments against Chrome OS has been the lack of a professional-level photo editor like Photoshop. While you can try to install Photoshop through CrossOver for Chrome OS, there's something that will work much better: GIMP (GNU Image Manipulation Program). 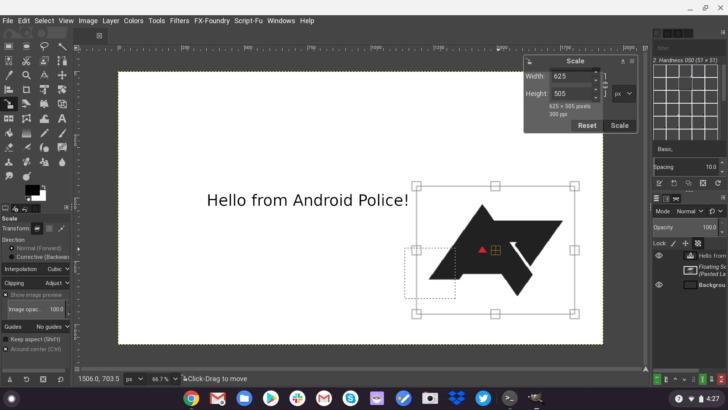 GIMP is undoubtedly one of the best free image editors available, even if the name is terrible, and it's certainly the best one for Linux. Just like with Photoshop, there is a learning curve, but GIMP is an incredibly powerful tool. You can use multiple image layers, draw with various brushes (including with a stylus, if your Chromebook has one), blur parts of an image, and much more. GIMP can open and save many different types of files, including XCF, JPEG, PNG, PSD, WebP, BMP, and others.

GIMP can be installed with this Terminal command:

This installs three packages: GIMP, a collection of plugins that add extra functionality (my favorite is Resynthesizer, which functions like Photoshop's Content Aware Fill), and the support library required for some plugins. Once the packages are done installing, GIMP will appear in the Chrome OS app drawer.

Google Docs and Microsoft Office Online are definitely the easiest ways to edit documents on a Chromebook, but they can't open every file format. They also have limited functionality offline, and require uploading each file you want to work on. That's where LibreOffice comes in. 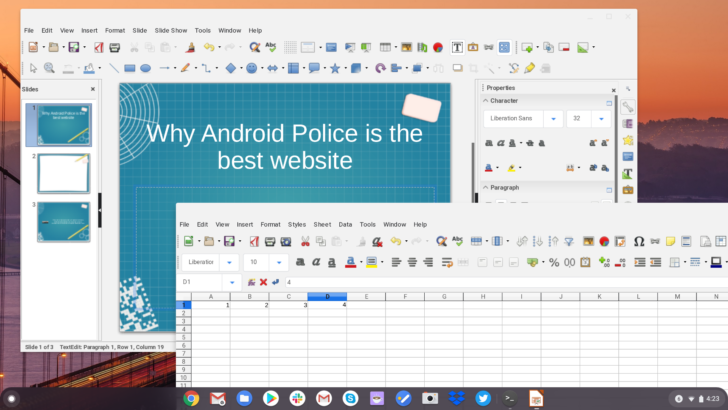 LibreOffice is an open-source office suite that works on a variety of desktop platforms. It includes a word processor (Write), a spreadsheet program (Calc), a presentation editor (Impress), and a vector graphics editor (Draw).

LibreOffice can be installed with this Terminal command:

LibreOffice is my personal favorite choice of office software on Linux, but there's another popular option that works great on Chromebooks: WPS Office. WPS is developed by Zhuhai-based Chinese software developer Kingsoft, and it looks and operates very similarly to newer versions of Microsoft Office. It comes with a word processor, a presentation editor, a spreadsheet program, and a PDF editor. 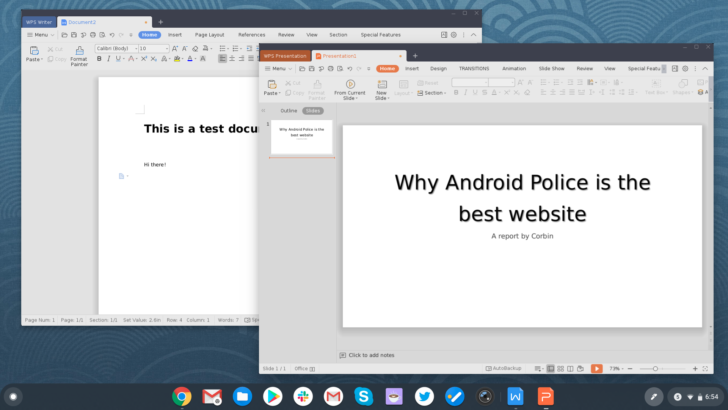 WPS can't open as many document formats as LibreOffice, but it can handle Microsoft Office files. The Linux version is community-developed.

Go to the WPS Office Community downloads page and click on the .deb link under the latest release. After the download completes, open the Downloads folder in the Chrome Files app, and double-click on the .deb file to install it. WPS Writer, WPS Presentation, WPS PDF, and WPS Spreadsheets will appear in the Chrome OS app drawer.

Visual Studio Code is my personal favorite code editor. It has a ton of great features, including auto-complete for popular languages, debugging, an integrated Terminal, support for Git (review diffs, stage files, etc.), and more. 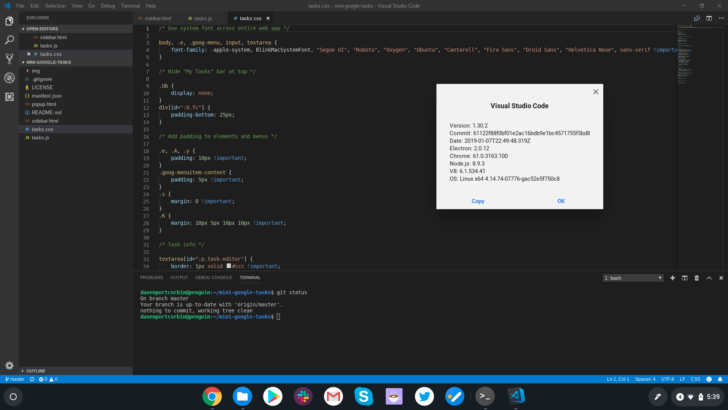 Visual Studio Code can also be extended with optional extensions and themes, so if a feature you want is missing, there might be an extension for it. New updates come out about once a month.

On the Visual Studio Code download page, click the '.deb' button. After the download completes, open the Downloads folder in the Chrome Files app, and double-click on the .deb file to install it.

Once the installation is finished, a Visual Studio Code icon will appear in the Chrome OS app drawer.

Transmission has always been my personal favorite BitTorrent client. If you need more options than what the handful of torrent clients on the Play Store can provide, you should give it a shot. 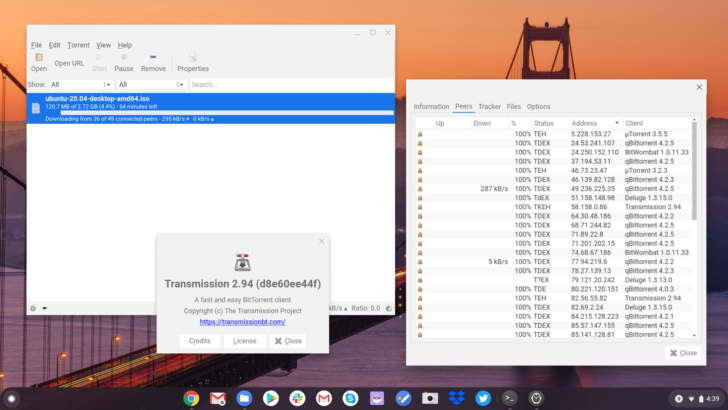 It's light on system resources, has a wide array of options, and is very fast. You can't ask for much more in a desktop application.

Transmission can be installed with this Terminal command:

Once the package is done being installed, Transmission will appear in the Chrome OS app drawer. If you see a message about connecting to a remote or local server, just click OK.

So there you have it - the best Linux apps to try out on your Chromebook. Until Google irons out the remaining issues with GPU acceleration, games and other graphically-intensive applications aren't very usable on Chrome OS, but these apps should at least make your Chromebook a bit more powerful.