MediaTek has just revealed a new gaming-oriented chipset for its G series: the Helio G85. Pricing isn't public, and plenty of the more interesting specs have yet to be revealed, but the new chip expands the company's gaming chipset lineup and smartphone manufacturer options for gaming devices.

The company hasn't revealed enough information for a full spec table, but the G85 is an eight-core chipset with LTE support — no 5G. Built at 12nm, it has two big A75 cores clocked at up to 2GHz, and six smaller A55 cores at up to 1.8GHz. Paired with that is an ARM Mali G52 GPU clocked at up to 1GHz, ostensibly boosted by MediaTek's "HyperEngine" optimizations for improved gaming performance and connectivity.

It supports up to 8GB of RAM and FHD+ resolutions at 60Hz, plus Bluetooth 5.0 and 802.11ac. When it comes to cellular connectivity, it sports category 7 LTE with 2x CA and VoLTE/VoWi-Fi. 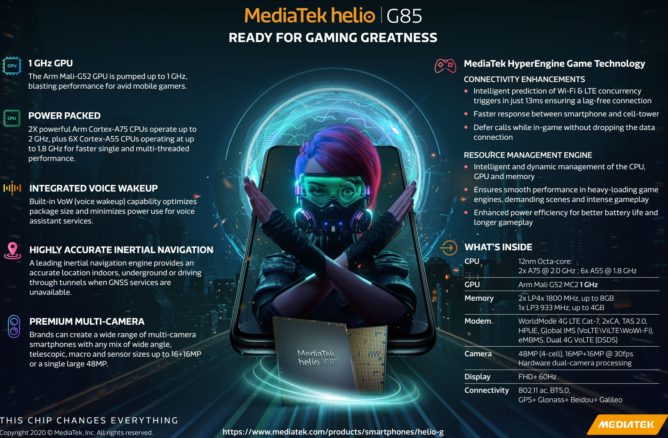 The chip supports Dual 4G SIM, VoW for reduced power with things like Assistant hotword detection, inertial navigation, and hardware support for AI camera tasks — this is the sort of stuff you'll find on most modern chipsets. It also supports multi-camera arrays (seemingly a limit of 2) at sensor sizes up to 48MP (or 16MP+16MP) with hardware-accelerated dual-camera bokeh/portrait mode and up to 240fps video recording.

Based on specifications and model number, the Helio G85 presumably fits between the existing G90 and G80 in MediaTek's lineup, which places it above mid-range but below the company's flagship gaming chipsets.

Recently, MediaTek was accused of cheating on benchmarks. If and when we get a chance to see the upcoming G85 in action, it might be worth taking any benchmark scores with a grain of salt — unless the company changes its stance.