When it comes to flip phones with folding displays, the Galaxy Z Flip might be a snazzy little number, but some people still prefer the Moto razr. Sure, it has its shortfalls, but if you're all about the form factor above everything else, then you probably might want to grab two of them for the price of one while supplies last at Motorola.

The razr seems like a phone that was planned some years ago and planted there: its main display has a resolution of 720p+, it has a Snapdragon 710 chipset, it still runs on Android 9 Pie, it works exclusively on Verizon's CDMA and LTE networks (no 5G), and it has a plastic build with resin coating. It also might not last as long as Motorola promises it to last. But hey, the phone feels less dainty than a Z Flip does and the software pretty much does the job as it does on most Motorola Androids. 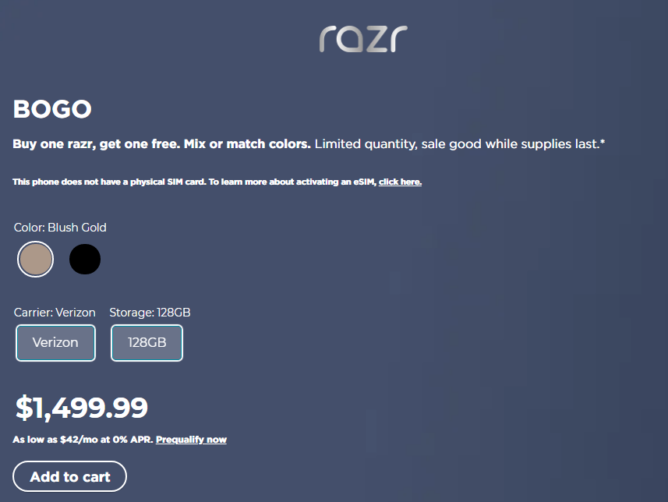 There's a small bit of irony that Verizon is holding a Mother's Day BOGO sale for a few phones and, with the razr being one of them, having the company describe the device as "Not your mom's flip phone." Also, you'd need to activate a new line to redeem the offer. That's a bit much to ask for, we think — especially if you choose to buy direct from Motorola (again, while supplies last), where you can get two razrs for the singular MSRP of $1,500! You'll have to use them on Verizon, but at least you'll be able to gift one to someone on another Verizon account.

If you're purchasing two devices of the same color, you'll need to go to your cart and adjust the quantity to 2.