In addition to its range of speakers, Sonos also makes a premium soundbar. Sadly, the latter hasn't been updated since 2013, but new leaks hint the Playbar is about to get a fresh coat of paint. Renders of the revamped soundbar have just leaked, showing the device's upcoming design and potential specs.

Sonos appears to have gone for a more modern, cylindrical design, which could mean there would be only one possible orientation. According to some beta testers, the revamped product will be 10" longer than the previous one, meaning it would be about 45" long. Buttons have also seemed to have evolved, as renders show touch-sensitive ones on the top to control playback. As for the colors, there should be a white and a black version, as renders of both colors have leaked. 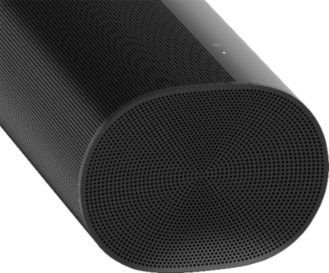 In terms of technical specifications, the new Playbar could feature AirPlay 2, 802.11ac Wi-Fi, HDMI ARC, and Dolby Atmos. This information is not confirmed yet and renders also seem incomplete, as there is no visible power port on them. We'll hopefully know more about it soon, as the company is expected to release its new lineup on May 6th.