If you've never heard of a Red Magic smartphone, we're not surprised: the gaming-focused sub-brand of Nubia (itself a sub-brand of ZTE) doesn't have a lot of name recognition in America, or really anywhere. But this isn't the first time we've reviewed a Red Magic phone, and I've got something of a soft spot in my heart for last year's Red Magic 3S. As an everyday smartphone, it really wasn't fantastic, but its largely stock Android software and strong gaming performance at a seriously low price made it an attractive option as a dedicated gaming phone, for people who want such a thing (and I'm not sure how many such people there are). Sadly, the new Red Magic 5G is much harder for me to recommend. While its price remains crazy — delivering a Snapdragon 865 and (limited) 5G connectivity for just $580, a full $320 less than a OnePlus 8 Pro — the Red Magic 5G's frankly terrible software makes it frustrating to use and difficult to give much praise. This is a pretty big and heavy phone, with a design similar to last year's Red Magic 3S. While the aluminum back has been dropped in favor of a glass one, and the earpiece is slightly smaller, it's otherwise pretty similar. On the right side, you have the capacitive triggers, volume and power keys, and an exhaust vent. The left has a switch that takes you to a "Game Space" mode, a pogo pin connector for the company's "Magic Adapter" dock, and the corresponding intake vent. The headphone jack is up top, and the Type-C port, dual SIM tray, and down-firing speaker are on the bottom.

In-hand, it's a very chonky phone. Folks that don't know better tend to dismiss differences of a few mm on a spec sheet out of hand, but the extra couple it has over even the Galaxy S20 Ultra are immediately felt. It's an awkward device to use as a phone, and there will be plenty of times a button or menu's positioning will force a two-handed maneuver.

If you compare it to a "normal" phone, the size is comical, but I think gaming phones are a special niche and much more useful as secondary devices, which makes it less of a problem — you're probably not going to using it for the same things. But if you are, keep the size in mind.

Just because it's a big phone doesn't mean it has the biggest screen, though. At 6.65", it's actually smaller than the one in the OnePlus 8 Pro (6.78") or the Galaxy S20 Ultra (6.9"), and it hits a lower resolution to boot: This is "just" 1080p. The extra bump to 144Hz over 120Hz isn't especially noticeable on a display of this size, but it's definitely smooth, and it seems to get pretty bright outdoors. It also crushes blacks pretty badly at lower brightness, but the screen was surprisingly uniform and won't be a problem with dark theme backgrounds at night. The added bezel also makes it a little easier to hold in landscape when playing games, with fewer accidental touches.

The in-display fingerprint reader is of the optical variety and works pretty reliably for me, even in landscape, though I wish it was a bit further up the screen. I also didn't like the haptics at first, which were strong but not very sharp, but they do well in games.

The Red Magic 5G also had a headphone jack, which is a rarity for phones in 2020. (With the high-end specs and crazy-low price, that's a feature trifecta that's sure to grab attention in certain circles.) 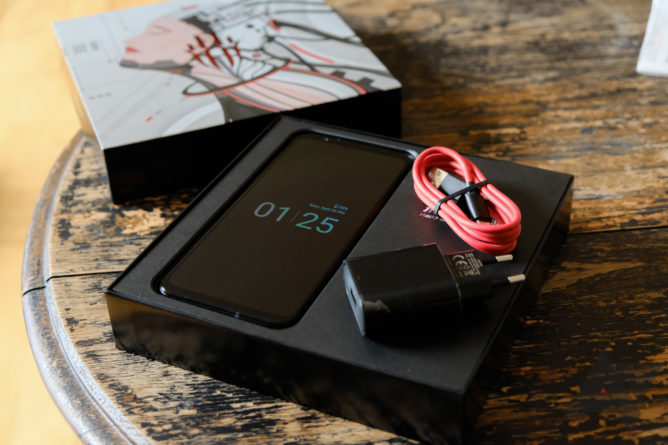 Included in the box is a charging brick, USB Type-A to Type-C cable, a SIM ejector, and the expected warranty cards and manuals.

Words can't honestly express how frustrating Red Magic OS is, and I haven't looked forward to the end of a review so much in a long time. I'll try to keep my complaints short:

There were two things about Red Magic OS I did really enjoy, though: The customizable always-on display options, which are pretty snazzy, and a better, OnePlus-style volume channel adjuster (which can't be screenshot, I don't know why.) Even so, I hope ZTE/Nubia/Red Magic revise this new software approach in the future, because so far it's a big step back.

The software can't stand in the way of flagship-grade hardware, though. Although I had some stability problems, which could be due to the pre-release nature of the software I was using, the phone was still very, very fast. Outside the usual Android jank in certain apps (like the Play Store), it was uniformly smooth. However, I did have some issues with network performance and the phone sometimes requiring a reboot to get a proper connection to cellular data.

When it came to game performance, the phone was solid. The capacitive triggers are a bit touchy, but you can configure their sensitivity a little bit, and they add quite a lot to some genres, like shooters (even if a dedicated controller is probably better). I did run into a problem where Fortnite was convinced I had USB debugging enabled on my phone even though I didn't (probably a thinly-veiled indicator that the phone is failing a SafetyNet check, which it is) so I couldn't actually play the game, but less restrictive titles had no problem.

When you flip over into the dedicated gaming mode with the hardware switch, you're dumped to a carousel-style app launcher that automatically pulls in most of your titles. A simple tap starts them, and a slide from the right edge of the display inward gives you access to a configuration panel with extra options, so you can set where the capacitive triggers are set to control taps on the screen, as well as those sensitivity settings I mentioned.

I can't anecdotally tell much of a difference between 120Hz and 144Hz on a 6-7" screen, but on compatible titles, the experience was super smooth, and I did appreciate the extra hardware triggers (though I'd like them better if they were actual buttons, not capacitive). The phone does clearly kick over into a higher performance mode by default in the dedicated gaming mode, getting much toastier to the touch, and it burns through the battery a lot faster.

It's also worth noting, though this phone has "5G" right in its name, specs for the phone claim its 5G support in the US is exceptionally limited. It only lists two bands: n41 and n78. In the US, that pretty much just Sprint's 5G. However, my phone reported a connection to T-Mobile's 5G network, which implies band n71 support. Reaching out to the company for an explanation, I was told explicitly that the device doesn't support T-Mobile's 5G, even though I was able to connect just fine. The FCC might want to take a look at that, because the phone is apparently connecting to networks it isn't certified to use. Red Magic told us in the future that it plans to provide better connectivity for US customers.

Battery life was also good — or, at least, I think it was good. I'd love to share more detailed screen-on metrics for a given day range in my typical use, but ZTE/Nubia stripped that feature from the Settings app. All I can tell you, based on what I remember of my charging habits and the data in Digital Wellbeing, is that it seemed good, usually offering multiple days of battery life for me. (Part of that is probably because I really didn't like using this phone, so I just didn't use my phone as much.)

Though it claims to support USB PD up to 55W, I never saw it charge above ~25W with any PD-compatible charger, including our benchmark 100W PD 3.0 charger. That's still plenty fast, just not quite what the numbers it claimed — it could be it can only do that with the dock, which I don't have. 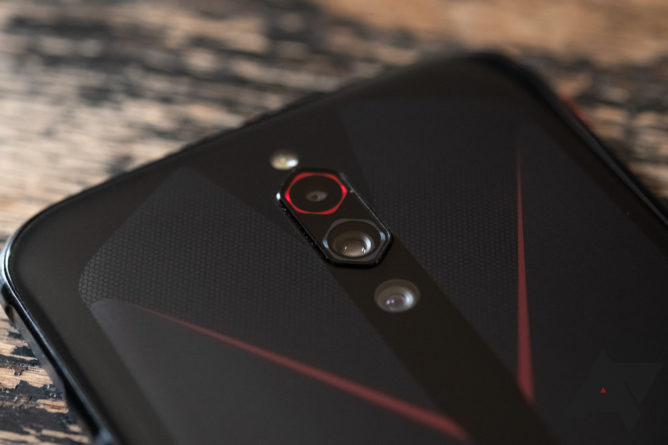 Before I discuss the camera results themselves, I need to make it clear that Red Magic 5G's camera app is terrible. You can't access the wide-angle camera in the default "Photo" mode, you have to switch to "Pro" mode, and the alleged "macro" camera is hidden in the left-most "Camera Family" section where it's pretty difficult to spot.

That's too bad, because the primary Sony IMX 686 sensor seems to do an okay job when it comes to actually taking photos. I don't think it competes with flagships, but results have acceptable detail and dynamic range, and that's more than I expected given the price and the fact that it's a gaming phone. Don't get me wrong, this isn't a great camera. Results often seem washed out, and low-light performance is poor, but it's above "at least it has a camera" territory.

Probably not. I haven't used a phone that covered such a range of advantages and disadvantages in quite a long time, and weighing my feelings for the Red Magic 5G has been difficult. On the one hand, it's an unbelievable value, with crazy specs for the price. On the other hand, the software is among the worst I've used in recent memory — it really rubbed me the wrong way, and I'd even prefer EMUI or Color OS to this.

As a sequel to the Red Magic 3S, I'm personally disappointed, and I do not like this phone. But, if you aren't picky about software (and a lot of people aren't), this could be one of the best deals you can get given the price. It's hundreds less than other Snapdragon 865-equipped phones, and a mere $100 more than last year's Red Magic 3S. On pure specifications, the Red Magic 5G is a winner, but this is probably one of the best examples out there when it comes to the old argument about there being more to a phone than just specs. 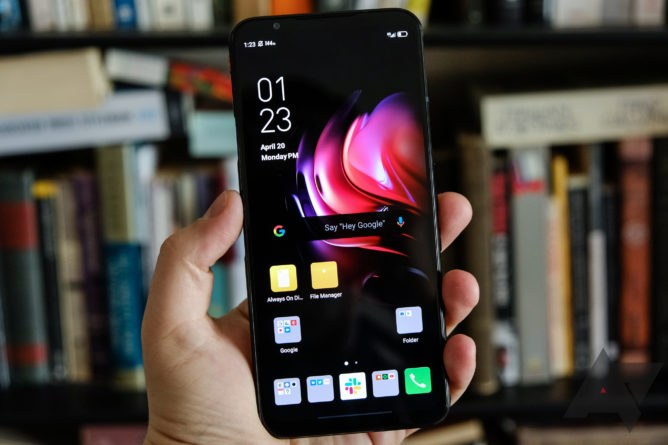 Gaming performance, by itself, is solid — at least, when games work. Fortnite freaked out thinking I had USB debugging enabled when I didn't, SafetyNet checks failed, and that's just the tip of the janky software iceberg on the Red Magic 5G. If you're just looking for a secondary device to play games, this phone could be a steal, but don't buy it to use as your actual phone.

Moto G Power and G Stylus review: Getting back to the basics, sort of