The coronavirus has led to lockdowns all over the world and left many people with less to no income or in fear of a recession. Combine that with closed factories, and you have a recipe for economic impacts rippling through all industries. The smartphone market is not immune to these effects, either, and worldwide shipments have fallen by 13% year-over-year (YOY) due to coronavirus. Companies moved only 272 million units in Q1 2020, which is the lowest level since 2013.

As Canalys reports, 2020 looked good for smartphone manufacturers before the crisis hit, but tables started turning in February. Companies were initially concerned they couldn't meet demand due to factory closures in China, and starting in March, sales plummeted, too. Due to the financial uncertainties surrounding the pandemic, Canalys suspects that "many customers who would have bought a new smartphone as a luxury have delayed that purchase." 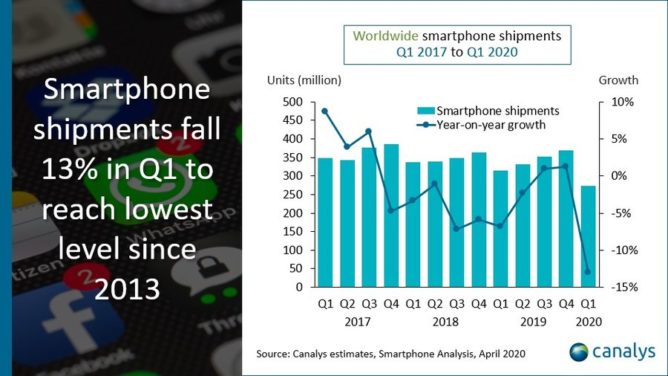 The only big companies currently left unscathed are Xiaomi and Vivo. They registered an annual growth of 9 and 3%, respectively, compared to Q1 2019. Since a lot of their phones are comparatively inexpensive, that makes sense: People who absolutely have to get a new phone (due to broken or lost handsets) will probably choose a less expensive option. Samsung and Huawei are the biggest losers of the quarter, both with a negative growth of 17% YOY. Even Apple is affected and shipped 8% fewer devices.

The worst might still be ahead of us, as Canalys states: "Most smartphone companies expect Q2 to represent the peak of the coronavirus' impact. It will test the mettle of the industry, and some companies, especially offline retailers, will fail without government support." China's 18% YOY drop in smartphone shipments in Q1 might indicate what's coming, as it's the first country hit by COVID-19. In fact, TrendForce predicts that the production will drop by 16.5% YOY worldwide in Q2.

Let's hope the majority of manufacturers can recover from the crisis, and I'm not saying that for smartphones' sake — after all, thousands of people could be affected by ensuing layoffs and bankruptcies.