As previously revealed in an app teardown, the Play Store has been preparing a feature that allows it to automatically install apps and games you pre-registered for. It looks like that function is now starting to roll out to first people. Some see a new option when they pre-register for titles that allows them to take advantage of the auto-install upon release feature.

To see if you're in on it already, head to the Games tab of the Play Store and scroll down a bit until you see a Pre-registration games section. Choose any title, like Hero of Empire, and tap the pre-registration button. You should be presented with two options then: Done and Also install when available. Depending on which you choose, a small note appears in the app listing, informing you that you'll either receive a notification when the game is available or that it'll auto-install once it's out.

Above: New interface. Below: Previous options. 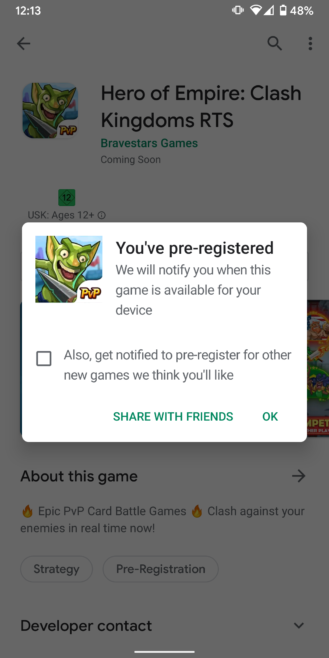 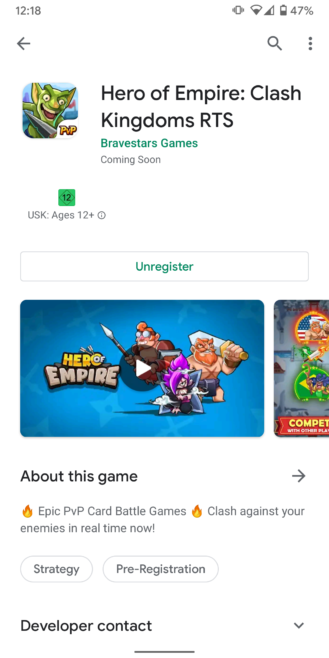 The previously available checkbox that you could tick to get notified about other new games Google thinks you'll like is gone in the new interface. It's still unclear if pre-registered auto-downloads will also start on mobile networks, but I'd imagine the Play Store will default to Wi-Fi only.

The option is live for some of us here at AP using Play Store version 19.8.15-all [0] [PR] 307848585 (and above). It's possible that the ability is rolling out as a server-side switch, but it might also be region-locked as Artem has the option in the US while it's not live for me in Germany. Either way, you can get the latest Play Store version over at APK Mirror — it might help you get in on the changes faster if the rollout is related to a specific minimum APK.