WeatherPro has been around on Android for more than ten years and has gone through changes on both the visual and the monetary front — the subscription-based app used to be a paid product back in 2018 before the company behind it joined forces with another one. Now, the app has received a comprehensive redesign, giving it a rethought bottom bar interface and a customizable home screen. That's reason enough for us to go hands-on with the app, mainly because we wanted to see if it can fill the vacuum left by Dark Sky's demise.

Unlike many other apps that tap into weather service providers' APIs to deliver their forecasts, WeatherPro uses its own data. Since the business behind the app also works with airports around the world, its data should be pretty accurate, which I can confirm for Germany, at least. The deal might be different for other parts of the world, though the US, Australia, and most of Europe should be covered. 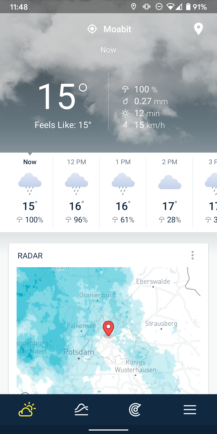 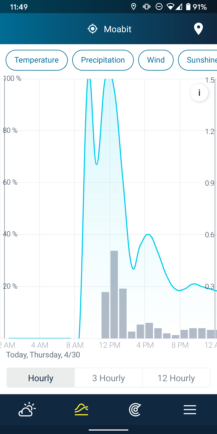 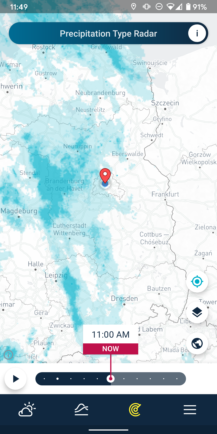 The app relies on four bottom tabs for navigation: a homepage, graphs, a radar, and a menu with settings and more. In the top right corner of the homepage, you have access to other locations. While the developers tout that WeatherPro is extremely customizable so that anyone can create their "personal favorite weather app," you'll quickly notice that you can only change and customize the cards that show up on the homepage, below a side-scrolling hourly forecast. Those are still more options than you can find in a lot of other applications, but if you don't like the basic four-tab layout, you're out of luck. There's also no dark mode.

By default, you're presented with a three-day forecast, a rain radar, and precipitation and wind graphs. You can change the order of these cards and customize them: The three-day forecast can be extended to show the next 14 days, and you can select a different set of data to display along with the temperature, like rain or wind details. Tapping the individual days brings you to a full overview of that day. The radar can be changed to one that shows you which type of precipitation to expect as well as an infrared satellite view that gives you an overview of cloud coverage. Tapping it or one of the graphs takes you to the respective section of the app to display more details. 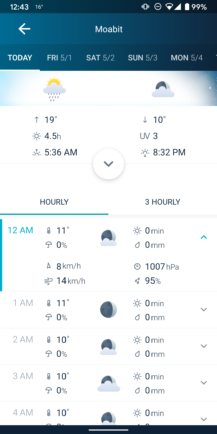 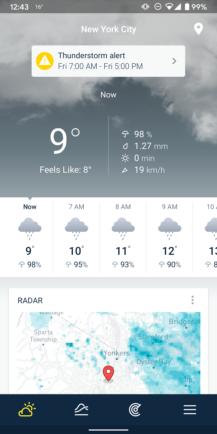 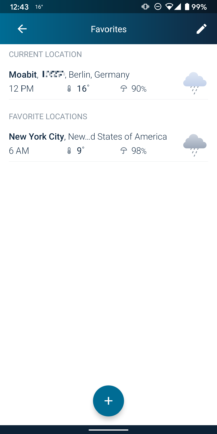 There are two bigger issues I've encountered while playing with the app: Radar animations are janky and anything but buttery smooth, and a recurring banner that asks you whether or not you like the app is a bit too needy as it appears whenever you start the app when you choose not to answer — the developers really want to hear your opinion on the app. It would also be nice if you could organize different locations' home screens individually. 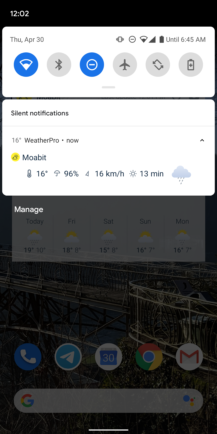 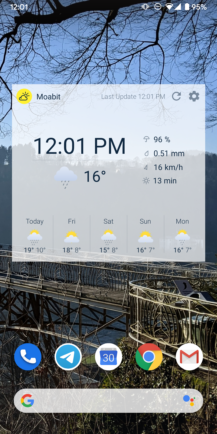 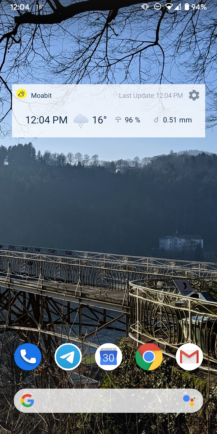 Like any weather app ought to, WeatherPro comes with widgets and an optional persistent weather notification. The widget is available in four sizes, one of which is resizeable to your preferences. When you add one of them, you can choose between a light and dark theme, which location to show, and its background transparency. There are no further customization options, though, which is also true for the notification that always gives you an overview of the current temperature, precipitation estimates, wind, and an icon depicting the conditions in the sky.

Other than the persistent notification, WeatherPro will also give you extreme weather warnings for heavy rain, snow, thunderstorms, and heat, but I've yet to receive one of these alerts.

While WeatherPro used to be locked away behind a one-time purchase, the basic functionality of the app has been free to use for about two years already. To get rid of ads and unlock more advanced customization options, you need to pay $0.99 per month, which seems fair and more sustainable than other monetization strategies. There's also a seven-day trial if you want to make up your mind first.

Just like Dark Sky and the recent AccuWeather Beta, WeatherPro lets you view upcoming weather conditions quickly, and the hourly forecast helps you judge if you need an umbrella or not. I still think AccuWeather's new, clock-like ReelFeel interface is superior when it comes to hyperlocal predictions, but WeatherPro definitely doesn't have a bad UI, either. Both still pale compared to Dark Sky's easily glanceable, color-coded graphs, though. On the other hand, you can tailor WeatherPro's home screen to your preferences, so its approach to weather is altogether different from Dark Sky and AccuWeather in that regard. 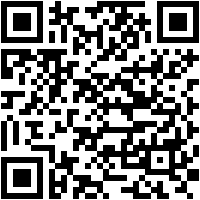 Mastercard says NFC payments have jumped 40% due to coronavirus concerns