A familiar-looking feature is starting to appear in the Gmail app for Android and iOS. Spotted in the last week or so, and confirmed by 9to5Google, a new card-based summary of things like purchases and flight details is now appearing just beneath the subject line of emails, sort of like it does on the desktop/web version of Gmail.

The feature was so familiar, we initially dismissed it as old when we first spotted it last week, but 9to5Google confirms that it is, in fact, new, after following along in its development.

The new card on a DoorDash order, and expanded.

The new cards show almost all the receipt-relevant information you'd expect, with details like the company, relevant dates, and an itemized list — at least, sometimes. Whatever model Google is using to parse data from your emails for the new card doesn't always work. In some cases, it's able to pull the total cost of a given purchase; at other times, the formatting seems to confuse it, and the same goes for things like delivery dates. While Artem's DoorDash order (above) confused it a little, other purchases are more straightforward:

More examples of purchases and flights.

Not all retailers seem to work, and even receipts from retailers that do sometimes work can bug out with specific purchases. I have some Amazon orders that worked fine, and others that don't. Flight details include things like your confirmation number, passenger name, flight duration, and take-off/landing times, divided on a per-flight basis for trips with multiple legs. 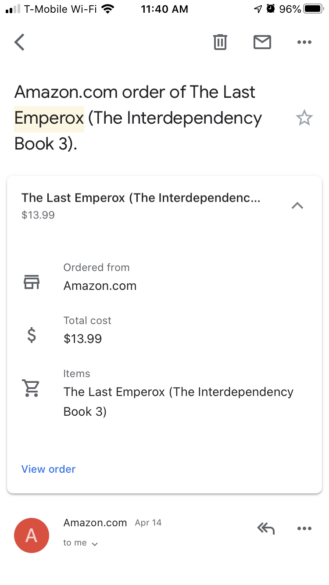 Above: Looks and works about the same on Gmail for iOS, too. Below: The cards we already have on desktop/the web.

We don't know if this change is tied to a specific version of the Gmail app, or if it's a server-side flag that's been remotely enabled, but the new card-based summaries seem to be rolling out widely.

Assassin's Creed Valhalla is launching on Stadia this holiday season