The artist formerly known as Hangouts Meet has seen a number of welcome improvements in the wake of the coronavirus pandemic, but until now only G Suite users have been able to use it free of charge. Google has just announced in a blog post that this restriction is being lifted, however, and anyone with a Gmail account will be able to use Google Meet for absolutely nothing.

Other competing products such as Zoom have become increasingly popular with everyone stuck at home — security concerns aside — and Google clearly feels the time is right to bring its rejuvenated app to the masses. Availability will be rolled out to more users over the coming weeks and you can sign up here to be notified when it's ready for you to use. This will allow Google to scale the platform gradually and hopefully avoid any performance issues as active user numbers increase.

your wish is our command. https://t.co/sndmgQ0qDO

Unsurprisingly, Google is advertising security and privacy as key tenets of the expanded service. Hosts will have the ability to accept, deny, mute, or remove other participants, and nobody will be able to join calls anonymously. Robust meeting IDs will be used to stave off random guesses from rogue users, and Google will encrypt all video content in transit and when recordings are stored in Drive. Google also promises your Meet data won't be sold to their parties or used for ads. There is one important limitation to note with the free version of Google Meet: video calls are limited to 60 minutes. This won't be enforced until after September 30, though, so you won't need to worry about that for now. 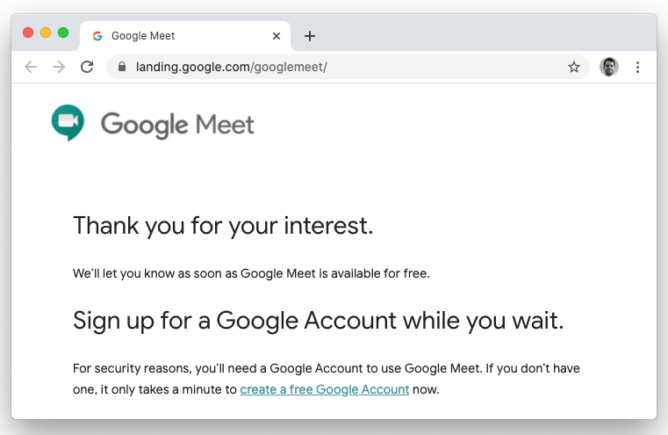 To be notified when Meet is available to you, enter your details here. You can use it in Chrome on desktop without downloading anything extra, or grab the app for Android or iOS.