WhatsApp has supported group audio and video calls since 2018, but you have always been limited to calling three other people at one time. During times of stay-at-home orders and quarantines, that might not be enough to stay connected with all of your friends and family. An update to the WhatsApp beta channel improves that situation as it raises the limit to up to eight participants (including yourself) for the first few users, but it involves a server-side change, too.

WABetaInfo reports that the first people using the current WhatsApp beta on Android (and iOS) can take advantage of the increased group size limit. When you're in on the test, you can start such a call by heading to the Calls tab, tapping the new call button in the bottom right corner, and choose the group call option. If the top app bar tells you that you can add up to seven participants, you should be good to go. Keep in mind that everyone on that call must use the latest version of WhatsApp beta, though, so it might take some time until most people can actually use these bigger groups. 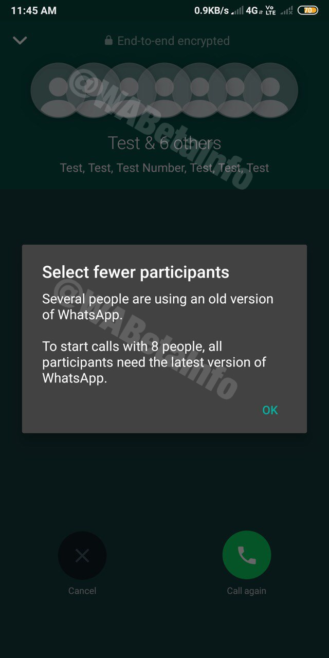 Warning when other people are using an older version of WhatsApp.

The feature is live for some on WhatsApp beta version 2.20.133, which you can get by signing up for it on the Play Store or by downloading it from APK Mirror. Since the functionality is rolling out via a server-side update on top of that, you might not be able to take advantage of it right away, but it should eventually come to everyone.

WhatsApp has officially announced that video and voice calls will support up to eight participants and shared that the feature will start to roll out in an upcoming release WhatsApp release on the Play Store. I can confirm that the raised group call limit is already live for me in beta 2.20.143, which you can get over at APK Mirror. Keep in mind that everyone participating in an 8-person group call needs to be on a supported version, so you might have to wait until the stable update hits the Play Store before you can start using the feature.

Update: Stable version 2.20.140 supporting the higher call participant limit is now rolling out and available on APK Mirror, too — no need to install beta software for group calls anymore.

The 5 best and worst things about the OnePlus 8