You can turn your home into a zoo thanks to Google's AR animals, but so far, you haven't been able to video record your interactions with tigers, alligators, bears, and others. As reported by 9to5Google, the company saw fit to change that and has silently introduced a video recording feature to its 3D viewer that lets you capture your AR visitors on video. That also works for other Google objects like skeletons, cars, planets, and more.

Provided the feature has rolled out to you, just search for an animal on your phone, like a tiger, and tap the "view in 3D" button in the results, followed by "view in your space." After setting up the camera, you can tap and hold the shutter button to create an up to 30 seconds long video. A new preview to the right of the shutter takes you to your photo app so you can view your clips and images. There's now also a share button in the bottom card below the viewfinder so you can send the 3D experience to other people right away. 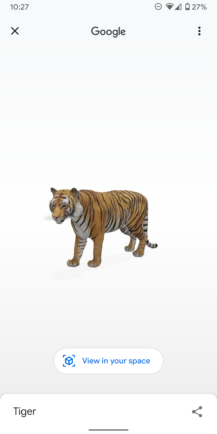 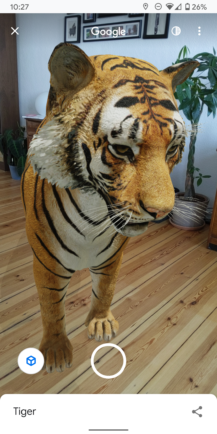 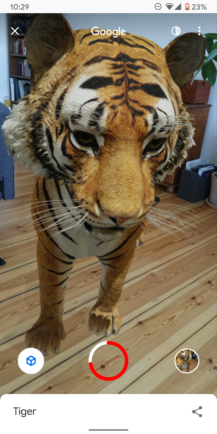 You could previously capture these 3D animals and objects on video by recording your screen, but you'd have to live with seeing the shutter button and system bars in it. While the integrated feature is brand-new for us Android users, iOS has allowed you to record Google's 3D animals for a long time already thanks to Apple's AR Quick Look.

The record option seems to be rolling out at the moment. If you don't have it yet, be sure to check back a bit later. While it's likely a server-side update, it's never a bad idea to use a recent version of the Google app, so make sure you're up to date on the Play Store or APK Mirror.