Google is killing Shoelace, a hyperlocal social networking app the company spun up just last summer from its Area 120 experimental products division. Most folks never got to use it, since it was an NYC-exclusive and, at least at one point, invite-only. Shoelaces formal death is set for May 12th. 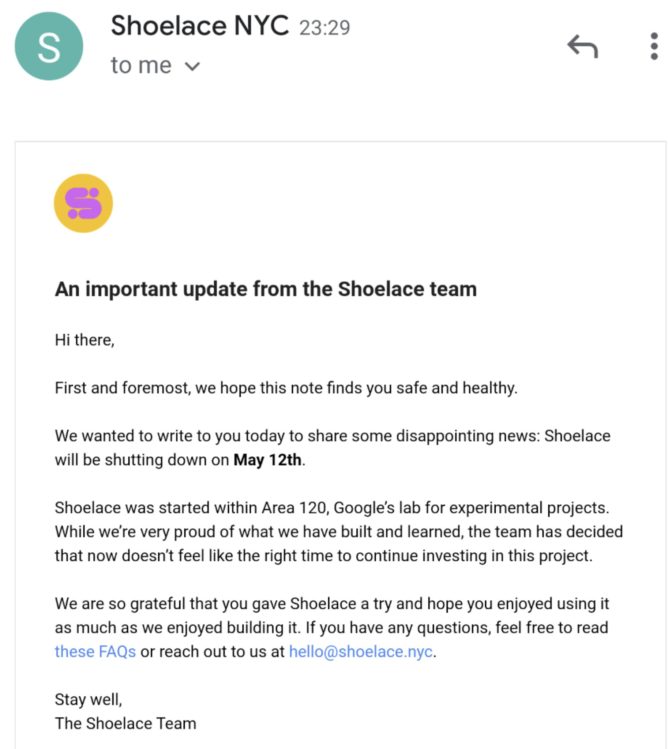 The app claimed to be a way to explore "community-powered events in NYC," allowing folks to join one of six communities in a handful of social categories, like nightlife, foodies, and lgbtq+ and join meetups/activities called "Loops" — get it, because you're in the loop? Anyway, the hope was that folks could meet like-minded people and build communities and friendships, expanding their circle of acquaintances in the big city over time.

This follows a temporary "pause" earlier this month, in which Shoelace suspended local meetups as a result of the Covid-19 lockdown, which hit NYC especially hard.

Emails notifying users of the shut down went out earlier today, pointing those with questions to this Google Doc FAQ. In short, Area 120 doesn't think right now is the right time to invest in the project, given current events, and it has no plans to "reboot" Shoelace in the future. Accounts and user data will be deleted by May 12th, though you can apply to receive a copy of your customer data if you'd like it here.

With its death date set for May 12th, Shoelace didn't even last a single year — though we have to wonder how well it was ever doing, considering it never expanded to other markets in that time.