Amazon's Fire tablets are media consumption devices first and foremost, and given their extremely low prices, it's perhaps not surprising that they rarely receive major OS updates. The last Fire tablet to receive a system upgrade beyond minor features was the 2014 Fire HD 6, which was updated from FireOS 4.x to 5.x. However, it seems like Amazon's entire line of 7th-generation Fire tablets is now receiving an update to Nougat.

Amazon's support site says FireOS 6 is now available for the 7th-Gen Fire HD 10, Fire HD 8, and Fire 7, all of which were released in 2017. Before now, only FireOS 5.3 was available for the models, based on Android 5.1 Lollipop. By comparison, FireOS 6 is a modified build of Android 7.1 Nougat, the same software that the newer 8th-gen Fire HD 8 and 9th-gen Fire 7 launched with. The update notification hasn't yet appeared on my 7th-gen Fire HD 8, so the rollout could be in the early stages.

I'm hesitant to give Amazon credit for updating its tablets to a four-year-old operating system, but it's certainly better than leaving them on Lollipop. The 2019 Fire HD 10 remains the company's only tablet running Android 9 Pie — here's hoping Amazon's 2018 models are next in line for an upgrade.

According to reports in our comments and on XDA Forums, the system upgrade seems to be FireOS 6 in name only. While a few of the system applications have been updated, the tablets still seem to be running Android 5.1 Lollipop under the hood.

We've reached out to Amazon for official confirmation, and we'll update this post again when we hear back.

We've reached out to Amazon multiple times about the OS updates, but we have yet to receive a full answer from the company's engineering teams. The help page now lists both FireOS 5.3 and FireOS 6 under all 7th-generation tablets, adding to the confusion. 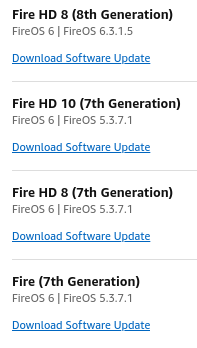