LG's got a new design language in the works — a fresh take on its phones that's supposed to usher the company into this decade with a clean look and some updated thinking towards flagship hardware. But before we turn the page to that next chapter, we've still got its first big 2020 launch to check out, the 5G-equipped, Dual Screen, 865-packing LG V60 ThinQ.

Granted, that's still a pretty steep bill, but compared to a $1,200 Galaxy S20+ or $1,400 S20 Ultra, the V60 stands out with its "mere" three-digit sticker price. We've seen what OnePlus has been able to do and slide in under that thousand-dollar mark — what about LG? Did LG make any serious sacrifices to give us a $900 phone, or is this one of the better flagship deals around? Let's take a look:

The last couple LG handsets I checked out, the V50 and G8X, looked very similar to each other, with smooth edges all around and glass backs that seamlessly blended into a curved, polished metal frame. Not only is the V60 noticeably larger than either of those models, but takes a major departure in terms of its construction. The frame is now much more prominent, with aggressive beveled edges that I really enjoy.

I only wish those edges extended for the full depth of the phone's body. Instead, LG accommodates the V60's internals by way a glass back panel that seems to “bulge” out from the much thinner frame. Only on the phone's bottom edge do we get a wider frame that looks more appropriate. 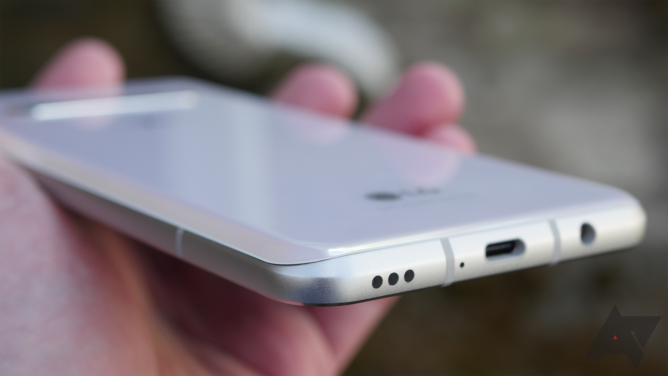 Give me that bottom-edge design stretched all the way around and I'd be a happy camper.

I imagine many V60 users are going to leave it in the Dual Screen case most of the time, but for those who do pop it out on occasion (which takes a little doing, as it's a much tighter fit than the G8X or V50 before it) the build of the phone itself is really decently done — while it still feels too large for my hands, I can concede that much.

After sticking with 6.4-inch screens on the V40 and V50, the V60 pushes us up to 6.8 inches, and that display feels just as big as it sounds. The good news is that panel quality is quite nice, supporting a wide brightness range and delivering consistent output. It's bordering on impractically large at this point, but I can't deny that it looks good. 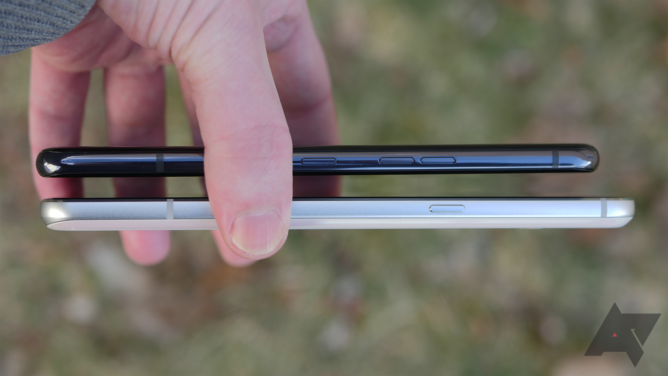 The screen conceals the V60's fingerprint scanner, another optical scanner like we got on the G8X. I was not too happy with the performance on that model, but I'm pleasantly surprised with the speed and accuracy I've been getting on the V60.

To LG's credit, it didn't just decide on making Dual Screen cases and move on — each time a new phone has come out, that Dual Screen gets a fresh design. The hinges this time around are largely the same type introduced with the G8X, but for the V60 LG takes the important step of upgrading the magnetic adapter you'll need to use the phone's USB port with the Dual Screen attached. 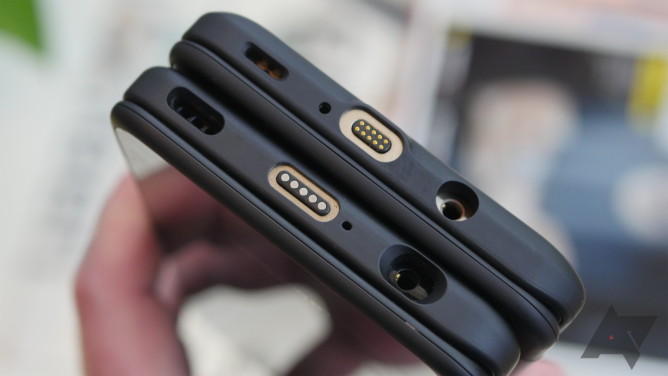 Last time around, the adapter only offered data connectivity and full-speed charging when connected facing one direction — so much for the reversible allure of Type-C. But with the V60, the adapter finally offers full functionality no matter how it's attached. I still hate that there's one at all, and drastically prefer the V50 Dual Screen's adapter-less design, but this is still an improvement.

Included with the V60 you'll get a 25W fast-charger, cleaning cloth, and all the usual paperwork, but that's about it — no bundled earbuds or anything. The Dual Screen accessory comes in a separate box. How you'll get that depends on your carrier — AT&T and Verizon are treating it as a free promotional offer that must be redeemed, while T-Mobile is just bundling it in outright (while also giving you the option to save $100 and forgo the Dual Screen entirely).

I'd never go out shopping for an LG phone specifically because of the allure of its interface, but I will offer what's some of the highest praise I can: I don't hate it. The company's customizations are largely unobtrusive, and don't actively get in your way. Compared to the G8X, not only are we stepping up to Android 10 but we also get some improved Dual Screen app support.

Of course, this being LG, you'd better get comfortable with the software that's on your phone, as it's anyone's guess when you'll see the next update arrive. 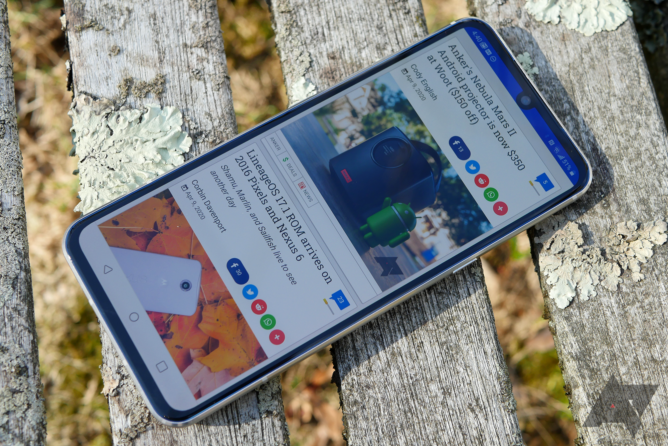 Even in bright sunlight, the V60 manages to hold its own.

LG very nearly nailed performance with the V60. With a Snapdragon 865 at its core, the phone's ably equipped to handle modern mobile processing needs. What's slightly less impressive is the handset's 8GB of RAM at a time when LG's peers are hitting 12GB. Admittedly, I've yet to reach a place while multitasking where that really felt like it was limiting me, but especially when you're dealing with two screens at once, I wish LG would have erred on the side of caution.

Two screens are better (and thicker, and heavier) than one.

To tackle the 5G market, the V60 is available in two configurations: one supporting mmWave that will be sold to users on Verizon, and a model that only focuses on sub-6 bands for AT&T and T-Mobile. For my testing I used the phone on T-Mobile, where in the Boston area I regularly get 4 to 5 bars. But even with solid 5G connectivity, you shouldn't expect crazy melt-your-face speeds; in testing I honestly didn't see an appreciable difference over LTE. That said, this is something that falls as much on the carriers as any phone-maker, and I'm finding it difficult to be too picky — cellular data on the V60 is as fast as you'll need. 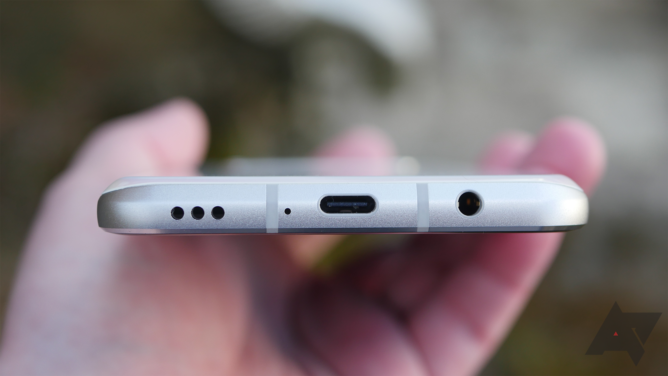 That round opening on the right looks so familiar but I just can't place it...

As for audio, LG once again lives up to its reputation. The on-phone speakers are nice and satisfying, delivering clean, loud sound. LG continues to fight the good fight for the noble headphone jack, which returns here with another quad-DAC setup. I only wish the output were a little more powerful, as I started to hit a volume ceiling when paired with a Grado SR80e headset.

Like Samsung, LG's got its own mobile payment solution, and just like its competition, LG Pay supports magstripe-emulation technology, letting the V60 interact with card terminals that lack modern NFC support. At least, that's what LG tells me, but the service is still so limited that it only supports cards from a handful of banks — and mine is not among them. 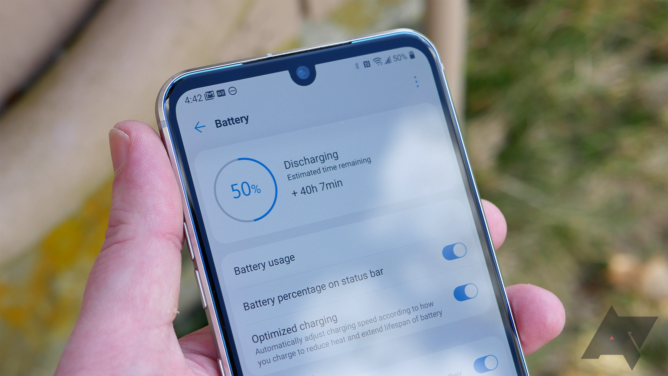 Finally, there's this hulk of a battery: a big 5,000mAh component. That's good because it's not just powering the V60's big 6.8-inch display, but also the Dual Screen when attached. Even with that burden, battery life is very comfortable, and you should have no problem seeing well past a day of operation per charge. While wired charging can still be annoying (if you're using the Dual Screen, at least), wireless always works in a pinch.

LG's V series has always been a place for the company to highlight audio and camera performance, and while that's still true with the V60, we don't have quite the same elaborate camera setup as in years past. Both the V40 and V50 offered a trio of cameras around back, and a pair of selfie cams. With the V60, that's knocked back to essentially two on the rear (plus a ToF depth sensor) and a sole front-facer. 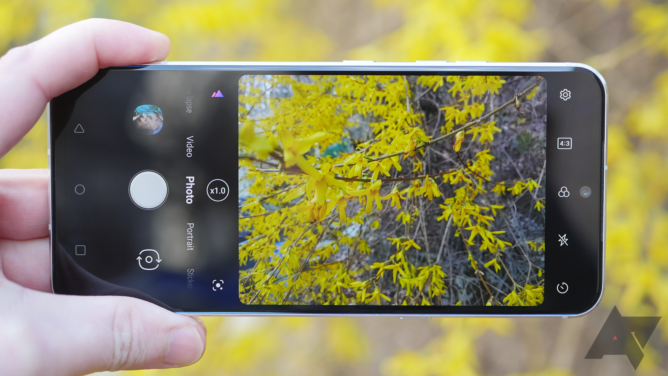 Despite what Contagion said, this Forsythia's not going to do you any good right now.

Despite having fewer options this time around, the camera still manages to perform alright. There's a 64MP main camera you're probably going to want to bin down to 16MP most of the time, as well as a 13MP wide-angle lens. As I've come to expect from LG, the camera offers some very flexible manual controls, and while the software does a satisfactory effort in auto mode, it's not quite up to Pixel levels of processing. 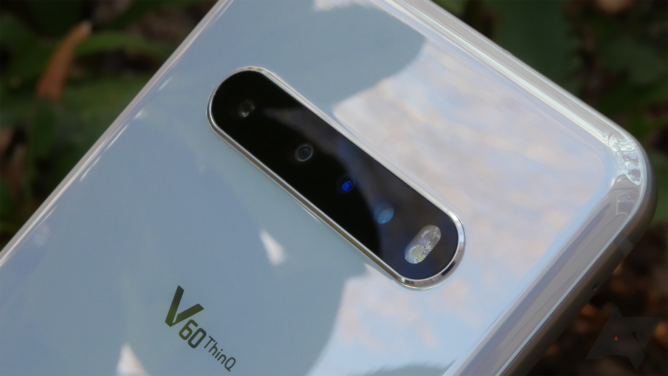 With the V60, LG's trying to do more with fewer cameras.

Of course, it wouldn't be a flagship camera without a few gimmicks. Maybe the most fun is the 3D Photo Effect portrait mode, which creates the sort of animated “wiggling” portrait you'll see where the fore- and background shift around a little. It's cute at first, but doesn't take a moment until you're distracted by all the processing artifacts and streakiness. And there's an 8K video mode that sounds pretty impressive until you realize you have nothing to play that content on, to say nothing of the fact that it all comes out very dark. If you're looking for more detail, you can crop to a 2x zoom, but things start getting bad as you push beyond that into hybrid territory, and processing artifacts start looking like an AI-generated mess.

In the end the camera's fine: capable and versatile, if lacking a little polish.

LG V60 Dual Screen
7.5/10
Sure. The LG V60 isn't the right phone for everyone, but if you love having a handset with a ton of screen real estate (to say nothing of what you get from that second display), top-shelf performance, and battery to last for days — and you'd like to have all that without dropping a solid grand on your purchase — this could be right up your alley. A few extra features would help seal the deal, but it's still really easy to find a lot to like here.
subscribe