Google Home received an overhaul last year that reduced its number of bottom tabs from four to two — only home control and a feed remain. The latter hasn't been populated by too much content, but a recent update to version 2.19 changes that, at least if you own Nest security devices. The feed now shows you Nest Cam events in the form of highlights and makes the whole history available for viewing. The update also gives smart outlets icons that better depict which devices they're controlling.

The enhanced feed will let you see priority events that have happened within the last 30 days as well as device activity overviews of the past two days. It also displays notifications you've received from your Nest security devices right inside the feed. To take advantage of this, you need to migrate your Nest credentials to your Google account, though keep in mind that once you do that, there's no way back. 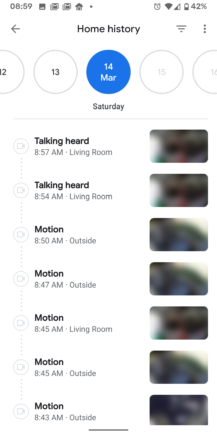 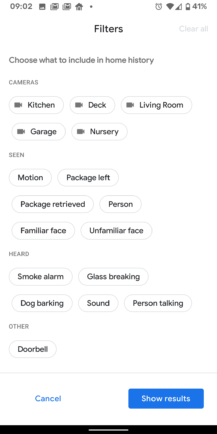 You can also look through your full Nest security cam history in the latest update under Settings -> Home history. The content can be filtered by cameras and what's seen and heard — you can have the app look for motion, left or retrieved packages, persons, and familiar or unfamiliar faces. On the audio side, there are filters for smoke alarms, glass breaking, dog barking, and persons talking.

Version 2.19 also improves the visual representation of smart outlets. In the past, you'd only see a generic outlet icon, regardless of what device you control with it, but now, Google seems to respect what you call the outlet and changes the symbol to match it. For example, if you control a lamp with a smart plug and call it "Couch Light" or "Night Light," the device will be accompanied by a bulb icon.

Additionally, there have been some changes to the lighting shortcuts on the home screen. Instead of the on and off buttons of old, there's now only one that opens a new slide-up with options to switch on and off all lights in your home or only those in specific rooms. 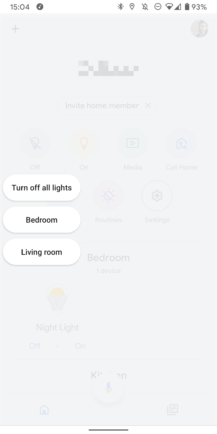 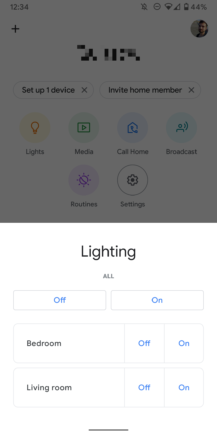 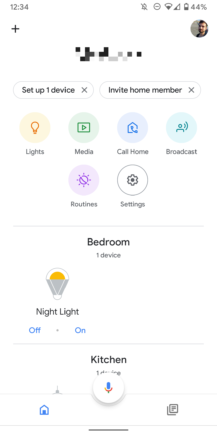 The changes are live in version 2.19 of Google Home, which is currently rolling out. Check the Play Store to see if the update is already available to you. You can also get it over at APK Mirror.

The lighting controls seen in the screenshots above have started to roll out more widely. Check your Home app to see if you've received them, too. It's more straightforward to use than the previous version as you can simultaneously turn some lights on and others off from the same menu. Thanks: Ramit Suri!

Samsung releases Home Up, a Good Lock add-on to further customize your homescreen