Vivaldi is among the most customizable Chromium-based browsers out there (following Opera's example) and made the jump to Android last year in the form of a beta. After extensive testing, the makers of the browser have announced that they're launching the stable release of Vivaldi today, complete with a slew of new features first seen in the latest snapshot builds: a desktop-like tab strip at the top, built-in tracker and ad blocking, and more.

The tab strip up top is the most obvious difference between Vivaldi and other Chromium-based browsers. It may seem like a waste of space and gimmicky at first, but it's incredibly helpful when you want to maintain an overview of your tabs without tapping the (still existent) tab switcher first. If you don't like it at all, it can also be deactivated from settings — if you just want to save space, you can alternatively hide the system status bar, too. 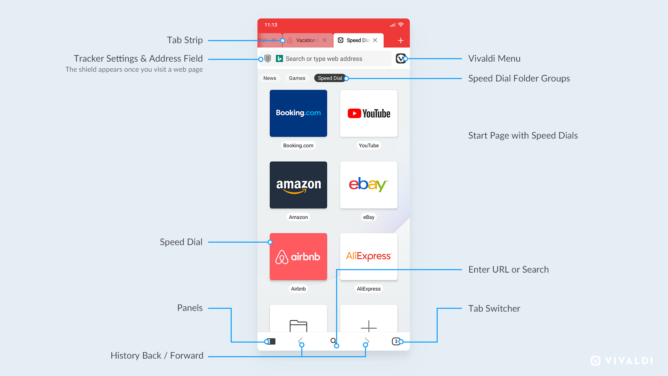 The rest of the interface is familiar if you've ever used Chrome Duet. You can find the address field and access to the menu in the bar below the tab strip while the tab switcher, back and forward buttons, bookmarks, history, downloads, and quick access to your speed dial and search (double tap speed dial) are at the bottom. Speaking of speed dial: It's like Chrome's collection of your most visited sites in the new tab page, but fully customizable (it's also one of Opera's headlining feature). When you tap the tab switcher, you'll find the standard grid layout as seen in Chrome before. 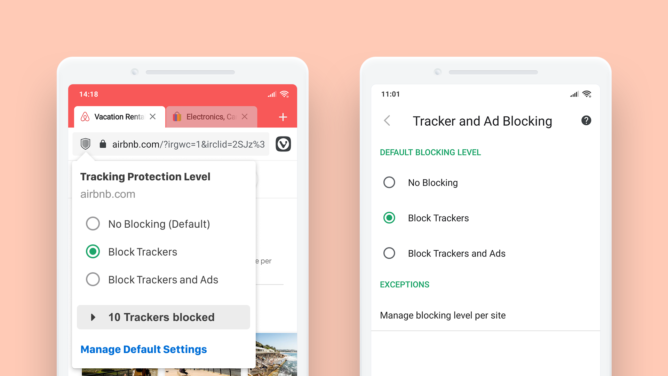 The ad and tracking blockers based on DuckDuckGo's Tracker Radar are turned off by default, but you just need to head to the browser settings to change that. They're adjustable on a per-website basis via the shield button to the left of the address bar.

Other features include built-in notes, scrolling screenshot capabilities, syncing with other installs of the browser, and support for a multitude of search engines. You can switch between these via nicknames, like "g" for Google, "d" for DuckDuckGo, or "e" for Ecosia. There's also a dark mode and an option to always show desktops sites if you have a particularly big screen. 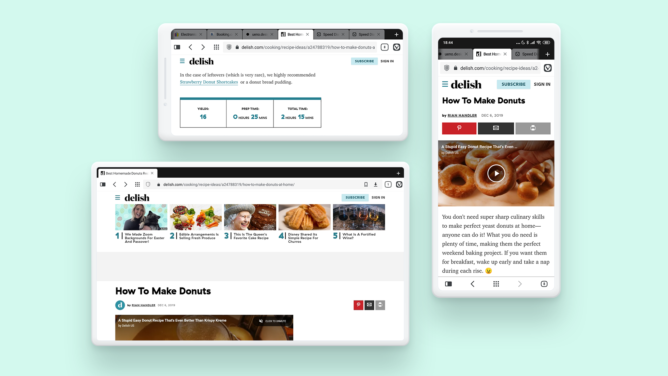 The browser rearranges its interface in landscape and tablet mode to use up less vertical space.

The new version of the browser replaces the beta build and should come to your phone in the form of an update if you've been using it before. The company has also launched Vivaldi version 3.0 for desktop operating systems today, coming with built-in ad and tracking blockers, improved keyboard navigation, and a clock with reminder and countdown support.

Grab two of Anker's PowerWave wireless chargers for $25 ($8 off)