The first folding-screen Galaxy got off to a rough start when many units started failing left and right, halting its retail release for several months. It didn't turn out to be a smash hit even later, mainly due to its sky-high pricing. Samsung’s reincarnated flip phone for 2020 wasn’t a true successor to the Galaxy Fold, but it did help iron out some of the initial design complications and helped make foldables more affordable. Now a new report claims that the second generation of Samsung's ultra-premium foldable would take cues from both the Galaxy Z Flip and the recent S20 line.

Two screens and the S Pen

According to a supply chain source, the rumored Galaxy Fold 2 (supposedly codenamed Project Champ internally) will use a slightly larger inner screen, measuring 7.6 inches from corner to corner. The AMOLED will have a resolution of 2213 x 1689 pixels (about 372 PPI) and will support the 120Hz refresh rate, as the S20 series does. Instead of a giant notch up top, the new display will use a single hole-punch camera that will sit in one corner, according to XDA. The upcoming Samsung foldable’s screen will reportedly be covered with the same ultra-thin glass (UTG) used on the Z Flip but with a harder top plastic layer.

Samsung seems to be going for the new top sheet to enable the use of the S Pen, which would’ve otherwise left marks on the comparatively softer foldable screen. We'll just hope that this tweaked screen doesn't end up like the fragile Z Flip's — don't get your hopes too high, just yet. Supposedly the Fold 2 would have a slot to house the stylus, like the Note series. XDA's findings say that the front of the phone will also undergo a major facelift, doing away with the current design that is heavy on bezels.

The Fold 2’s cover display is expected to increase in size to 6.23 inches and will take up almost the entire front. It would have a resolution of 2267 x 819 pixels and should stick to the conventional 60Hz refresh rate, while we might also get to see a centered hole-punch selfie cam on the AMOLED panel. Concept renders have been created based on this information. 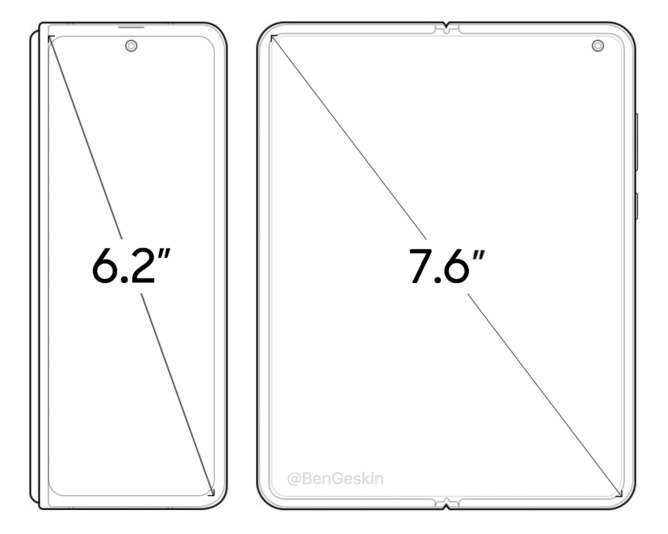 Design sketches of the alleged Galaxy Fold 2 by Ben Geskin

Samsung was reportedly testing the S20 Ultra’s cameras for its high-end foldable, but it might end up using those on the S20+. So, we could be looking at a 12MP primary sensor, accompanied by a telephoto, ultra-wide, and a ToF unit, while it’s not clear whether the front camera will have a 10MP or a 40MP sensor. As you’d expect, the Fold 2 is rumored to come powered by the current flagship Snapdragon 865 or its unannounced plus variant, if Qualcomm comes out with it in time.

The foldable would have a separate 5G variant in addition to a 4G model and is expected to house a battery somewhere between 4500mAh and 5000mAh in capacity. Samsung was also aiming for 45W charging speed, but it is said to have settled for 25W instead to keep heat dissipation in check. Reverse wireless charging might see a jump from 5W to 9W. Confirming some of the previous leaks, the XDA report mentions that the phone will be available in both 512GB and 256GB storage configurations, likely to give buyers a slightly cheaper entry point.

If the Fold 2 still doesn’t seem to deserve a premium tag in your books, then you might like to know that Samsung might be working on a more premium variant that’ll be made out of stainless steel and ceramic. However, the option will likely get a limited run and be exclusive to certain regions. We don’t know yet exactly what the alleged Fold 2's price would be or when Samsung plans to make it official.