If you're on the market for a phone packed with features, but don't want to break the bank, we've got a deal for you, as the OnePlus 6T is currently down to $300. It's not the latest flagship, at it was released back in 2018, but it does feature great features and internals. 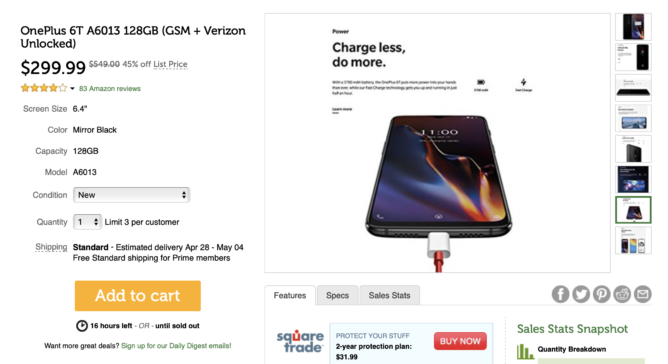 The handset is powered by a Snapdragon 845 processor, comes with a 3,700mAh battery, as well as a great camera. Despite its age, the device continues to receive software updates and is also one of the best options for developers and enthusiasts, thanks to its easily unlockable bootloader.

In his review, Ryne liked the phone's internals, responsiveness, and battery life, but was disappointed by the lack of headphone jack and water-resistance. If these aren't important to you, you should definitely consider getting the OnePlus 6T using the link below. Make sure you place your order today, as the deal is set to expire at the end of the day.

The device is only available in black in the 128GB variant, which comes with 8GB of RAM.