Between marathon Netflix binge sessions and Zoom calls with the family, we're all spending a lot more time online these days. And though we might be encouraged to stay six feet apart in public, we're closer and more connected with one another than ever before. So if you're getting tired of carrying your laptop between rooms at home, and your phone just isn't cutting it, tablets are the perfect middle-ground for content consumption and communication. But even if you're a die-hard Android fan, you should probably consider the iPad before anything else.

I should preface this by saying there are nice Android tablets out there, and Amazon's Kindle Fires are an incredible value and probably the best cheap content consumption devices you can get. But if you want the best tablet experience, you should really just get an iPad.

By far, the biggest advantage of having an iPad comes down to apps. iOS has more good ones. It also has more exclusives, it usually gets apps for new services or games first, and apps for iPads often make better use of big-screen layouts than Android apps do. Even if you hate iOS and its weird dated home screen layout, awkwardly monolithic Settings app, arbitrary and draconian default app restrictions, and the lack of deep Google services integration, the apps kind of make up for it. 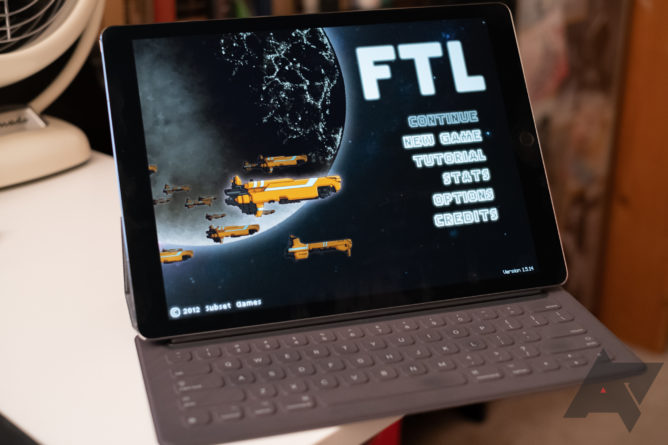 I will never not be salty that Android didn't get FTL. Also, don't buy that keyboard, it's bad.

You get well-known games like Civilization VI, FTL, ROME: Total War, and Hyper Light Drifter. It has powerful photo editing tools like Pixelmator Photo: a RAW editor that can almost go toe-to-toe with the desktop version of Adobe's Lightroom. If you prefer drawing to photography, iPads are also the only way to use Procreate, which is the golden standard for digital illustration right now. And if more office-style productivity is up your alley, award-winning apps like like Things, a popular to-do list/task manager,  and Bear, a powerful markdown text editor/note taker, can't be found on Android.

This is all ignoring the fact that apps available on both platforms are often just better on iOS. Although Gmail is up to parity on the two platforms now, other productivity/work apps (like WordPress, for example) offer a far better interface and experience on the iPad. Even the iPad version of Spotify spanks the tablet layout on Android, which is basically just a blown-up phone, and apps like Slack just run better. 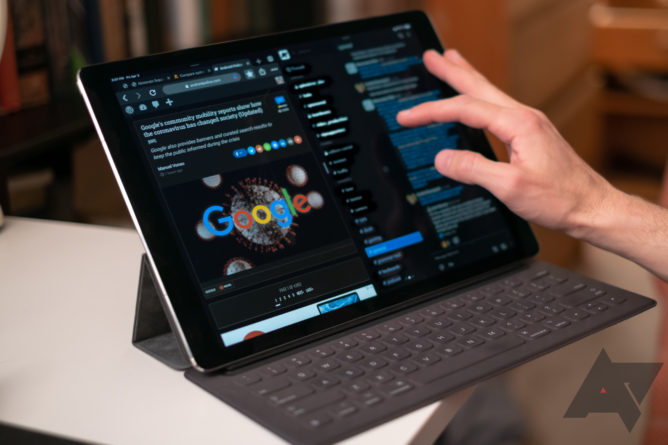 It won't beat a laptop for work, but you can get some things done.

Even in my personal experience as a blogger, able to do almost all of my job from the web, the iPad still offers a better overall environment compared to Android tablets (or even Chromebooks, sometimes). Importing and processing photos is a breeze, and multi-window workflows that have me interacting with our CMS in a browser, coordinating over Slack, and organizing coverage may not be as smooth as they would be on a desktop, but they beat the pants off an Android tablet.

Software isn't just about the apps you run, it's also about the system itself. Again, there are a lot of things to dislike coming from the relative freedom of Android, but iPads have one big advantage over most Android tablets, and that's Apple's relatively bonkers commitment to updates. Although the first iPad model only got updates for a couple years (about standard with Android), all the other models have gotten around 5-6 years of support. That's ages further than you can expect from an Android device — though it's important to note: Google has promised updates for its Chrome OS-powered Pixel Slate tablet until 2026. 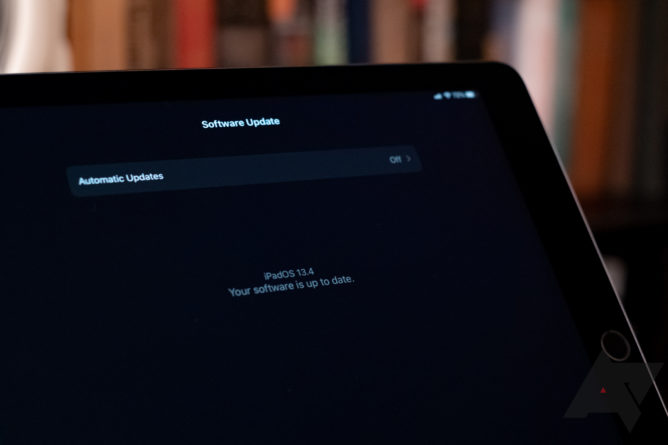 Even if you manage to get more than two years of updates from an Android tablet, the odds are pretty good it won't see any new features land later in its life. While Android manufacturers are content to switch older devices over to security-only maintenance updates after a year or two, Apple continues to deliver major new versions of iOS (now iPad OS) to its devices for far longer. A Samsung Galaxy Tab Whatever just can't compete when it comes to software updates.

Lastly, there's the hardware, and it's another area in which Apple does pretty well. iPads might not have AMOLED displays like the latest Samsung tablets do, but its screens are still among the best out there. If you can spend the cash, the iPad Pro line has super-smooth (and very bright) 120Hz displays, but even the 60Hz screens on the less expensive iPad Air and iPad have accurate color calibration and great brightness. That's not to mention how snappy Apple's A-series chipsets are — they really do fly on iOS.

In fact, Apple's hardware is so good, you can get away with buying an older model to save a bit of cash, too. Even a 2017 iPad Pro performs quite well in 2020 — I'm still using one, myself, and I see no reason to upgrade. But if you want something a little better, you can get an Apple-refurbished 2018 iPad Pro purchased directly from the company right now starting at just $550, though I think the base 2019 iPad is fine for most people, and it starts at just $329 brand new (and frequently much cheaper, it's often on sale). Do steer away from the super-old iPad and iPad Air models frequently sold for very low prices at places like Woot, though. 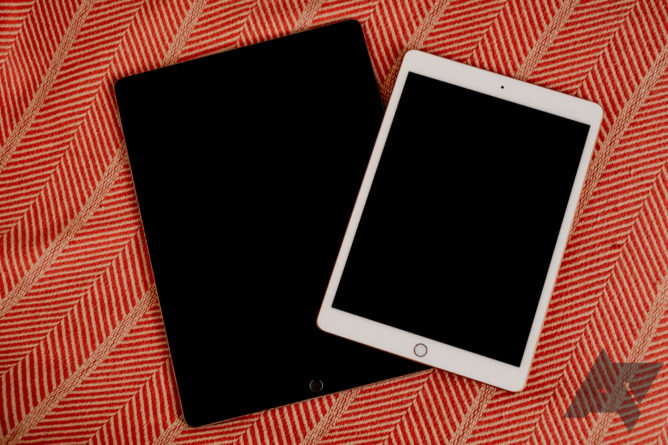 You don't need the "Pro" version, the base iPad is fine for most folks.

In fact, if you're willing to accept a refurb, Apple's deals are pretty decent, since they come with a first-party warranty and the option for extended AppleCare+.

And it's not just the iPad's hardware itself. When it comes to accessories, no other tablet is as widely supported. There's a crazy selection of cases, stands, screen protectors, and keyboards that Android tablet owners only wish they could choose between.

Even if you don't like Apple, or you think iOS is derpy and restrictive — which is, in my opinion, unarguably true — iPads really do offer the best big-screen tablet environment. A Kindle Fire should probably be the budget choice for a content consumption device given the value they represent, but if you'd like to get yourself something genuinely nice to enjoy as you're trapped indoors for the foreseeable future, just buy an iPad. You might even get some work done on it.

Ambient mode for Chrome OS to get glanceable weather information